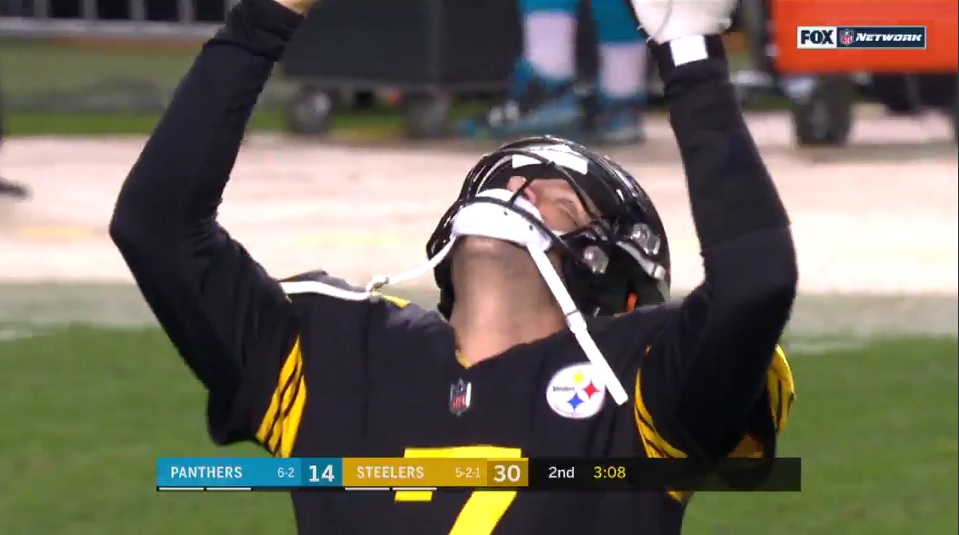 Following the 52-21 trouncing of the Carolina Panthers this week, the Pittsburgh Steelers now are riding a five game winning streak and boast a hard-earned comeback record of 6-2-1.

Most important, they are looking more and more like a team finding its identity. That is, one with a turbo powered offense, backed up with a scrappy defense.

Yet, following this dominant win over the Panthers, Steelers coach Mike Tomlin uttered my new favorite quote from him when he added an asterisk to his effusive praise of his team:

“But, we are probably not that good.”

Which does pose the critical question here: Just how good are these 2018 Pittsburgh Steelers?

I think if we’re all being honest with ourselves the current answer clearly is:

Fortunately, the Steelers have another seven regular season games to change that last bullet point into a happy face, and they are certainly trending upward in every category.

What will they need to do to get to the Promise Land? Is there enough time? Let’s Spin that one…and some other key points.

Something You Probably Haven’t Noticed

The Steelers offensive line has played probably its best two games of the year in succession. What you might not have noticed is Matt Feiler being a liability as the replacement for injured right tackle Marcus Gilbert.

That’s because he hasn’t been a liability. He’s added strength.

Once again, the greatest free agent acquisition by the Steelers organization in the past decade was nabbing Mike Munchak years ago to coach their offensive line.

He keeps churning out winner after winner. When you consider other bench mates Chukwuma Okorafor, who is another rising star on the offensive line and B.J. Finney, a reliable fill in and a fan favorite, this offensive line is talented to the core.

Also Under The Radar

Great teams have their stars which shine brightly in the evening stadium skies. But, they also have those players on their teams who continue to do the dirty work, in a beautiful way.

For years, Darrius Heyward-Bey has filled in every crook and unwanted cranny on specials teams and offense, by blocking, tackling and maximizing the blue collar utility of his world class speed and frame.

Add Roosevelt Nix to this list of players who do what they do with passion and unerring consistency.

Then there is Mike Hilton. Pretty much every time there is a big hit or a critical play on defense, number 28 is close to the scene of the crime.

If the Steelers go far this year, it will be certainly be due to their stars going super nova. But it will also be a direct result of the team-first mentality of the supporting cast of high character characters.

Nobody really cares if an individual or an organization makes mistakes. They care if you don’t learn from your mistakes. If we can tie this entire Le’Veon Bell saga into one tidy life lesson it would be please…please…please…get out of the multi-million dollar rehabilitation business.

If the signs early on are that your super-hot girlfriend is bat crazy, then don’t keep hoping you’ve got super powers to change things around. Bell left a trail of warning sign bread crumbs for the Steelers brass from the early days of his career. It’s sad they actually following them and jumped into the oven, wasting precious time, energy and team resources.

But it will be worth it all, if the next time, they see a disturbing bread crumb, or two, or three, they respond with expensively acquired wisdom.

Downhill Is The New Over The Hill

Every time Ben Roethlisberger makes a bad play, there is a deafening chorus of commentary crediting it to his aging body and withering old mind. They say he’s over the hill. Yes, he is. Which is why he’s racing downhill in his career and set to play the best football of his life.

If you haven’t noticed, the rules changes over the past decade have shifted the prime playing years of quarterbacks by nearly a decade. It’s well into in their 30’s when quarterbacks these days are able to leverage their experience, knowledge of the game and ability to read defenses into passing glory.

Big Ben played arguably his finest game of his career (at least statistically) against the Panthers, and if he is going to continue to get the ridiculous amount of protection from his offensive line he has been receiving, then the best is yet to come, and for a few more youthful years.

An Extra Point Of Victory

The most important performance of the Steelers victory over the Panthers? It might very well be that of struggling kicker Chris Boswell. Due to Big Ben’s prolific performance, Boswell was able to get live action practice on seven extra points, all of which he put through the uprights. This added to his 50 yard field goal will hopefully give him a total mental cleansing of all of his early year misses. Based on what we’re about to discuss…we need the Boz in full dependability mode.

Before you rush out and buy those box seats for the Super Bowl based on the Steelers trouncing of the Panthers, make sure you take a quick peek at the rocky roads ahead.

At Jacksonville against the Jaguars who embarrassed us last year in the playoffs. At Mile High Stadium against the Broncos where the ghost of Tim Tebow still haunts. Then you face the Los Angeles Chargers at home, who have been electric this year. Anyone with a ounce of history during the Tomlin era knows a game in Oakland is never an easy out. Then Tom Brady and his buddy Bill Belichick come to town. Then off to face Drew Brees in New Orleans. Finally, the season wraps up with a home game against the Cincinnati Bengals who, at that point, might still have a chance to win the AFC North.

Yeah. The Steelers have done a great job climbing their way back to the top. Now is where the real fun starts. This might end up being the most entertaining and challenging regular season we’ve enjoyed in years.