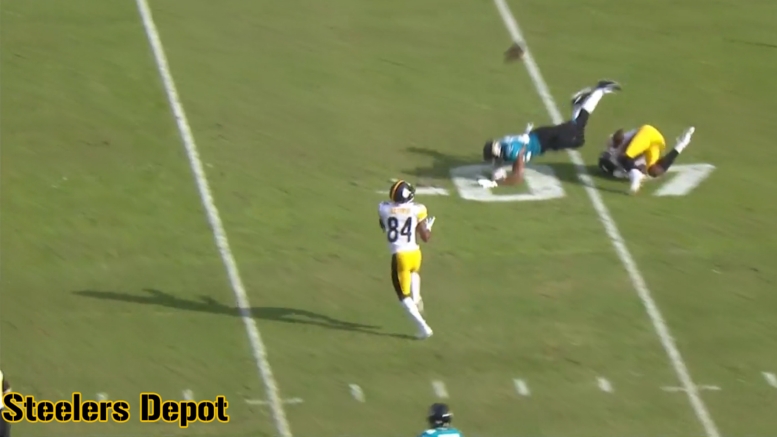 One of the biggest reasons that the Pittsburgh Steelers’ offense has been as successful as it has so far this season is, unsurprisingly, because they have playmakers on the offensive side of the ball. In this instance, however, I specifically am referring to their skill position players’ ability to produce yards after the catch.

In fact, they have been one of the best teams in the entire league in this category, which is notable given that quarterback Ben Roethlisberger has thrown more pass attempts than anybody in the NFL this year for the third-most completions.

More than half of the Steelers’ passing yardage this season has come after the catch, however, as the team averages 6.7 yards after the catch per reception, tied for the third-most in the league behind the Kansas City Chiefs and the San Francisco 49ers, while tied with the Los Angeles Chargers. And the Chiefs are the only real team with separation at 7.1 (before last night’s game). The 49ers are just .1 yards ahead of the Chargers and Steelers.

According to our charting, the Steelers have 1828 yards after the catch so far this season over 10 games, averaging 182.8 yards after the game per game. That is 56.7 percent of their total passing yardage, and it’s no surprise when you look at some of the big plays they’ve had.

Roethlisberger after all is third in the league with 11 passing plays of 40 or more yards and tied for ninth with 37 total explosive passing plays. A good number of them were on shorter passes that his playmakers turned into big gains.

For example, the Steelers so far have five plays on the season that featured at least 50 yards after the catch. Vance McDonald’s 75-yard touchdown came on a pass thrown 11 yards with 64 yards after the catch. JuJu Smith-Schuster turned a six-yard pass into a 67-yard gain on a slant. His 75-yard touchdown against the Carolina Panthers traveled 25 yards before he took it the remaining 50.

The team has another five receptions of 30 yards after the catch or more, including Antonio Brown’s 78-yard touchdown on Sunday, of which 35 yards came following a 43-yard pass down the field. his 31-yard game-winning score against the Cincinnati Bengals is another great example, coming on a pass thrown just a yard down the field.