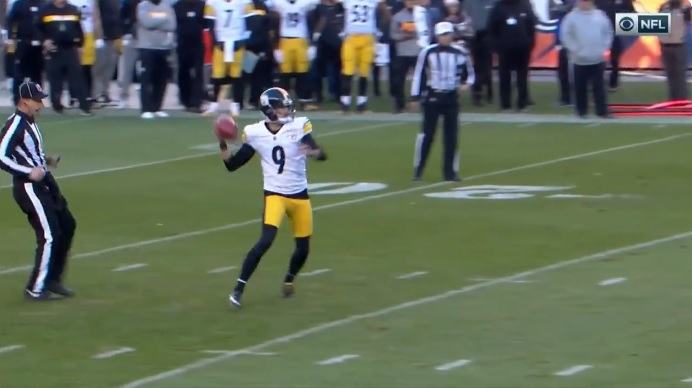 Bad loss today. But lots of weird for us to uncover.

– Have to get the obvious out of the way. Chris Boswell’s fake FG touchdown to Alejandro Villanueva. Based on my research, it’s the first time in franchise history that a true kicker (not a dual position player) threw a TD pass.

For Villanueva, it’s his first TD catch since this one in 2009 against VMI.

If you're wondering, this is the last TD Alejandro Villanueva caught. 2009 vs VMI. #Steelers pic.twitter.com/LAaIsXzL0I

Boz is the first Steelers specialist (kicker/punter) to throw a touchdown pass since Josh Miller hit Chris Hope for an 81 yard score against the Baltimore Ravens in 2003.

It was the first throw of Boswell’s career, college or pro.

– JuJu Smith-Schuster had a crazy game today too. His second catch of 97 yards, notching his first one against Detroit last year. He is one of two players in NFL history with multiple receiving TDs that long: Gaynell Tinsley is the other, doing so way back in 1937 and 1938.

He has two games of 180+ yards and a touchdown in his first two years, the first player to do that since Josh Gordon in 2013.

– Vince Williams is the first Steelers player, not just linebacker, with at least .5 a sack in four straight games since LaMarr Woodley in 2013.

– Turnovers are one obvious issue but the 3rd down success, or recently, lack thereof, is just as big a correlation for this team’s win or losses. Numbers don’t lie.