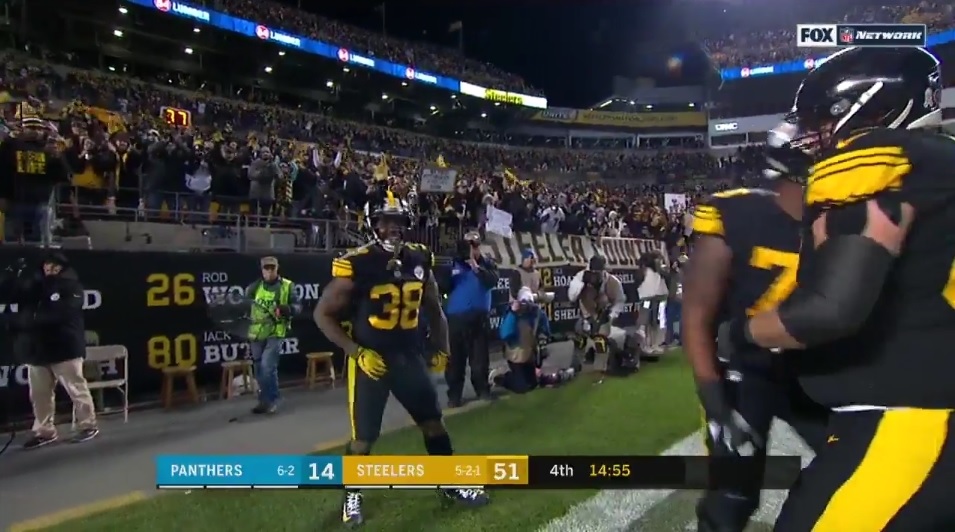 Ben Roethlisberger tossed five touchdowns on a night where his team put up 52 points, for primetime TV, against a really good Carolina Panthers team. But his favorite moment came with the game all but over. Asked after the win what his favorite touchdown pass was, Roethlisberger said he loved seeing Jaylen Samuels find the end zone for the first time.

“How about a guy getting his first touchdown? Jaylen Samuels. What an effort. It was a little screen play down there, going over the top. Wasn’t an easy play by him and I was happy that he was able to get into the end zone.”

Samuels’ reps increased in part due to the blowout victory but also James Conner’s injury, leaving the game early to be placed into concussion protocol. Samuels seemed to split work with Stevan Ridley, perhaps lifted out of Mike Tomlin’s doghouse after losing a fumble against the Cleveland Browns. Ridley finished with eight carries, Samuels with five.

Neither found much success on the ground, Samuels especially struggled, but he did his damage through the air. On four targets, he caught three passes for 22 yards and that touchdown, diving over the goal line and falling into the end zone. It was his first receiving touchdown since November of last year.

He was drafted nearly as much for his receiving ability as he was a runner, even if he is considered a running back. NC State used him as a chess piece and often asked him to split out wide as a receiver or run routes out of the backfield. Those traits were on display for his score.

“To see [the end zone] in the NFL for the first time, it was a beautiful thing,” Samuels told the Trib’s Chris Adamski after the game. “So hopefully it keeps riding up from here.”

Unfortunately for Samuels, that’s not guaranteed. If Le’Veon Bell returns, the Steelers will have to make a cutdown. That might not happen for two weeks, the time the team can place him on the roster exemption list as the roster’s 54th player, but soon enough, a decision will need to be made. It’s difficult seeing them keeping four running backs on the roster.

The one upside Samuels has is some work on special teams. He’s been used on the punt return team for several weeks and is one of the three players back for kick return duty, as teams are prioritizing having athletes in those spots as opposed to offensive linemen. Ridley doesn’t offer any special teams value. That could be the deciding factor in choosing a #3 running back, someone almost certain not to see the field if Conner and Bell are in front.