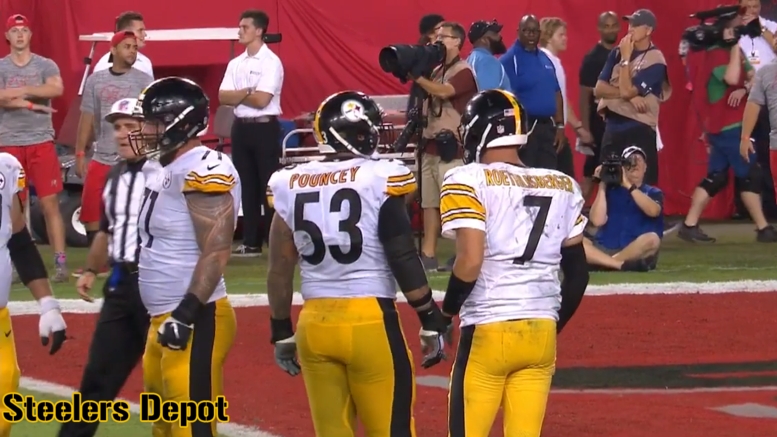 One of the more frequently talked about storylines coming from the Pittsburgh Steelers’ five game winning streak is the elevated play from quarterback Ben Roethlisberger. The veteran quarterback is coming off a perfect performance against the Carolina Panthers, in which he posted a perfect 158.3 passer rating. Roethlisberger has not only elevated his play back to an elite level over the last month and a half but he is doing a tremendous job at protecting the football. In fact, Roethlisberger is protecting the football just as well as his offensive line has protected him and it is not a surprise to see a pretty significant correlation between the two.

Over the five-game win streak in which Roethlisberger has thrown just two interceptions, the quarterback has also been sacked only three times. With three sacks over his last 186 drop backs, the Steelers’ offensive line has managed a sack percentage of just 1.6%. Perhaps most impressive is that the offensive line which has featured veteran starters like Maurkice Pouncey and Ramon Foster has also not missed a beat with replacements such as Matt Feiler and B.J. Finney. The unit’s superb play over the last month and a half is responsible for bringing Roethlisberger’s sack percentage down to a career low 3.1%. 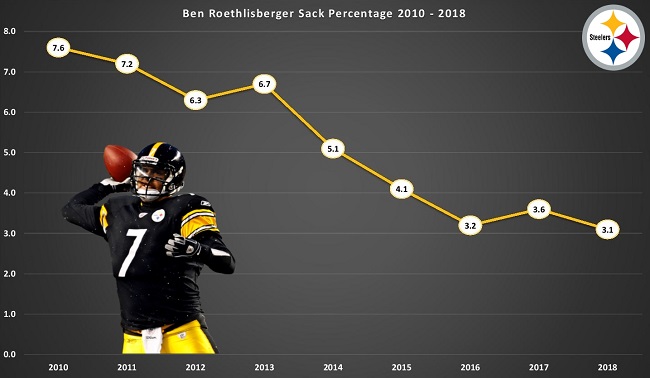 The offensive line’s low sack numbers have done wonders for Roethlisberger’s ability to protect the football. Over the season’s first four games, the Steelers’ quarterback threw for five interceptions and was sacked nine times. Compare this to the last five games in which Roethlisberger has thrown just two interceptions and has been sacked just three times.

Sacks and interceptions are drive changing plays with the potential to bring game changing consequences. Take a look at how Roethlisberger has been able to avoid these drive and possible game changing plays over the last five games. The veteran quarterback dropped back 195 times over the first four games of the season and threw an interception or took a sack on 7.2% of his drop backs. His interception and sack percentage drops from 7.2% to just 2.7% when comparing his first four games to his last five games.

There is no rocket science needed to see the correlation between Roethlisberger’s clean play and his clean protection. He has seen his interception percentage drop to 1.9% on the season which would be the quarterback’s lowest total since 2014 when he threw an interception on just 1.5% of his passing attempts. Ben’s clean pocket did the Steelers’ offense wonders in 2014 as they averaged 27.3 points per game, a personal best for the Steelers under Mike Tomlin. The 2018 Steelers are on pace to do even better though as the team is averaging an impressive 31 points per game.

It would be insulting to praise Roethlisberger and his offensive line without giving major credit to the mastermind behind the scenes. Offensive line coach Mike Munchak has continued to do wonders with the unit as he has once again extracted the most out of his guys. Whether it be the Pro Bowl play of left tackle Alejandro Villanueva or the impressive development of players such as Feiler and Finney, who have looked like starters when they have been called into action, Munchak continues to turn everything he touches into gold. The consistency of the offensive line has led to a clean Roethlisberger which has resulted in winning football for the Steelers.