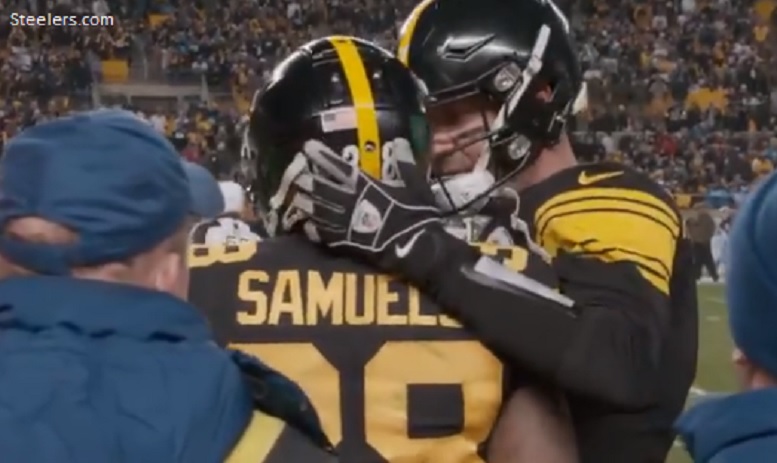 Now that the Pittsburgh Steelers know for sure that they won’t have running back Le’Veon Bell for the remainder of the season, they’re likely to continue with veteran Stevan Ridley and rookie Jaylen Samuels backing up starter James Conner. During his Wednesday locker room session with the media, Steelers quarterback Ben Roethlisberger was asked to give his thoughts on the team’s depth of the running back position behind Conner.

“I think it’s good, Roethlisberger said. “We have guys that have NFL experience, we have a young guy [Jaylen Samuels] that is getting experience. We’ll get them more and more reps, and then we’ll do some stuff with five-wides.”

In the Steelers Thursday night home win over the Carolina Panthers, Ridley and Samuels played 10 and 18 snaps, respectively, and that helped alleviate some of the load off Conner on a short week. Not to mention that Conner was checked for a concussion during the game. While neither backup running back set Heinz Field ablaze when asked to carry the football against the Panthers Thursday night, Samuels, who was drafted by the Steelers in the fifth-round this year out of North Carolina State, did score a late touchdown via a short pass from Roethlisberger.

“I like the effort, especially that particular play,” Roethlisberger said Wednesday of Samuels Thursday night touchdown reception. “A little screen pass, and it wasn’t like it was a walk in. It was combative, he had to jump over someone. He got hit, held on to the ball so what a way to get your first one.”

In case you missed it in the Steelers ‘Sights and Sounds’ video from Thursday night’s game, Roethlisberger also congratulated Samuels on the sideline right after his score.

“That’s awesome, I’m proud of you,” Roethlisberger told Samuels. “Way to get around, get in and make a play. Good job.”

Us vs. Them, and guess who we're taking. #SightsNSounds pic.twitter.com/YwrTRXDAe7

Even Steelers head coach Mike Tomlin had positive things to say about Samuels and the progress he’s made so far during his rookie season on Tuesday during his weekly press conference.

“I like his arrow as being continually as pointed up, but we expect that from him and all of the rookies, to be quite honest with you,” Tomlin said of Samuels. “He’s met that element of the challenge. He’s been a positive contributor to our efforts. It’s showing on [special] teams, it needs to continue to be shown on teams, and obviously in recent weeks when given an opportunity to touch the ball, it’s shown some of offense as well.”

While he’s not listed as a running back, we’ve also seen wide receiver Ryan Switzer line up some in the backfield so far this season and even carry the football a few times. In fact, he has 4 carries for 14 yards on the season with a long run of 8 yards entering Week 11.

Personally, I see no reason why the Steelers should go out and sign a different running back at this point just because it’s now been finalized that Bell won’t play any this season. It’s also probably worth pointing out that the team also has running back Trey Edmunds on their practice squad still should they need another one on their 53-man roster due to an injury situation.