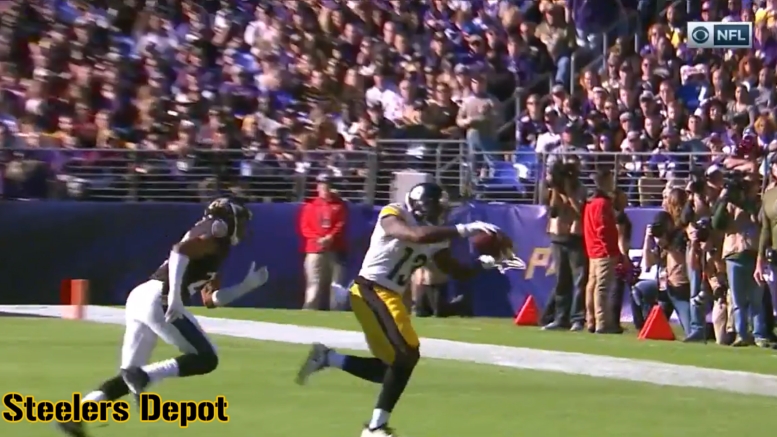 Pittsburgh Steelers rookie wide receiver James Washington got a helmet for every game leading up to the team’s bye week, in spite of the fact that the team has six players on the roster and only dresses all six of them if there are injuries to other positions that allowed for it.

That changed on the other side of the bye week when the coaching staff chose to dress veteran Justin Hunter over him, though he only ended up making one catch in the game against the Cleveland Browns if I recall correctly. He was targeted a couple of other times on less than crisp routes.

Washington got the call again on Sunday, bringing in two passes for 17 yards, though they came on five targets. Still, they were his first catches since Week Four, and it gives him just seven now on the season for a total of 66 yards.

The going has not been nearly as easy during his rookie season for Washington as it had been for JuJu Smith-Schuster a year ago. Through the halfway point of his rookie season, the latter already had 24 receptions for 424 yards and four touchdowns, and was catching two thirds of his targets. Washington has only caught seven of 19.

But simply getting the helmet again was a sign of progress for the rookie, which Randy Fichtner noted heading into the game tonight against the Carolina Panthers. He said it was a positive game for Washington on Sunday, and “a great type of environment to play in” as well, talking about how you start to learn that divisional games are different.

“I think early he probably was a little excited”, the offensive coordinator said, per the team’s communications department. “I think maybe a ball him and [Ben Roethlisberger] did not hook up on. He came back and caught that same pass, made a couple plays, did a nice job trying to block, did everything”.

Washington ended up playing 71 of the Steelers’ 78 snaps on Sunday. There were only five snaps on plays with three or more receivers on the field in which he wasn’t one of them, with Ryan Switzer taking most of them, but Darrius Heyward-Bey also got some looks.

“His time is coming. It’s been for no other reason, just things haven’t happened as quickly as you want, but I can still remember back” during Antonio Brown’s rookie season when he was a marginal contributor”, Ficthner noted.

“I know that time is coming for Washington”, he continued, “and we need everybody, and on a short week like this we definitely need everybody”.

In other words, it definitely sounds like we should expect to see the rookie keeping his helmet for at least another game, so perhaps we won’t be seeing a two dogs, one bone thing between him and Hunter after all.