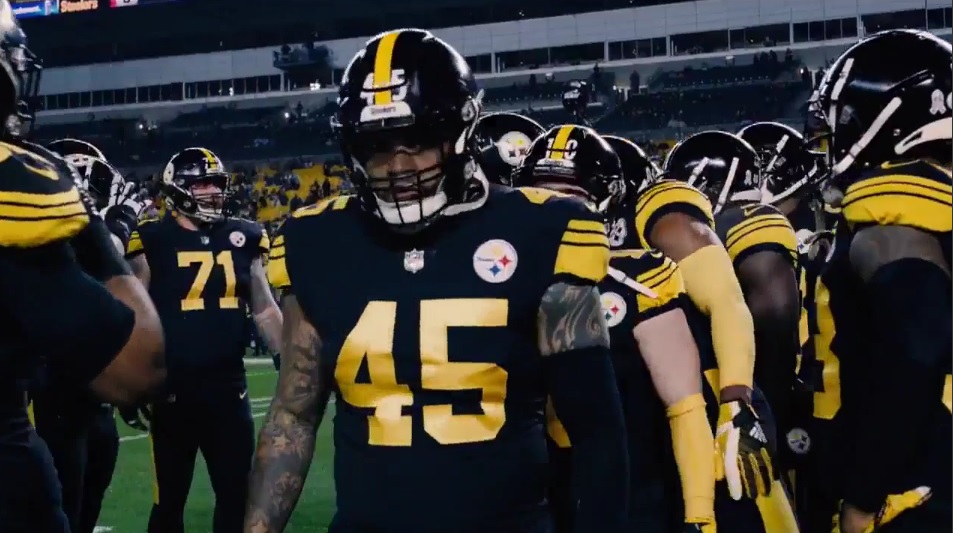 I watched the game from the comfort of my home for the first time this season. No need to dress up. My game jerseys stayed in the closet. Of course, my Pittsburgh Steelers paraphernalia was within hands reach. As an average Steelers fan, I cannot watch a game without my Terrible Towel.

Le’Veon Bell arrived in Pittsburgh this week but instead of signing a contract he played basketball and tweeted upside-down messages. Frankly, his antics are just a sideshow. Is he on the roster? No. So onto to the game.

Of course, we learned police pulled Antonio Brown over for driving 100 MPH on game day. I guess he did not want Bell hogging all the ink.

Matthew Marczi described what we should watch for in the game.  Ben Roethlisberger was near perfect operating the no-huddle offense. The defense remained disciplined and did not over pursue. The team reduced penalties and was productive on 3rd downs. Converted ours 8 of 11 times; and stopped theirs 7 of 11 times.

Alex Kozora described the factors that would lead the Steelers to win or lose the game. In sum, the Steelers win if the defense limits Carolina Panther’s misdirection plays; does not miss tackles and Ben is effective on the no-huddle offense. The Steelers are in trouble if running game gets untracked, Vance McDonald not involved enough, and penalties continue to plague the Black & Gold. Check, check, check, check, check, and check.

Dave Bryan laid out the five keys to victory. How many were accomplished?

This is how every Steelers game should be. Here we go!

The Panther drew first blood, but the wound was staunched quickly. Ben connects with JuJu for 75 yards on the Steelers first offensive play of the game to tie it right back up. The Steelers copied a play from the Panther playbook as JuJu gains 13 yards on a reverse. Ben passes to Antonio Brown to the right and left to stretch Carolina’s defense before running. Then, five straight plays to James Conner who runs strong and catches a pass. Conner scores to put the Steelers up 21-7.

The offensive line protected Ben all day before completing a 33-yard pass to AB. Julius Peppers sacked Ben on the next play. Eventually settling for a trey rather than a seven. The Panthers pull within ten, but Ben and AB connect for a 53-yard TD! Steelers lead 31-14 at the half.

Ryan Switzer makes another clutch catch to extend the opening drive. Darrius Heyward-Bey made his first catch of season for a first down. Conner running strong picking up 20 yards on the drive. Nice opening drive as Vance McDonald catches two passes. McDonald hangs on to the ball by his fingernails to score. McDonald converted two more 3rd downs in Pittsburgh’s second drive. He is a beast of burden. The 3rd quarter is not over and both Stevan Ridley and Jaylen Samuels have spelled Conner. Justin Reid takes a head shot on Ben after nice run and slide. 25. A melee as Dave DeCastro and Maurkice Pouncey right there. Pouncey grabs Reid by the grill to tell him this will not happen in our house. Reid, a real “stand-up guy” is ejected. Jesse James in for the TD.

Following a fumble recovery on the kickoff; Ben’s final snap of the day was the first snap of the 4th quarter. A six-yard TD to rookie running back Samuels. Joshua Dobbs coming into game with 11:01 left to play. Ben led the Steelers to score on all seven of his drives. Six touchdown and a field goal.

That’s the way the Steelers offense is supposed to be.

The Steelers deferred after winning the toss. Unfortunately, the Panthers sliced and diced the defense to score on their opening drive. The next defensive series worked out better. T.J. Watt almost sacked Cam Newton in the endzone but he just got off the pass. Vince Williams was there for the pick 6. Then defense holds on the next series. Pressure on Newton, keeping defensive lane integrity. Nice pass defense by Coty Sensabaugh.

On the third Carolina series, Vince Williams sacks Newton. Exactly as predicted. Once Carolina falls behind; them can apply pressure and their offensive line folds collapsing the pocket. The Panthers escape the 2nd and 18 to continue the drive but eventually punt. Heyward gets a sack. Defense disciplined but the Panther are slippery. After a challenge; Chris McCaffrey left inexplicably wide open to score. This seemed to wake up the defense again. Panther was moving the ball with screens but Steelers tacking the catch to limit YAC. T.J. Watt hit Newton hard to force a fumble which takes the steam out of their final drive of the half.

Bud Dupree with a sack to continue where the defense left off. Heyward sacks Newton again on the next drive. The game getting chippy as the defense playing fired up. Renegade played with 9:34 left in the game following a weak punt. It does not work as the Panthers move the ball to the 25-yard line. Artie Burns commits the Steelers first and only penalty of the game when he is too grabby in the end zone even though he had good coverage. But this game is over. The Panthers concede after this final score. The Panthers had the ball for less than 12 minutes in the second half. The defense had five sacks and a pick 6.

That’s the way the Steelers defense is supposed to be.

Chris Boswell converted 7 of 7 PAR’s plus kicked a 50-yard field goal. Jordan Berry had one anemic 28-yard punt but then followed up with a 52-yard beauty. The Panthers did return one kick for 36 yard that was erased by a holding penalty on DHB. But they also gave up a 31-yard return. Boz can kick touchbacks when needed and perhaps the Steelers should ask him to do more until they fix the coverage. However, Roosevelt Nix flew down the field to punch the ball out of Curtis Samuel’s grasp. Anthony Chickillo recovered, and the Steelers scored two play over so maybe not. Boz scoring perfectly, Berry pinning teams behind the 20 and coverage unit creating turnovers.

That’s the way the Steelers special teams play is supposed to be.

The Steelers met the standard in the 1st half but Steelers Depot respondents did not. Just 985 comments. Chad Sanborn had the “best” comment after the 16 seconds between the Steelers first two scores: “14 points on the board and we only ran 1 play!” Steeldog22 has a man crush as others of us do, “I like Randy Fichtner.” Canadiana found a future salary cap issue, “Great, now Rosie’s gonna want WR2 money….” Sir Notrightinthehead noticed that “Juju does not look fast, yet he outruns the defense.” Shannon Stephenson did not get his wish, “Let’s get a 5-minute drive TD then get the ball in the second half and do it again.” (The Steelers did score a TD, but it only took 1:54 which was too fast.) The defense impressed Alevin16, “This is the most energetic I have seen the D in a long time.” Hdogg48 summed up the fort half, “Best half in years.”

Steelers Depot respondents did meet the standard in the 2nd half with 1030 comments. The GrumpyHighlander observed that Alex Kozora would “Need two articles for all the winners.” Yeshaya agreed, “Winners: The entire 53-man roster of the Pittsburgh Steelers Football Club.” The Intense Camel was stunned, “Wow so this is what a stress-free game feels like huh? I like it.” ND_Steel gave a coordinator some kudos, “Fichtner is calling a great game…and on a short week to boot.” (How about Keith Butler though? The Defense seemed well prepared other than the first drive) Keneyeam was trying to track the radar, “Did I see AB speeding down the sideline in the first half?” Well done folks!

A complete game. As an average Steelers fan, I was expecting a much closer score. Guess that is the conditioning from so many games that I expected blowouts only to see them come down to a final drive. James Conner is in the concussion protocol which is a concern. There I extra time before facing Jacksonville but it is hard to predict how fast the recovery will go. Le’Veon Bell was tweeting during the game. We will find out if he decides to help the Steelers try to win a championship by Tuesday. But for now, I will bask in this victory. Dave Bryan asked for the top three MVP’s of the game. My answer was the offense, defense, and special teams.

This is the way Steelers game are supposed to be.

In the 2018 Memorial Day Weekend: Steelers Friday Night Five Questions, I committed to play songs that Steelers Depot respondents suggested might be the new Steelers anthem if Renegade by Styx was ever replaced. Here is entry 30 of 45 from Reg Sayhitodabadguy Hunt: Final Countdown by Europe.