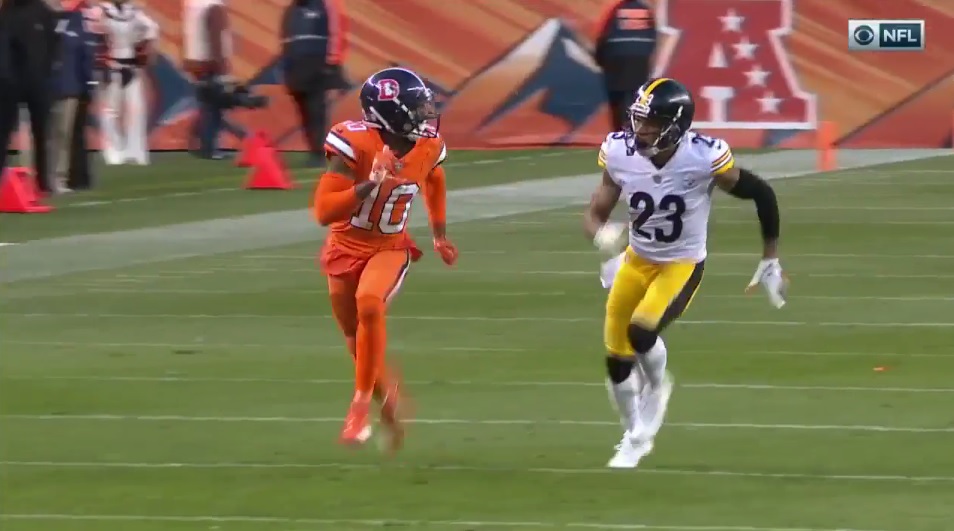 It was strangely quiet leading up to this game. Sure, The Pittsburgh Steelers had not beat the Denver Broncos at their house since 2009. But there was little drama. The biggest story was the impact of the sickle cell trait on the play of Antonio Brown or others in the Black & Gold. No matter that he had played there before. My wife and I agreed prior to the game that it was disquieting and we did not know what to expect. The usual pregame nervousness of a couple of fanatics. Surprisingly, large crowd at the Outta the Way Café given the holiday weekend and the game being nationally televised.

The Steelers Depot gave us specific things we should look for during the game. I always read these three articles prior to kickoff:

Matthew Marczi described what to watch for in the game.  Alejandro Villanueva and either Matt Feiler or Chuks Okorafor at right tackle. They will be up against edge rushers Von Miller and Bradley Chubb. Can the Steeler exploit the Broncos thin cornerback corps? James Conner has an opportunity to rebound against a weak Denver rush defense. Conversely, Denver has a highly effective running attack. Finally, how with wide receiver snaps be distributed after Antonio Brown gets his share? Ryan Switzer got several snaps at end of last game.

The Steelers positioned themselves to score in all four offensive drives in the first half. Randy Fichtner had a surprising plan. Instead of running the ball, the Steelers passed on 35 of the 43 offensive plays. Ben Roethlisberger was not sacked despite Okorafor starting at right tackle. At times, the offense employed misdirection that left receivers wide open. Antonio Brown passed to a wide-open Jaylen Samuels in the first drive. Had it been on target a big gain. Unfortunately, the field goal attempt was blocked. The second drive ended with the misdirection play to Xavier Grimble. Understand the rule, but it seems very punitive considering that if the ball had broken the plane of the goal line it would be a touchdown or if the ball went out of bounds at the one-inch line the Steelers would have first and goal.

The third drive was stymied by Vance McDonald’s pass interference. The call seemed lame to me as he just ran his route through the defender. The Steelers did manage a field goal. The final drive had people nuts. A shovel pass to JuJu Smith-Schuster was stuffed. McDonald missed a sure touchdown in the end zone. We all settled down to watch Chris Boswell kick a field goal until he didn’t. What a way to finish, a Boswell to Alejandro passing play from the field goal formation to tie the game at 10-10.

The offense feasted on big plays and then starved with poor play at critical moments. The Black & Gold had 5 drives in the 3rd quarter alone and just two in the 4th. Roethlisberger missed JuJu on the first play of the half. James Washington called for an illegal block and the Steelers punt their opening possession. The next drive was over in a flash. One play and JuJu goes for 97 yards and Steelers are up 17-10. The Steelers started the 3rd drive with 4 straight James Conner runs. A promising drive ends with Roethlisberger intercepted as he tried to connect with AB. With the game tied, the Steelers are back in the air. Washington blows a big play by inexplicably leaping for the ball when it seemed like he could have run right under it and if not a touchdown very deep in Denver territory. He had a bad game. Along with his blocking penalty he did not catch a single of the three passes targeted to him.

Game is still tied but feels like the game is slipping away. Jesse James catches a couple balls. Ben is sacked for the first time late in the third quarter. Then another well designed play had Conner gaining 23 yards before fumbling the ball away as he tried to hurdle a defender. In the fourth quarter, running the ball was completely abandoned as the Broncos score following the Conner turnover. Ben can’t convert a 3rd down pass to JuJu on the penultimate drive forcing a punt. The last drive had Ben scrambling for a 1st down to the 3. Ben opts to pass which is incomplete. Then he hands it to Conner who can only pick up a yard. Back to the pass which is intercepted. Game over.

The defense forced Denver to a 3 and out on the first drive. Following the blocked field goal, Denver managed a field goal to take the lead. Emmanuel Sanders burnt Joe Haden but did not catch the ball. Denver did manage a touchdown on their final drive of the half. Phillip Lindsay had a big 32-yard run that got them within striking range. Tunch Ilkin, Steelers Nation Radio claimed that Vince Williams was dragged down by a guard on the play, but no flag and the damage was done. The defense had no answer to two quick receptions to tight end Matt LaCosse. The second for a touchdown. Overall the defense looked good. Forcing two punts and limiting Denver to a field goal from a short field.

The defense tried to keep the team in the game. They forced four Denver punts. Vince Williams sacked Case Keenum in the first drive and Morgan Burnett prevented a first down. Javon Hargrave & Heyward combined for a sack in their last drive which also ended in a punt. Both Denver scores came after turnovers. Their first was after Emmanuel Sanders burned Joe Haden on a 38-yard reception. Denver’s only sustained drive was after the Conner fumble. The 11-play drive had safeties Terrell Edmunds and Sean Davis making 6 of the tackles to open the fourth quarter. Five passes that seemed to be targeting Edmunds and five of six successful runs. The defense was gashed on this drive. The Steelers only sacked Keenum twice all game. Significantly, they forced no turnovers.

One of the sideline views that was interested was an intense conversation between Coty Sensabaugh and T.J. Watt. At one point, Cam Heyward appears to intervene, but Coty is having none of it. Would love to learn what was going on.

A blocked field goal. A 41-yard field goal. A fake field goal. I am confused about the rules. Didn’t think the long snapper could be interfered with and that leaping the line was illegal. Both appeared to happen but no flag. Does the Denver special teams coach have a trick that falls within the rulebook? It was nice to see Chris Boswell nail the 41-yarder. It was awesome to seeing him complete the pass to Alejandro Villanueva for a touchdown. Gutsy call but risk worth it since they would be receiving ball to open the second half.

Surprise, 8 kickoffs and all were touchbacks in Denver’s thin air. Jordan Berry had three solid punts. Two behind the 20. The other was a 52-yard punt with a 6-yard return that effectively reversed the field to Denver’s 27-yard line. Ryan Switzer had an off day. He muffed two catches but luckily the Steelers kept the ball and only had a six yard return on his third. On another punt, he signaled a fair catch but let it bounce with the ball ending up on the 3. JuJu’s big play made it a non-factor.

678 1st half comments on a holiday weekend. Mister Wirez had a lot of people agreeing that “Jim NANTZ passive aggressive Denver fan.” I listen to the SNR instead of the national announcers to avoid the aggravation.

Kevin Schwartz vexed at the NFL rules on Grimble fumble, “I’ve never fully understood that rule.” He expounded that, “It’s not intended to be cosmic justice. You don’t lose the ball if you fumble out of bounds normally. Why would you there?” Nunya didn’t like some of the uncalled holding by Broncos defenders, “Well, I just learned it’s ok to hold a receiver’s arm down before the ball gets there…sweet!”

Meanwhile, Chad Sanborn liked the play calling, “2 trick plays. Both caught them off guard. The AB throw could have been an easy 7 if he made a better pass. I HOPE that we see them again in the playoffs.” And at the end of the half, #7 shared many of our thought, “Gotta hand it to Tomlin there. That was a fantastic and ballsy call.”

Steelers Depot respondents met the standard in the 2nd half with 1182 comments. The “best” comment of the half was after Juju’s 97-yard touchdown. All agreed with SkoolHouseRoxx who saw that “That play took the life out of that team and crowd!” Presciently, Chris92021 cautioned that “I dunno Skool. Better score again just to make sure lol”

Thomas Hmmmm was bugged by a commercial, “Why the **ck have a commercial with a guy screaming the entire commercial? Talk about a commercial that annoys the hell out you and makes you want to boycott the product.” And then later by the refs missing calls, “What a hold on Dupree… Jeez.”

SkoolHouseRoxx noted the high tackling by Denver, “Is it me or are the really grabbing by the head and neck area?”

Ryan72384 shared our frustrations, “What a sickeningly frustrating game. Should have won by 30 and then Ben pads his red zone int lead. Awful, awful decision.” The Intense Camel summed up the game succinctly, “Steelers 24 Steelers 17.”

One young player played great. Chuks Okorafor played all 78 offensive snaps at right tackle. Ben was not sacked until late in the third quarter. Three young players hurt the Steelers badly in this game. Xavier Grimble trying to bull through a defender instead of cutting in to waltz into the end zone. James Conner hurdling a defender and losing the ball instead of wrapping it up after a 23-yard gain. James Washington leaping instead of running under the pass. Up to 21 points erased off the board and overshadow huge plays like JuJu Smith-Schuster’s 97-yard masterpiece and Bowell’s TD pass. Not to mention their own potential big plays. Ben’s two interceptions piled on. Making a game that was so close seem like a blowout loss.

Next up is a much better opponent in the Los Angeles Chargers. Mike Tomlin and his staff have their work cut out. Not scheming, they had a great game plan. Kudos especially to Randy Fichtner but also Danny Smith and Keith Butler. They must bolster their players confidence in themselves. These young players must flush those bad plays from their memories and be prepared to perform or the Steelers will suffer a real blowout this coming Sunday night.

In the 2018 Memorial Day Weekend: Steelers Friday Night Five Questions, I committed to play songs that Steelers Depot respondents suggested might be the new Steelers anthem if Renegade by Styx was ever replaced. Here is entry 32 of 45 from FlaFan47: Enter Sandman by Metallica.