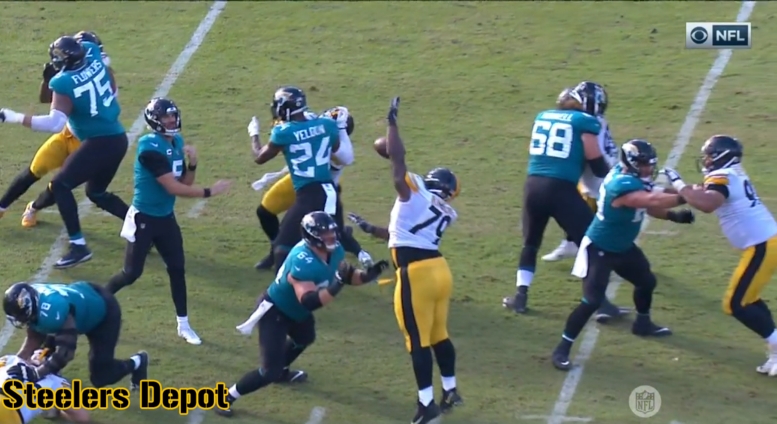 It’s somewhat astounding to me in hindsight that for as dominant as the Jacksonville Jaguars offense seemed to be in the first half, when you actually go back and look at their on-field trajectory, the Pittsburgh Steelers defense actually held them out of the red zone. They reached the 20-yard line twice, but never got inside. And they had to settle for three field goals, even though two of their seven first-half drives began in Steelers territory.

But it was the second half where the defense really picked up the game. Outside of a single 80-yard, 10-play touchdown drive, the Jaguars were anemic, going three-and-out or worse on eight of their nine final possessions going back to the final two minutes of the first half.

Said Head Coach Mike Tomlin after the game, “that’s football, man. That’s team [sports]. Like I said, we weren’t perfect today, but we did the job, and doing the job is rising up and supporting your brother. There was a lot of that today because there was a lot of failure today. But that failure has got something to do with the execution of Jacksonville”.

The Jaguars controlled the game in the first half, rushing for well over 100 yards and getting some extended drives, including a field goal possession that lasted just shy of nine minutes. The Steelers’ offense by that point had only been on the field for 3:41 over two possessions, the defense seeing work for just one second shy of 13 minutes. That incredible discrepancy, over five full possessions in the game, can break a unit.

“When you’re absorbing the type of snaps that they were absorbing, usually you erode as the game wears on”, Tomlin said in explaining his group’s resilience. “They didn’t. hopefully that’s a sign of the makeup of the group. We’ll see”.

To that point, the defense has held every opponent to 21 points or fewer during their six-game winning streak, and to 18 or fewer in four of those six games. The Carolina Panthers only got to 21 points with a meaningless late touchdown in a 31-point loss. The Cincinnati Bengals finished with 21 points, which at the time provided the margin of victory before the Steelers came back to win.

The defense has struggled to get off to good starts, it is true. Even when they didn’t allow scores early on, such as today or against the Cleveland Browns, they have given up a lot of ground before the unit would settle late.

While it would be preferable to come out of the gates ready to stop any offense, it doesn’t always work out that way. And when it doesn’t, you simply have to adapt and adjust, as they did today. They held things down enough to allow Ben Roethlisberger and company to come back and win.