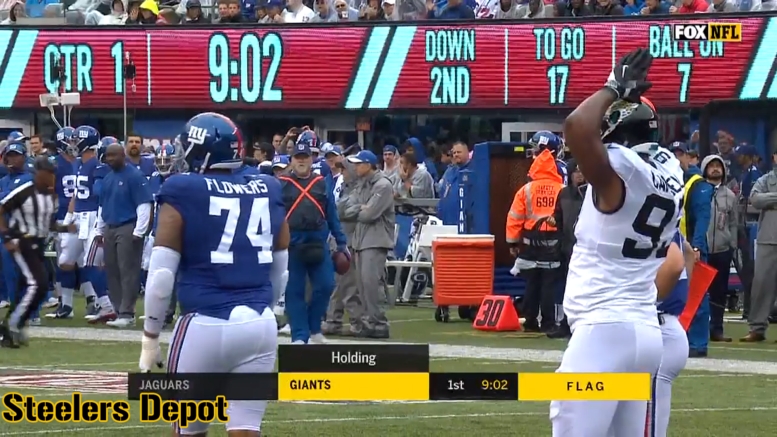 Be glad you’re not fans of the Jacksonville Jaguars this year, Pittsburgh Steelers fans. They are about to start their fourth different left tackle this season due to injury. And not only that, that tackle is going to be former New York Giants first-round draft pick Ereck Flowers, one of the more reviled draft picks for that franchise in recent memory.

The fourth-year tackle out of Miami was an instant starter for the Giants during his rookie season, starting all but two games (for which he was inactive) during his first three seasons in the league, but he was widely and routinely criticized for his play, especially in pass protection and in drawing penalties.

It got to the point where New York felt the need to go out and sign Nate Solder in free agency. They tried to move Flowers over to right tackle, but he wasn’t cutting it, so they cut him. He ended up in Jacksonville and now will be starting against the Steelers tomorrow.

And that has been a winding road as well. Their intended starting left tackle has been Cam Robinson, a rookie last season who came in and secured the job from day one, but he suffered a season-ending injury back in Week Two. His replacement, Josh Wells, also ended up on injured reserve.

Their most recent starter has been Josh Walker, originally a 2014 undrafted free agent who first joined the Jaguars last season. He had never started a game before replacing the injured Wells, having started the past four games, but he did not practice this week and has been ruled out.

That means Steelers right outside linebacker Bud Dupree will literally be facing a fourth-string left tackle, and one who only has had a limited amount of time in the Jaguars’ system, making his first start with this group of linemen.

He rightfully should be salivating over the matchup, and is coming off one of his best games of the season against the Carolina Panthers and their so-so left tackle, during which he was able to record his fourth full-credit sack of the year to give him 4.5.

This would be a golden opportunity for the fourth-year veteran to pad his sack numbers a bit. I would love to see him come out with two sacks against Flowers, though the Jaguars will likely be prioritizing the running game.

They won’t have much choice but to pass if the Steelers offense is able to do its job and score points as they did the last time they played this defense, though. Pittsburgh’s pass rush has shown that it can be very effective when their rushers are able to pin their ears back and let it rip.