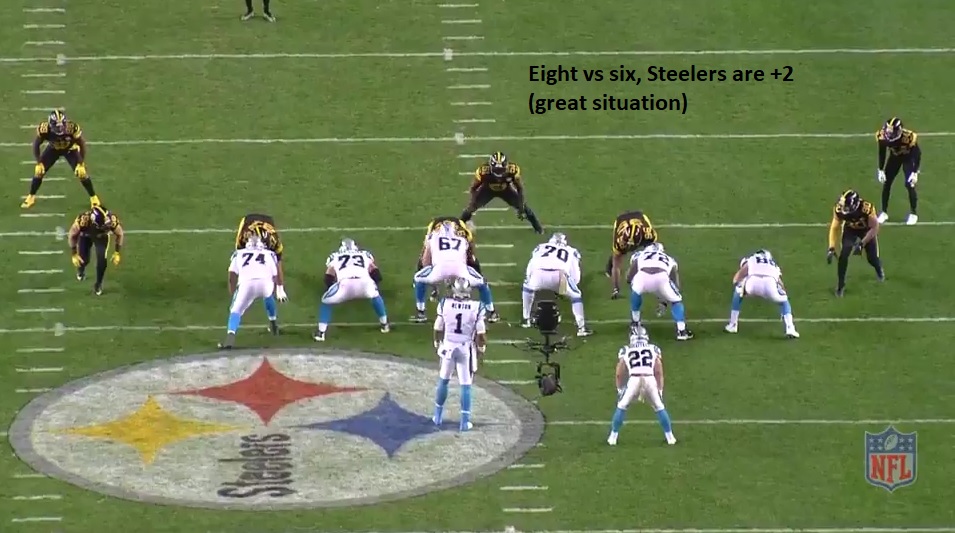 The first drive the Carolina Panthers had felt like a baaaaad omen. They marched down the field, the Pittsburgh Steelers’ defense providing zero answers, and before you could even down your first slice of pizza (or given the way the drive was going, chug your first beer), they led 7-0.

That success was created by the run game and Christian McCaffrey before setting up his receiving score. It was a simple formula. Carolina ran their read option to great success. What made it work so well? There’s a couple factors to explore.

Two of the four zone reads they ran on that drive netted gains of 12 and 21 yards while another moved the sticks on 4th and 1.

On the 12 yard gain, the Panthers came out in a 2×2 stacked look. That spreads the field horizontally and lightened the Steelers’ box. 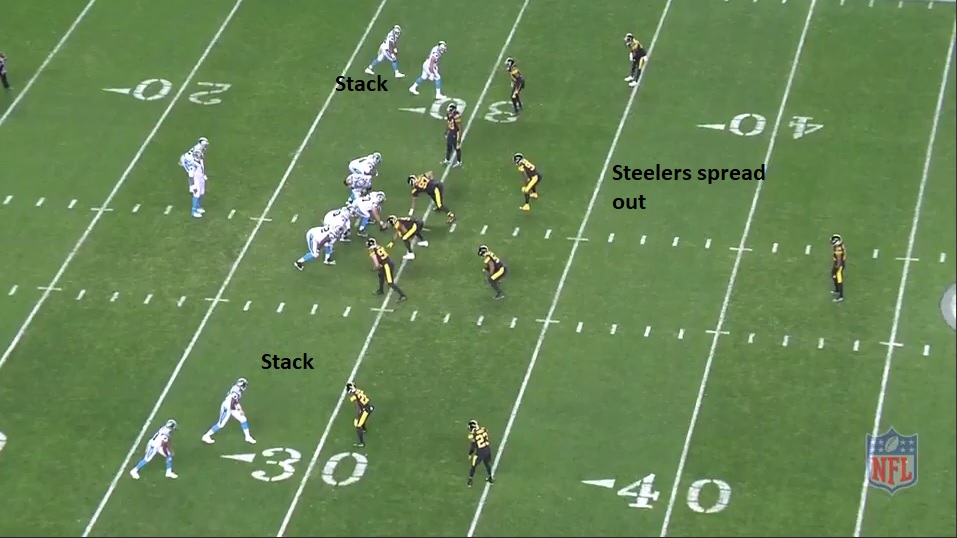 Here’s the thing about the run game. It’s not just about the number of players you have in the box. Eight man box, seven man box, sometimes that doesn’t matter. The box count is more important. How many players do you have in the box as the offenses does blockers? If you’re +1, you have one more defender than the offense can account for. If you’re -1, you’re short a guy. That’s going to decide how successful your run defense is, not just an aggregate number.

And for this run, the Steelers are +1. Six in the box against five blockers. 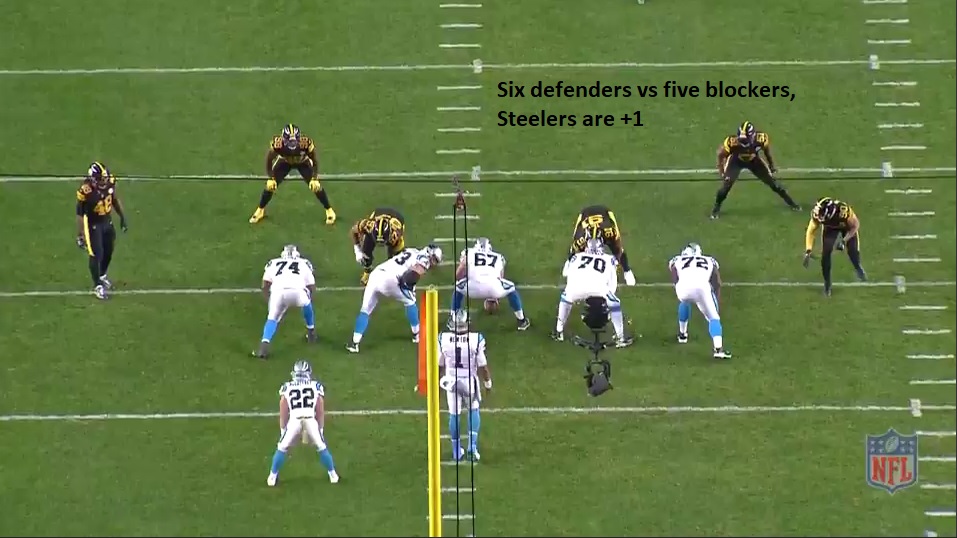 But the read option is the offense’s counter to even up those numbers. The playside edge rusher – in this case, Bud Dupree – is purposely left unblocked and the QB reads him. If he crashes down on the back, the QB keeps the ball. If the defender attacks the QB, he hands the ball off inside. One man to account for two possibilities. That’s a “lose lose.”

The left tackle and left guard wash down their responsibility, it doesn’t help the Steelers are blitzing an ILB and dropping T.J. Watt, and it creates a huge run lane for McCaffrey. With Dupree factored out, the Panthers are even, which is all an offense needs to win. They just have to block it. 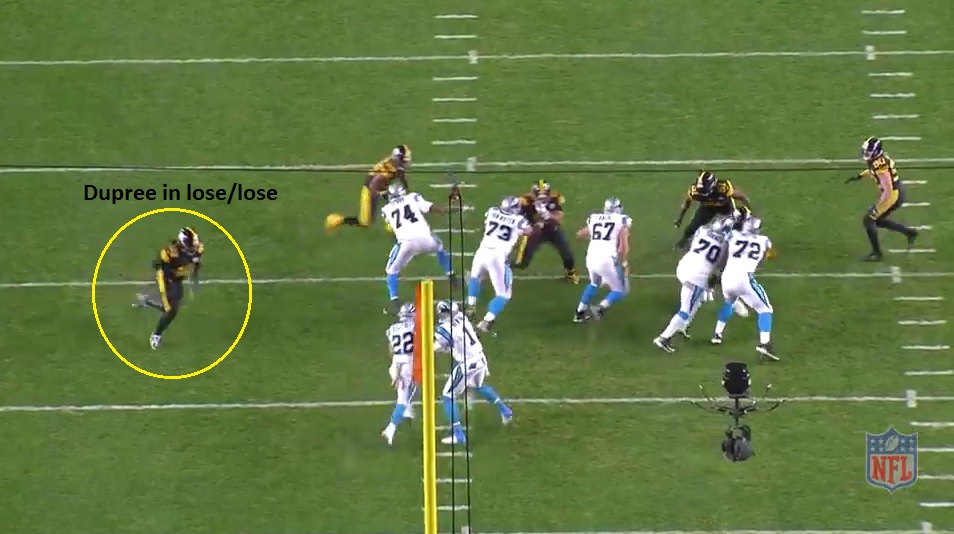 Similar situation on the 21 yard gain. Again, a 2×2 stack from Carolina. 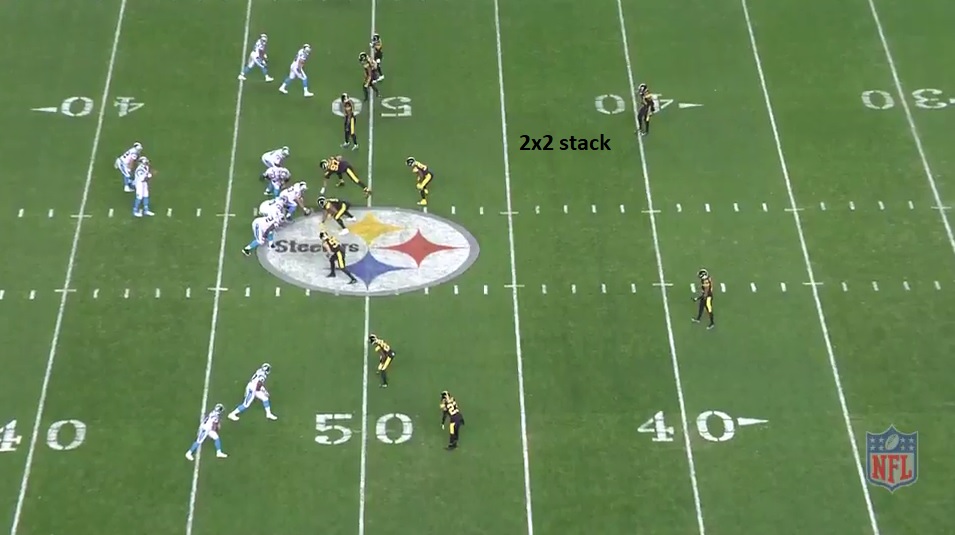 This time, the Steelers walk out ILB Jon Bostic to defend it. That leaves them with just five in the box, an even count, and a better situation for the Panthers. 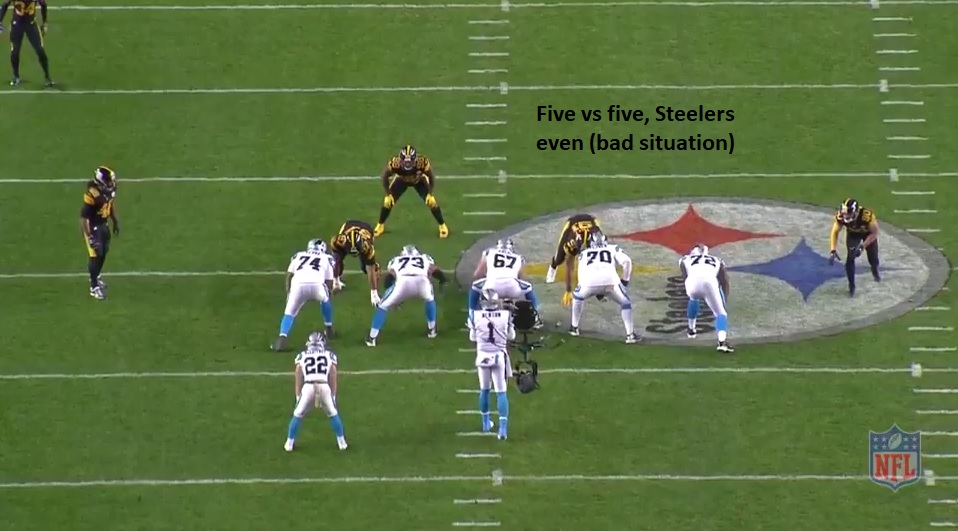 An even count is already a tough enough spot. Factor in the red option, where the Panthers take away one of those defenders, and now they’re +1. 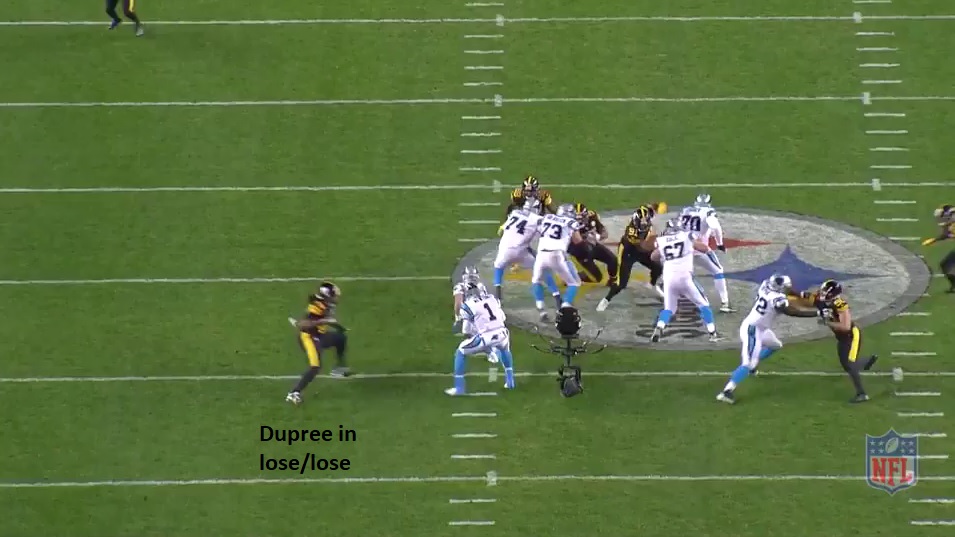 So the Panthers rolled that drive. Next time out, Keith Butler and the Steelers started to make the right adjustments. Carolina probably hurt themselves by bringing in some heavier personnel not spreading the field out. Here, they’re in 12 personnel with two tight ends.

But the Steelers get smart and roll SS Terrell Edmunds into the box, the eighth man to come in. With seven blockers, they’re +1 and to the playside, they have an extra defender. 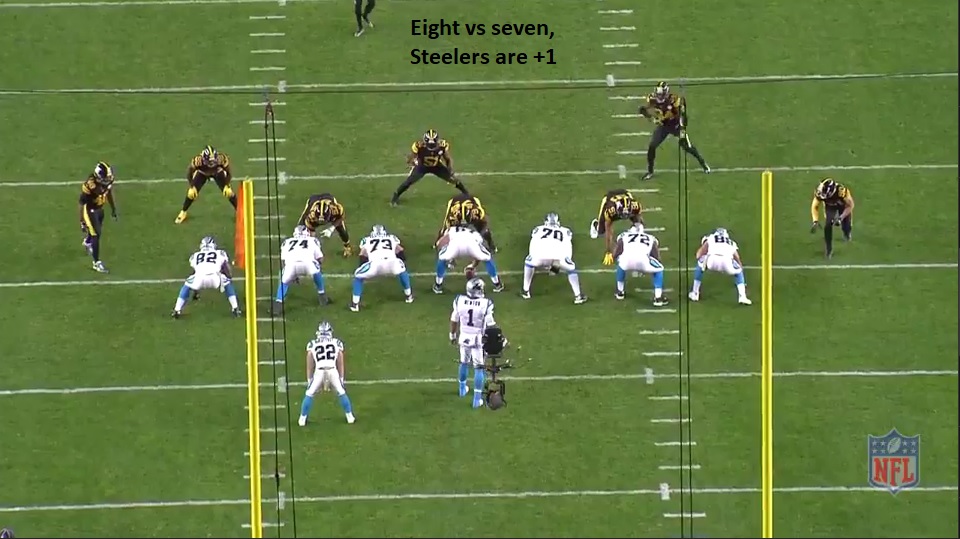 Now, they can account for the give (the back) and the keep (the quarterback). Dupree on the QB, like before, but now Vince Williams is free too. He makes the tackle and Javon Hargrave sheds center Ryan Kalil to help out. 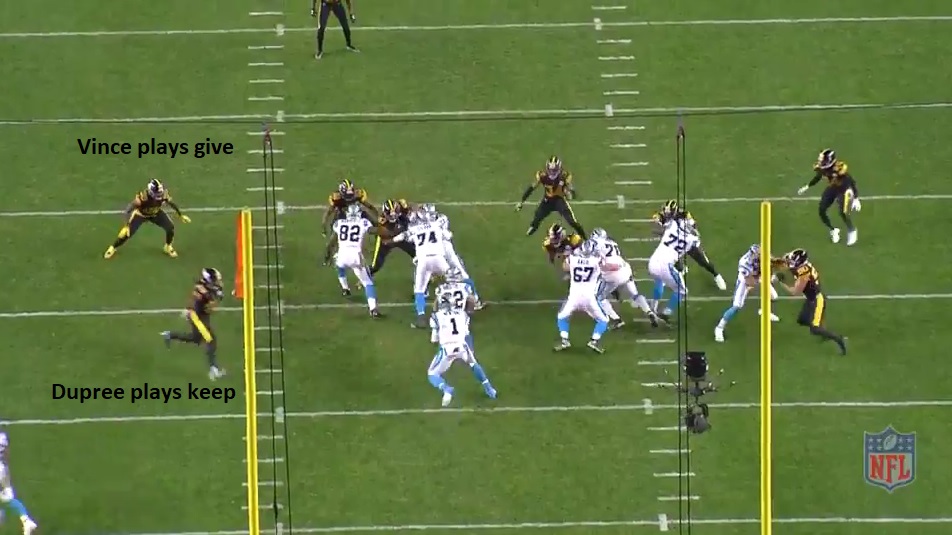 Even better here. Panthers have six blocking in 11 personnel but the Steelers roll an 8th man into the box. They’re now +2 and more than capable of defending the reading option.

Watt forces the give to the back and you have two unblocked Steelers to attack McCaffrey. Coty Sensabaugh forces the back inside to Vince Williams. 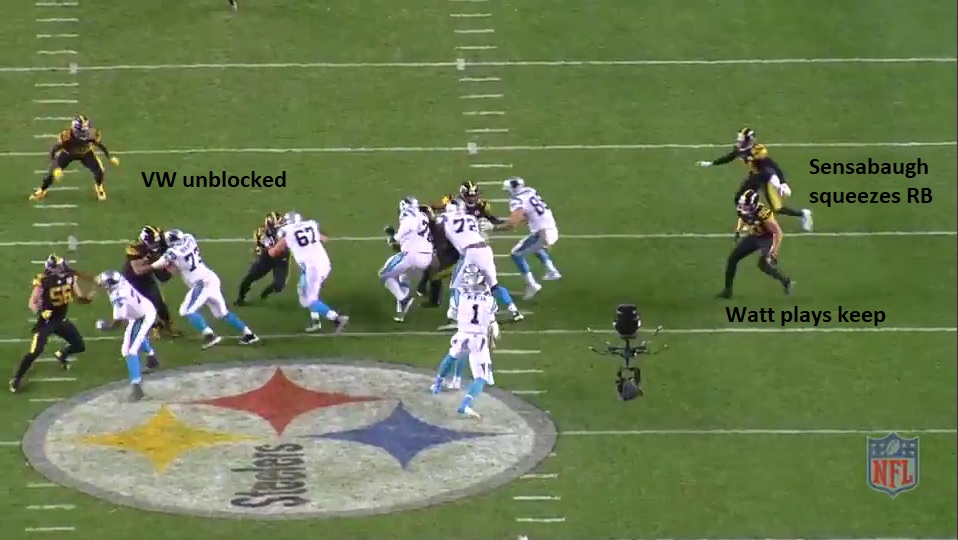 And again, guys get off blocks, Hargrave again shedding and making the stop after just a three yard gain on 2nd and 15.

One last look at it. Panthers have seven blocking and the Steelers again respond with an eight man front, plus Terrell Edmunds playing just ten yards deep. They’re +1 and in position to stop the run, though this one doesn’t look like a read, which makes being +1 even better. 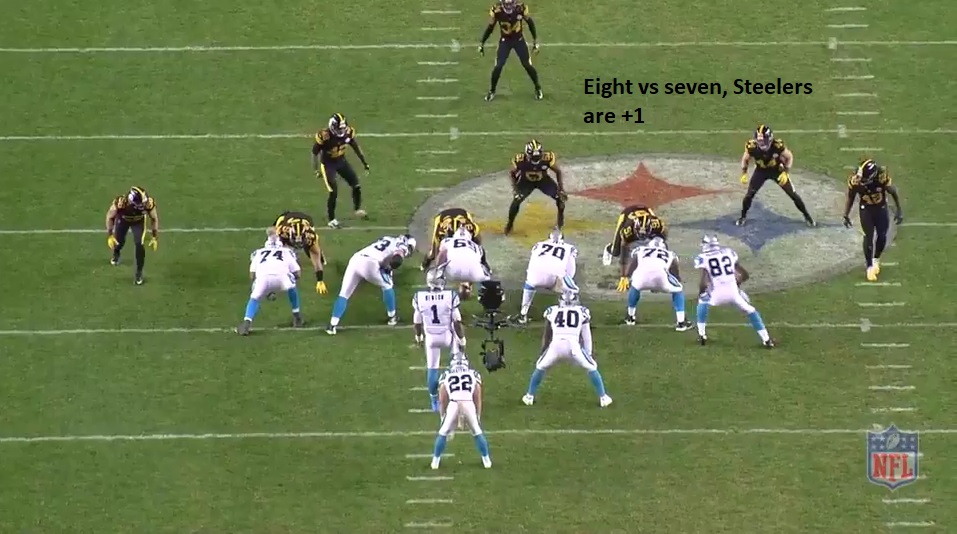 Tyler Matakevich is unblocked and helps make the tackle for a short gain. 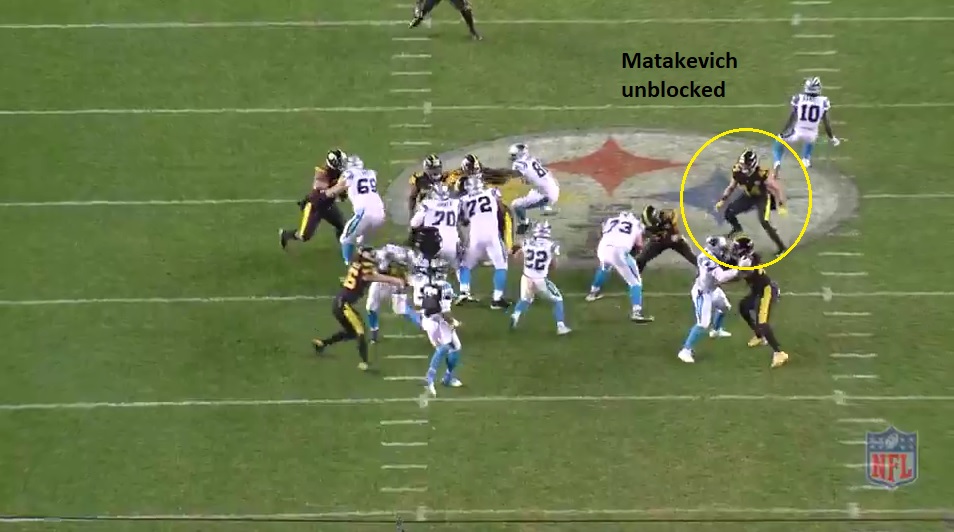 The Steelers knew what the key to this game was. Stop the run. They did that by playing more base defense than they will in any game this season. Even with the Panthers playing from behind throughout the night and using three receivers 72% of the time, Pittsburgh played their base 3-4 on 65% of their snaps.

Win the line of scrimmage, keep that box count high, and not let what the Panthers did on the first drive (where the Steelers played nickel or dime on five of eight snaps) happen for the rest of the game. Score aside, that’s why the run defense turned around.