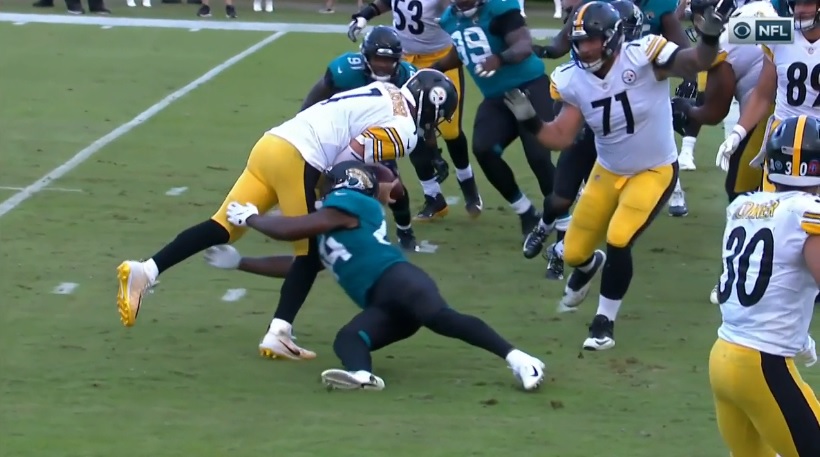 Remember when LeBron James said those now semi-infamous worlds after joining the Miami Heat? That’s sorta what Ben Roethlisberger was facing with 1st and goal with five seconds left, down three.

Where was “Ben Roethlisberger dives head first into the end zone” in the play progression?

Not one. Not two. Not three.

That playcall from Randy Fichtner is one of his staple short-yardage concepts. There’s several elements to that play, and trust me, Ben going all John Elway isn’t one of them. He admitted it himself after the game.

“I don’t know what option I am on that. But it’s way down the list. They took away the other ones and it’s kind of one of those things where the competitiveness, the end zone is right there.”

There’s really three options on this play. So let’s break it down.

The first read is to the receiver pre-snap and motioning across the field. Usually that’s Antonio Brown. He’ll zig zag behind the line before flaring out to the right flat. If you get man coverage, the cornerback following but trailing because he’s trying to catch up, you can hit it for an easy completion.

The second read is the most common outcome, at least this year. A shovel pass to the backside receiver in a tight split. He’ll work across the formation behind the pulling backside guard. With the defense flowing hard to the quarterback’s rollout, it’s usually open and if it is, will get you at least a couple yards. Enough to convert a two point conversion or in this case, from a yard out.

The third read is to hit the back in the right flat. He’ll work out behind the first read, the motioning receiver, and is a last-ditch option if the defense sniffs out the first flat and the shovel. I’m not sure if they’ve ever completed a pass that way, though. Part of it helps expand the linebackers wide, drawing their eyes, to open up the shovel.

If everything is taken away? Ehhhhh – you’re screwed. Just try to make something happen.

That’s what Ben did.

Here’s how the play is drawn up. 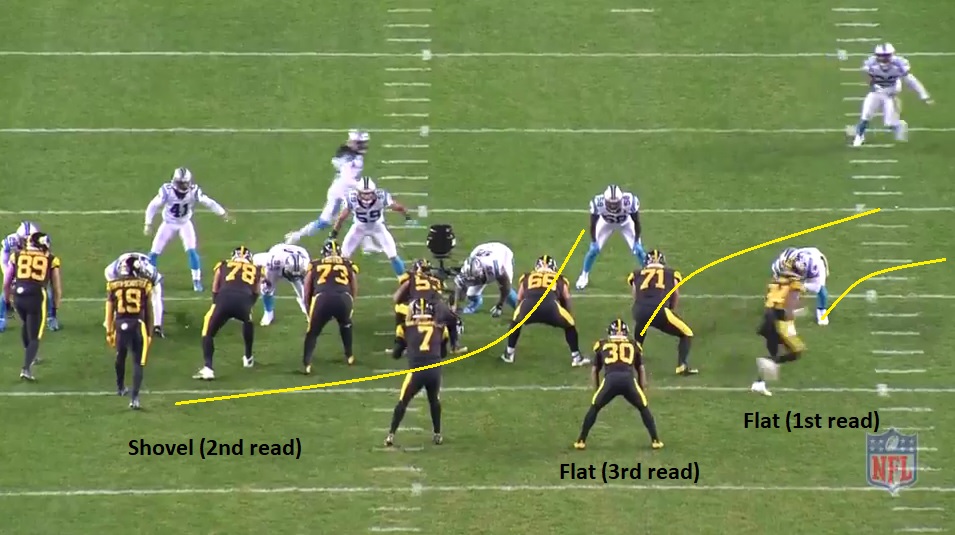 Pittsburgh ran it last week for a nine yard gain on 3rd and 2 against the Carolina Panthers. It was the shovel pass to JuJu Smith-Schuster that got the job done and the play I drew up above.

And here’s the same against the Kansas City Chiefs in Week Two. Again, this converted, though when Fichtner tried to run it later on near the goal line, it failed.

The shovel pass is not a new idea to the Steelers. The extra elements, the reads in the flat are pretty new, but here they are running it back in 2013 against the Baltimore Ravens. Tried and true concept.

But that also means it’s on tape. A lot. And the Jaguars saw it coming. #91 Yannick Ngakoue played the shovel really well, taking it away from Vance McDonald.

The Steelers didn’t want to give away what the playcall would be, and Brown’s pre-snap motion certainly would do so. Instead, he’s lined him up in his normal “X” spot. That was now taken away too.

And that third read, this time James Conner in the short flat, wasn’t much of an option either. Conner didn’t get his head around, like I said, he’s more of a decoy, and there only in case of emergency. Regardless, he was covered too. 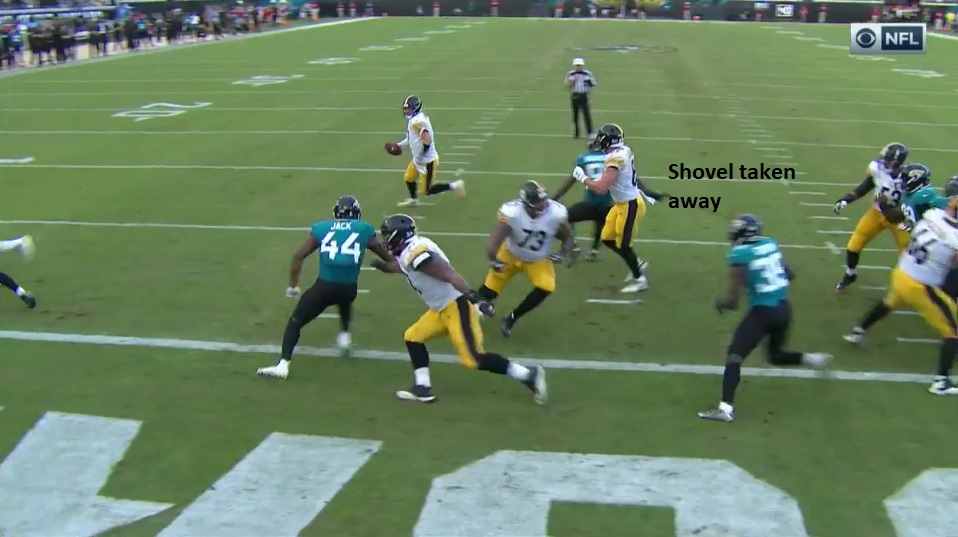 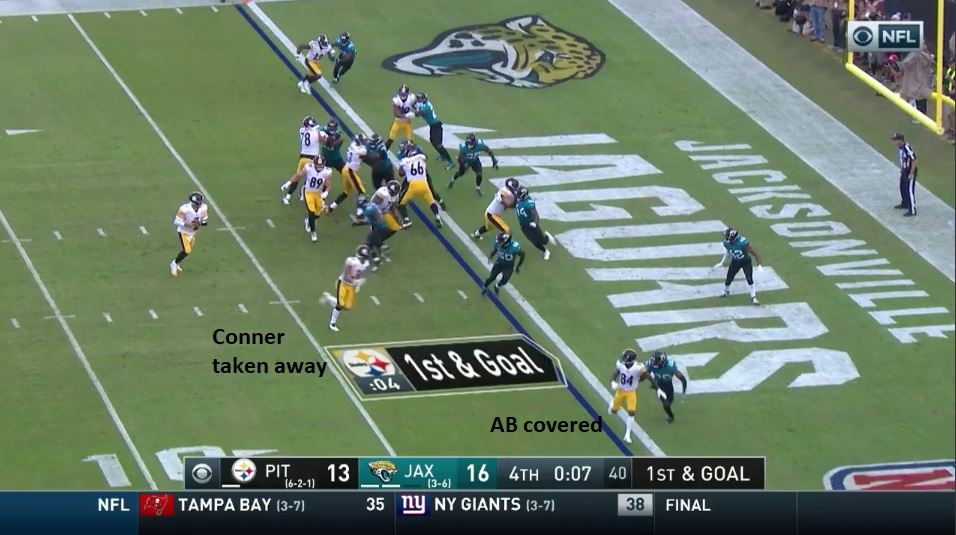 So Ben had three choices. And he had to make it in an instant.

1. Throw the ball away. Waste the play, and either go for it and win or lose the game, there probably wouldn’t be enough time to run two, or kick the field goal and head to overtime.

2. Scramble around. Hope something opens up. But if he does, it’s absolutely the final play of the game.

That’s what he chose.

With Ngakoue taking away the pitch, it opened up a crease, cutting to the inside of linebacker Myles Jack, flying in to attack Roethlisberger. He avoided enough of the tackle to keep momentum forward as right tackle Matt Feiler had to dance out of the way. Roethlisberger still fell into him but it was just enough to keep momentum falling forward and cross the goal line.

So for this play, Ben wasn’t the number one read. Or two. Or three.

But it went for six. And that’s the only number that matters.