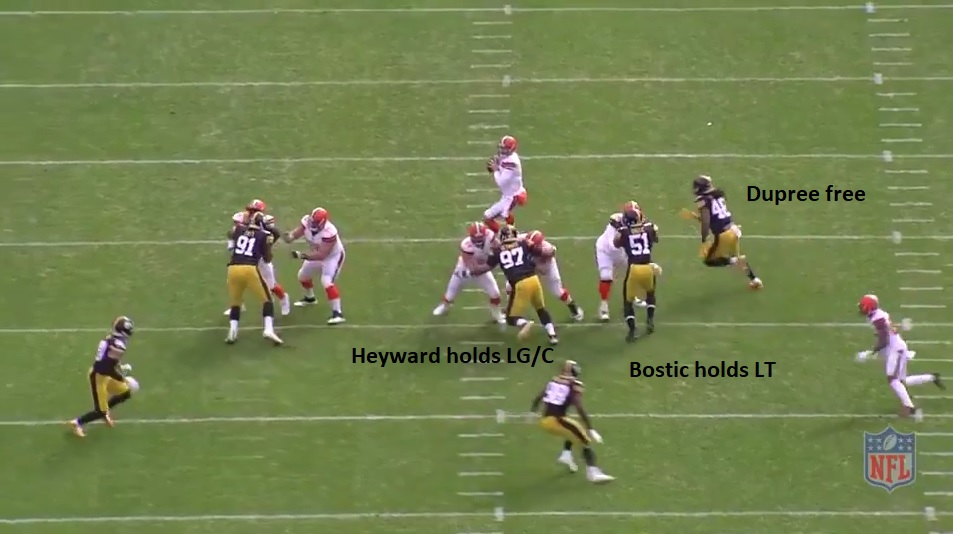 Final result aside, you could copy and paste the Pittsburgh Steelers’ Week One gameplan to Sunday afternoon. Eliminate six turnovers, only a pair Sunday, and they beat the Cleveland Browns by two scores.

Offensively, like we wrote yesterday, Randy Fichtner relied on his power run game to control time of possession and wear the Browns’ front seven down.

Keith Butler’s gameplan was nearly the same. A heavy dose of “safe pressure,” bringing four, sometimes five if in base, with an ILB hitting the B gap and the away side OLB dropping out. It confused the Browns’ weak offensive line all game long, creating easy pressures, sacks, and hurried throws. Just as it did in Week One.

According to our charting, when the Steelers sent at least one ILB on a blitz, the Browns went 3/12 for 14 yards, were sacked twice, pressured seven times, and went 0/3 on third down. For those specific plays, that is elite defense. So let’s take a look at a couple of those examples.

Second and six, early in the game. Four man pressure against empty, so you’re still dropping seven, but Jon Bostic blitzes the B gap between tackle and guard, picked up by LT Desmond Harrison. The Browns’ center is sliding right, meaning the LG has to pick up Cam Heyward and Harrison on Bostic. 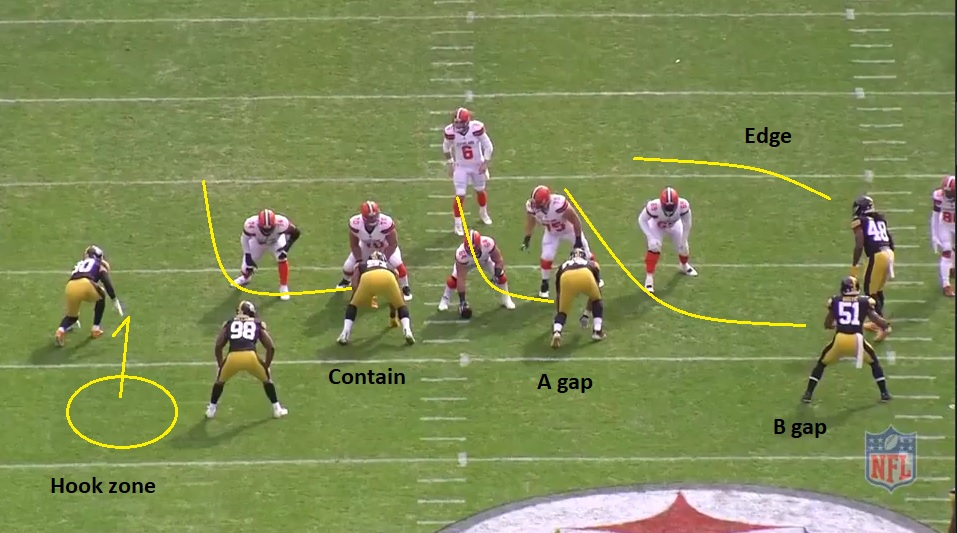 That leaves Dupree as the unblocked defender. He rushes in free, nailing Baker Mayfield, who gets rid of the ball just in time. But the throw is into tight coverage, nearly tipped by T.J. Watt, and falls incomplete. Pressure making the coverage look good here.

That’s how Watt picked up his sack. Same thing. Four man rush out of nickel, Bostic blitzes and away side OLB Anthony Chickillo dropping as the middle hook defender.

Like before, the tackle slides down to take the ILB and with Tyson Alualu sliding down a gap, draws the eyes of the center and right guard. Watt is rushing free and drops Mayfield for a four yard loss, setting up 2nd and long. 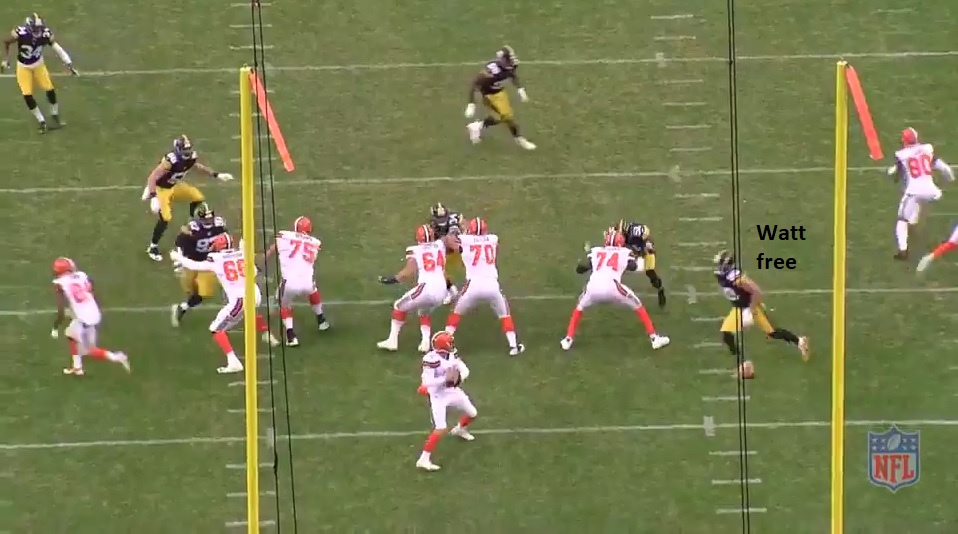 You get a slightly different look here but the same idea. Bostic hits the A gap this time with Alualu into the B gap. Daniel McCullers loops as backside contain to replace the dropping Chickillo (again, backside OLB drops). The LG and LT are now occupied and Dupree is in free. Forces the ball out hot though Duke Johnson manages to squeeze out a gain of eight, the longest gain of the day when the Steelers blitzed an ILB.

Even if the pressure didn’t get home, it still confused the rookie Mayfield, seeing the Steelers for the first time. Four man rush here, L.J. Fort blitzing with the Steelers in dime, and Chickillo dropping yet again. Mayfield doesn’t seem to see him and tries to throw to the slot receiver running a skinny post. Chickillo steps in front and should’ve had the interception and a long return.

Like I said back in Week One, the best thing Butler does well is scheme up his LB blitzes. That’s no surprise given his playing background, he was a LB and coached the position for ten years before being promoted to defensive coordinator. Some of the run blitzes didn’t work so well but in the passing game, Butler out-dueled the now fired Todd Haley.

While I’ve been awfully critical of Butler, he continues to impress in this regard. It’s allowing his OLBs, who have struggled with consistency, to maximize their pressure. And help out a secondary that is far from the best in the league.