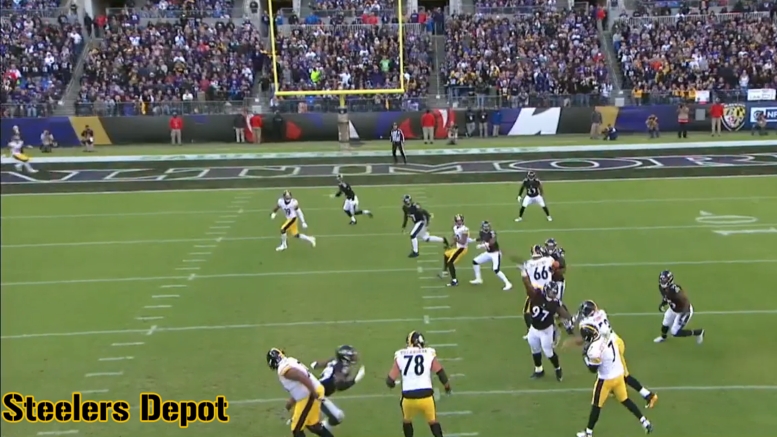 Unless your team is so good that you are able to move the football at least 10 yards by every other play, then one of the most important things for your unit to be able to do is move the chains on third down—and sometime fourth down as well.

The Pittsburgh Steelers have been doing that as well as anybody in recent weeks, so it’s no surprise they haven’t lost in a while. Here is just a sampling of their 11-for-17 day on third and fourth down on Sunday against the Baltimore Ravens

One of those conversions of course was a touchdown. The Steelers set up a flat route for James Conner by clearing out the right side of the defense with a pair of in-breaking routes from James Washington and JuJu Smith-Schuster. From there, it’s a simple race to the pylon.

Pressure on third and one prevented Ben Roethlisberger from getting a screen pass out to Ryan Switzer from out of the backfield on third and one in the second quarter, but they decided to go for it on fourth down from the Ravens’ 41. Getting Smith-Schuster on Jimmy Smith on the open side of the field out of the slot, they knew they had a match they liked, and it was a simple pitch and catch at that point.

On their next possession, they were looking at a third and two from their own 33. Switzer was the third receiver on the field, prior to the snap lined on the left but motioning right pre-snap, first stopping and then breaking hard to the sideline. A pick route from Smith-Schuster got Switzer open for a five-yard gain up the right sideline.

Facing third and seven early in the third quarter, the Steelers turned to a four-receiver set and got Antonio Brown inside, one on one against Marlon Humphrey, with Smith-Schuster inside of him. The veteran receiver cut underneath his teammate, Humphrey playing over the top, providing him with plenty of separation.

Five minutes into the final frame, the offense had to convert on third and eight inside the red zone. Putting three receivers to the left, Ben Roethlisberger did not have an immediate target, but was able to extend the play and find Smith-Schuster for nine yards, reading the play.

It was Smith-Schuster again coming up with the third-down catch at the two-minute warning on a play that made a huge difference, as it forced the Ravens to use their three timeouts over the course of the subsequent three plays. Here he was the inside slot man to the right, and with the Ravens down a couple cornerbacks at the time had linebacker/safety Anthony Levine covering him. Roethlisberger exploited that mismatch for another pitch-and-catch chian-mover.

On only one of these plays did it not go exactly as planned. And this was far from a complete catalogue of their conversions, which just goes to show you how well they are executing on possession downs right now.