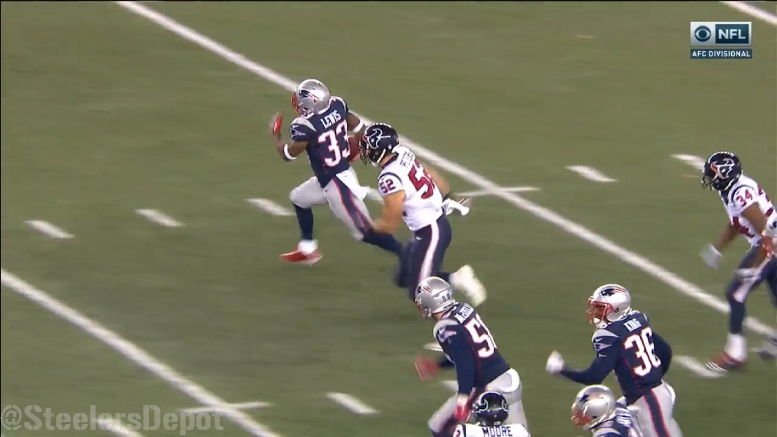 It wasn’t so long ago that the Tennessee Titans were deeply immersed in a Pittsburgh Steelers alumni culture, but with the changeover taken place this offseason, we have a wave of New England Patriots coming in, headed by former player and coach Mike Vrabel as head coach, as well as defensive coordinator Dean Pees, who coached Vrabel in New England.

On the roster, the Titans have brought in both of the Patriots’ former starting cornerbacks, Logan Ryan and Malcolm Butler, who helped hold the Patriots to 10 points. There are probably other connections, but guard Josh Kline also came over from New England. Perhaps the most notable, though, is running back Dion Lewis, who signed with the Titans this offseason.

Said the former Pitt back after yesterday’s game, “it’s a real sweet win, especially when you used to be there and they didn’t want you back. Definitely real sweet”.

Lewis spent the past three seasons with the Patriots in a variety of roles that often depended on his health. He was limited to seven games in each of his first two seasons there. In 2017, he played in all 16 games and rushed for just under 900 yards at five yards per rush with six touchdowns, adding over 200 receiving yards and another three touchdowns.

With the Titans this year, working in tandem with Derrick Henry, he has rushed for just under 400 yards so far and added another 270 receiving yards, with one touchdown each on the ground and in the air. He had just 57 rushing yards on 20 attempts and 11 receiving yards on two receptions with no scores against the Patriots yesterday.

One reporter asked Lewis after the game if the win was a personal thing for him over his former team, where he felt he found a home until they were unwilling to do much of anything to attempt to keep him in free agency. “Hell yeah it’s personal”, he said. “That’s what happens when you go cheap. You get your ass kicked”.

Of course, the Patriots still have a better record and are leading their division. And their replacement running backs have been doing perfectly fine without him. Rookie first-round pick Sony Michel has 453 rushing yards and four touchdowns on the ground, while James White leads the team in all receiving categories with 66 receptions for 562 yards and six touchdowns, plus another 230 rushing yards and four rushing touchdowns.

It’s harder to look at the Patriots’ economic strategy when you’re the one on the business end of their decisions, and if I were Lewis I would probably have a similar response about a juggernaut team who seemingly didn’t want me, only to help blow them out.