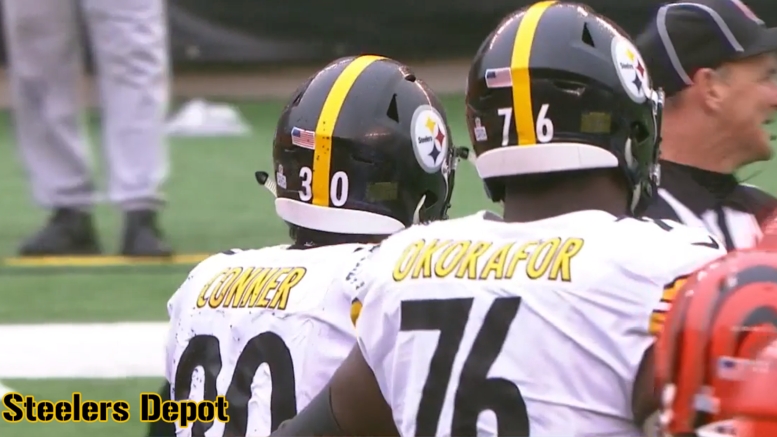 Hopefully it doesn’t happen. Especially against Von Miller and the Denver Broncos pass rush. But if Marcus Gilbert can’t play this week (which seems likely) and Matt Feiler is also unavailable (that seems unlikely), rookie Chukwuma Okorafor would make his first start at right tackle.

You know the rest. Standard is the standard. Next man up. Feiler did it. Countless other offensive linemen have done it on this team. And done it well. So it’s fair for Mike Tomlin to have confidence in his big uglies up front. He also cited the playing time Okorafor’s received as a tackle-eligible as a way to get prepared for starting action.

“I’ve been pleased with his growth,” Tomlin said Tuesday afternoon. “The good thing is, and that’s one of the reasons why we take the thoughtful approach that we do with young swing tackles, is that we play him at tight end some. And we’ve played him at tight end some. He gets to report as eligible, gets in-game experience. We’ve done it over the years. We’ve done it with Villanueva. We’ve done it with Mother Hubbard and others. It’s a way for a young developing tackle to get in-game experience and play some.”

According to the charting done by our Mr. Wonderful Matthew Marczi, Okorafor has entered at tight end 58 snaps prior to Jacksonville’s game. That process began from the word go, logging 17 snaps in Week One, still his season high. Predictably, he’s mostly had to work on his run blocking, the Steelers have thrown the ball just seven times in those situations. The run game has been a mixed bag, averaging just 3.5 YPC, but it’s often occurring in short-yardage or red zone play, where that average is naturally going to be on the low end.

Okorafor also logged a handful of snaps at the end of the blowout win over the Carolina Panthers, seeing his first action at right tackle with Feiler shuffling inside to guard. It wasn’t much but it’s experience, tape to review, and creates a little extra comfort.

“If he’s called upon, it won’t be the first time he’s played for us. So we’ll expect him to play varsity ball.”

Of course, this scenario is still unlikely. Tomlin noted Feiler’s pec injury didn’t limit him in the game and didn’t suggest he’s in danger of missing Sunday’s game.