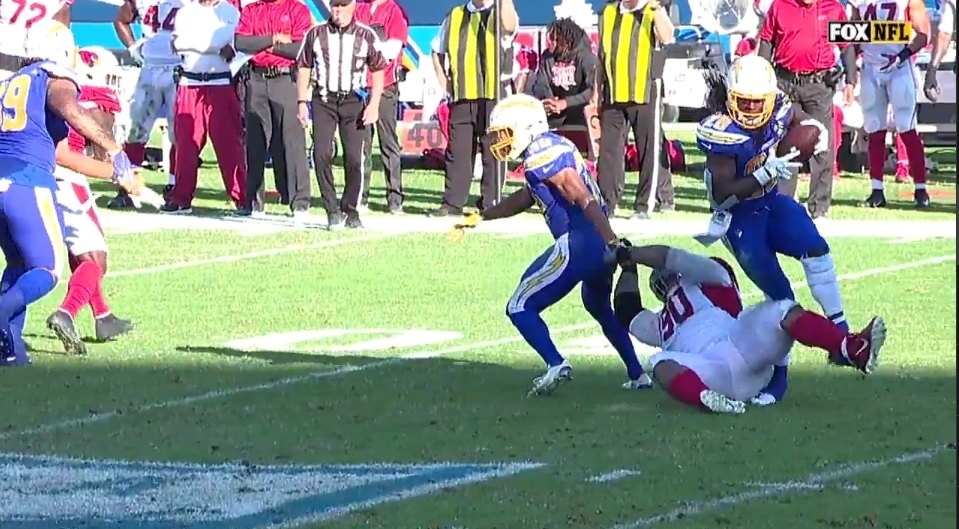 The Pittsburgh Steelers will be looking for a bounce-back win Sunday against the Los Angeles Chargers. The Chargers being without their starting running back will definitely improve their odds. Melvin Gordon suffered an MCL sprain in yesterday’s 45-10 win over the Arizona Cardinals, making it nearly certain he won’t play Sunday night against Pittsburgh.

Here’s a look at the injury, suffered on an attempted end around in the second half of the win.

OK this Melvin Gordon thing is borderline negligent by Chargers.

1) Gordon battling multiple injuries (including knee) is active (fine, whatever)
2) Gordon on the field in a 28-10 3rd Q blowout
3) Chargers line Gordon up at WR, run reverse when his knee gets blasted

Here’s an informative breakdown of the injury.

Gordon entered the game already dealing with hamstring and knee issues that limited him throughout the week. Despite those nagging injuries, he had enjoyed a stellar 2018 campaign, averaging 5.2 yards per rush with 13 total touchdowns. He carried the ball ten times for 61 yards and two scores before exiting yesterday. He hasn’t been ruled out for the game but that appears to be a mere formality at this point.

Replacing Gordon will be Austin Ekeler and Justin Jackson, two athletic runners who can do damage out of the backfield. Ekeler nearly has as many yards receiving (354) as he does rushing (409) while catching three touchdowns this season. Jackson saw the most work of the season after Gordon went down, carrying the ball seven times for 54 yards. A 7th round rookie from Northwestern, he caught 122 passes in college.

Obviously, not having Gordon is a hit to their run game, but the Steelers will still have their fair share of challenges to stop their backups. Pittsburgh have had issues stopping the run the past two weeks. Jacksonville played ball control for the first half two weeks ago while Philip Lindsay gashed them for nearly eight yards a pop in yesterday’s 24-17 loss.

The Chargers’ offense still runs through Philip Rivers, who effortlessly picked apart a respectable Cardinals defense in a 45-10 blowout win. At receiver, they’re led by the immensely talented Keenan Allen while Tyrell Williams and Mike Williams are big-bodied, vertical/red zone threats. Antonio Gates is still chugging along, two weeks removed from a big performance against the Denver Broncos.