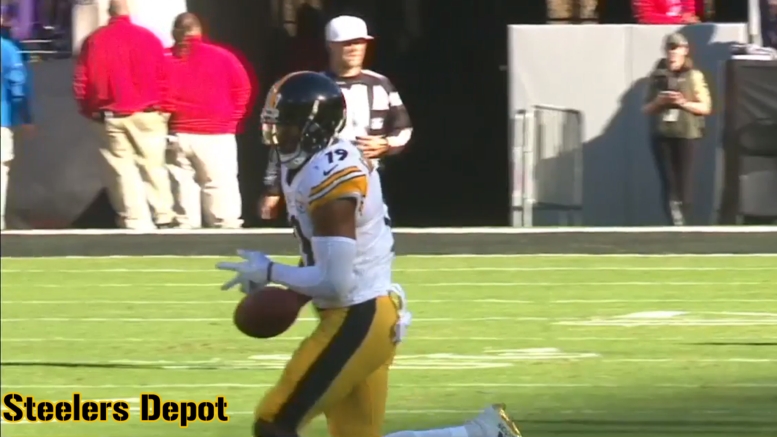 I would like nothing more than to have to search frantically for something to write about in a weekly column about dropped passes for the Pittsburgh Steelers this season, but unfortunately this wasn’t one of those weeks. They had three drops against the Baltimore Ravens, and another that is worth discussing as well.

We’ll start with the latter, since it comes first chronologically. About 10 minutes into the game, Ben Roethlisberger looked rookie wide receiver James Washington’s way on first and 10, only to see his pass bang off the second-round pick’s knee. Roethlisberger delivered the pass earlier than he was expecting and couldn’t adjust quick enough to haul in the pass.

Of course, the big, costly drop of the game was JuJu Smith-Schuster’s at the two-minute mark in the second quarter, it proving to be the difference between punting and at least attempting a field goal.

From just shy of midfield, Roethlisberger found him coming over the middle behind zone coverage inside the Ravens’ 40-yard line and plenty of room to run. He might have even scored on the play. But he turned his head before securing the pass, which plopped out of his hands.

The offense would have two more drops before the half was through, by which point everybody was already screaming for them to just take a knee. The first was from James Conner, who has been great as a receiving back. This target came under less than ideal circumstances, needing to get the ball over a defender at an arcing angle, but he has a clear enough shot on the ball here that I think it merits the label of a dropped pass.

Then there was Vance McDonald’s first drop of the season with 19 seconds in the half. Getting the ball out of an RPO, the big tight end should have picked up at least a dozen or so yards on the play, if not more, and left them with about 14 seconds on the block from around their own 40.