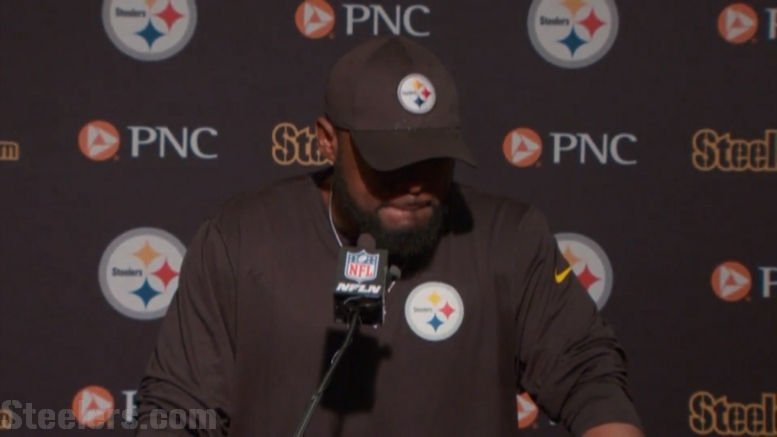 The Pittsburgh Steelers are a winning game, and are now riding a delicate two-game winning streak, victors in three of their last four games. Their lone defeat in that span came against the Baltimore Ravens, a 4-2 team that leads the league in sacks. They have played much better football over the past two weeks, their two most complete games of the year bar none.

That doesn’t mean that everything is right with the world in Pittsburgh, however. The sky isn’t falling, but the sun isn’t necessarily shining, either, and when Head Coach Mike Tomlin was given the opportunity to opine otherwise yesterday evening during his post-game press conference, he declined to take that angle.

When he was asked at the end of the press conference if he felt like they were a different team than the one that got off to a 1-2-1 start of the season, he denied it. “We’re the same team. With the same warts”, he said. “Trying to get better. But it’s more fun to do that with a W”.

The Steelers, after all, came pretty close to losing this one. They held a 20-14 lead late until the defense gave up a go-ahead touchdown with under 90 seconds to play. The offense stalled on the opening drive, went three and out a couple of times, and stalled twice in the red zone, while the defense was its usual inconsistent self.

“We made some plays. We missed some plays. That’s life”, Tomlin said at the top of his press conference. “It’s good to learn while you win, and hopefully we’re finding our rhythm, hopefully that is a signature of our game moving forward, that we can learn while we win. I’m appreciative of it today”.

That is exactly what they have been doing heading into their bye week. While they have secured victories of 41-17 and 28-21 over the course of the past two weeks, with good play coming in all three phases, the ‘warts’, as Tomlin called them, have still been very much evident.

Whether it’s your long snapper being called for holding twice in the same game, your wide receivers dropping passes or your tight end fumbling in the red zone, the defense allowing a touchdown drive late with a six-point lead, etc., etc., you remain a team with things to work on.

And the bye week comes at an opportune time with, as the head coach said, the team winning while they are learning. Hopefully they can use this time efficiently to teach some lessons and make appropriate changes to play cleaner, more efficient football entering the second half of the season.

Same warts, just different results. I’ll take it for now, but there’s still work to be done, and the Steelers are not running away from that fact.