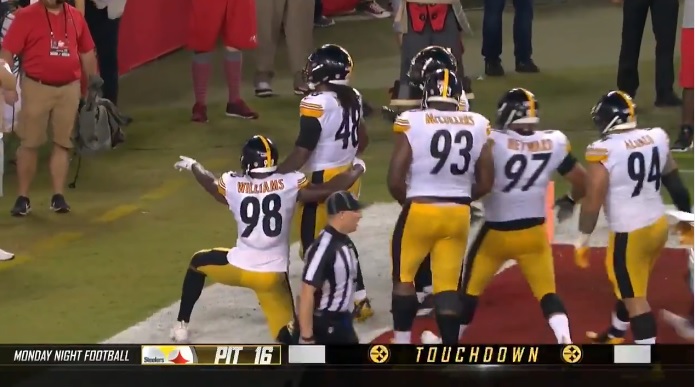 Mike Tomlin thinks the Pittsburgh Steelers’ defense is about to take off.

Speaking at his weekly Tuesday press conference, Tomlin said that although the final result wasn’t ideal, the defense is showing signs of turning things around.

“I really think we’re finding our rhythm defensively,” Tomlin said. “It didn’t show in the outcome of the game, obviously, and that’s what we work towards. But finding the mix of players. Overcoming some of the adversity the game of football presents. We were minus Morgan Burnett and Mike Hilton last week and I thought the guys got settled after the initial moments and found their rhythm.”

The defense allowed just four field goals in the second half of Sunday night’s loss to Baltimore, playing well in situational football, holding the Ravens to just one touchdown in five trips in the red zone.

Still, despite that optimism, it’s hard to buy into what Tomlin is selling. The defense allowed Baltimore to consistently convert on 3rd down, moving the sticks nearly 50% of the time, and nearly played a role in blowing the game wide open.

Late in the first quarter, Joe Flacco missed a wide open Michael Crabtree for a walk-in touchdown that would’ve made it 21-0. On their next drive, Flacco connected to John Brown for 71 yards and Baltimore marched down to the Steelers two yard line. To the defense’s credit, they forced a fumble, but more often than not, that drive is resulting in a touchdown or at the least, points on the board. In the second half, their offense went ball-control and while they weren’t flashy, they moved it at will, connected on their field goals, and played the field position battle on way to the victory. All while the defense struggled to simply get the right personnel on the field.

Tomlin wasn’t asked and didn’t clarify the position this week but Artie Burns and Coty Sensabaugh continued to rotate snaps, each getting two series. Both seemed to play reasonably well compared to past performances. It’s unknown if that rotation will continue for another week.

While getting Hilton and Burnett back will help, the team isn’t out of the injury woods yet. Vince Williams status for Sunday against Atlanta is up in the air after suffering a hamstring injury in the second half of the Ravens’ game. The Falcons who, by the way, rank 6th in the NFL averaging 29 points per game and just put up 36 in a loss to Cincinnati last week.

For the future of the team’s sake, let’s hope Tomlin is right. The defense will certainly need to be hitting its stride to slow Julio Jones and company down.