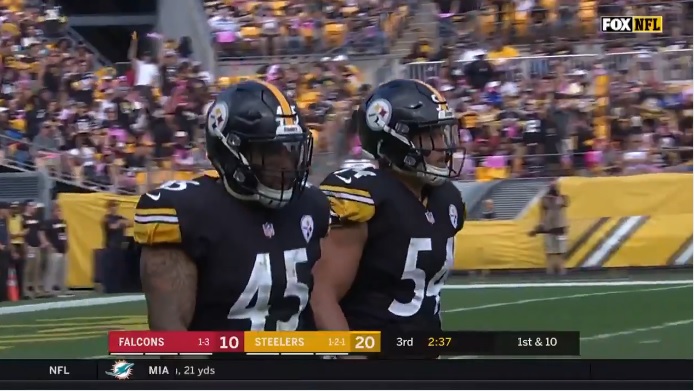 The Pittsburgh Steelers are back on track.

Coming into the Week 5 matchup at home against the Atlanta Falcons, the Steelers had something to prove in all facets of the game taking on a quality opponent at home. Consider the points proven.

Pittsburgh came out early and finally established the ground game once again, providing the offense with much-needed balance while working through some ugly play from Ben Roethlisberger before he turned it on late.

Defensively, all the talk coming in was about Atlanta’s high-powered offense, and rightfully so. Credit to Pittsburgh’s much-maligned defense though, as the Steelers turned up the heat on Matt Ryan and made him very uncomfortable while shutting down the Falcons’ run game.

Special teams – aside from Chris Boswell’s early missed extra point –was phenomenal. I can’t say this lightly:  Sunday’s 41-17 win over the Falcons was a full team effort.

Let’s take a look at some grades.

The first half Sunday seemed to be a carryover from last Sunday’s second half performance from Ben Roethlisberger, in which he struggled to connect with receivers consistently.

Roethlisberger left a number of plays on the field in the first half, but did have a great throw to JuJu Smith-Schuster down the seam for a touchdown to put the Steelers on top 13-0 in the first quarter.

Late in the first half Roethlisberger had a disastrous interception thrown in the end zone, trying to force a jump ball in the middle of the field to Antonio Brown that the Falcons picked off, sending the two teams into the half with the Steelers holding a 3-point lead at 13-10.

But in the second half Roethlisberger found his groove, connecting with Antonio Brown twice for scores, including a beautiful 47-yard touchdown down the left sideline that the veteran QB dropped in the bucket for his best deep ball pass of the season, bar none.

If Roethlisberger can avoid the head-scratching decisions to force throws, take what the defense gives him consistently, and connect on a deep ball or two with regularity, this offense will be hard to stop from the get-go.

James Conner was never the problem with the Steelers’ run game early in the season. I’ll say that until I’m blue in the face.

Conner’s performance Sunday at home was right up there with his Week 1 performance, fumble and all. Thankfully that fumble didn’t come back to haunt the Steelers.

As a receiver, Conner has really come into his own as a run-after-catch threat. He’s a physical runner that would rather run through a defender than make him miss in space. On Sunday, it looked at times as if defenders wanted no part of Conner.

He’s a fine answer for Le’Veon Bell until Bell comes back. Sure, he’s not the top running back in football like Bell is, but Conner is pretty darn good in his own right.

Behind Conner, Stevan Ridley got some working, running the ball 5 times for just 8 yards, but he was a nice change of pace back for the Steelers on the day, giving Conner a breather consistently, which kept the second-year back fresh down the stretch.

Brown came alive in the second half, as Roethlisberger was able to connect with him twice for touchdowns. Make no mistake though:  Brown has been open consistently throughout the season; it’s on Roethlisberger to get it figured out.

Fortunately for the Steelers, that happened in the second half. Surprisingly, the Falcons didn’t double team Brown much at all, allowing him to run free on routes. If Roethlisberger can get dialed in, that Wi-Fi connection will be strong once again.

Smith-Schuster didn’t have as explosive of a day as fans have come to expect early in the season, but he made a highlight-reel touchdown catch up the seam in the first quarter and proceeded to give birth to a football. What a day.

Ryan Switzer was the only other Steelers receiver to catch a pass on the day, but it was a day in which the Steelers didn’t need to rely on the passing game.

The tight ends were rather quiet Sunday, but they came through in a big way aside from catching the football.

Jesse James drew a key pass interference penalty down the middle of the field in the first quarter, setting up a Steelers touchdown, while Vance McDonald laid a huge block on an Atlanta defender to spring Conner on two of his long catch-and-runs.

Xavier Grimble got into the mix as a receiver, catching the ball over the middle to pick up a key first down, and he served as a solid blocking tight end throughout the game when called upon.

This group combined for just four catches for 35 yards, but as I said earlier, they made their presence felt in other ways that helped the Steelers roll to the win.

Any time you rush for 4.6 yards per carry and allow just four quarterback hits all game long, you’ve had a great day as an offensive line unit.

Alejandro Villanueva and Marcus Gilbert helped negate Vic Beasley and Takk McKinley as pass rushers on Sunday. That was big for the Steelers offensive line, which has struggled at times this season to protect Roethlisberger.

One week after having a poor game overall as a unit, the Steelers’ defensive line bounced back in a big way on Sunday, led by Cam Heyward.

The All-Pro defensive end came through with 1.5 sacks and 2 quarterback hits in the win, helping win the line of scrimmage against the run as well. Stephon Tuitt was mostly quiet, but he played a big role in slowing down the run game throughout the day Sunday afternoon.

Javon Hargrave got back to his penetrating self, blowing up a couple of Atlanta runs, helping the Steelers defense get off the field. Dan McCullers also played really well against the run, standing up Alex Mack at the line of scrimmage couple of times, clogging up the middle of the Falcons’ line.

TJ Watt had a whale of a game Sunday afternoon against the Falcons, leading the Steelers in tackles with six, and sacks with three. One of Watt’s sacks was a free run at Ryan in the pocket, but Watt was darn good all game long.

He beat Ryan Schraeder a couple of times off the edge to get to Ryan, and he was stout against the run, getting off blocks quickly to get his hands on Atlanta running backs on the perimeter.

Bud Dupree had a decent game as well, but fans will only remember the two illegal use of hands to the face penalties that extended Atlanta’s drives on two different occasions.

Inside, Jon Bostic continues to be a solid addition to this defense. The veteran recorded five tackles and half a sack on the day, and really clogged up the middle of the defense against the run. His roughing the passer penalty was a joke and shouldn’t be used against him. Same for Watt’s on Sunday as well. Both were as soft as they come.

Next to Bostic, Tyler Matakevich and LJ Fort were solid, with Fort really standing out, making plays left and right when on the field. Fort recorded a sack on Ryan, and recovered a Ryan fumble in the end zone for the game’s final score, putting the game well out of reach.

Matakevich struggled in coverage, drawing the assignment of carrying Calvin Ridley up the seam, but overall he played well coming downhill, and didn’t have anything really stand out in a negative light.

Anthony Chickillo deserves some love too. He was quietly a massive problem of Atlanta tackles on Sunday, setting the edge against the run and getting a couple of pressures in limited action.

What a bounce back game for Terrell Edmunds.

The rookie was isolated at times in the slot and in man coverage over the middle, but he was borderline outstanding all game long. Edmunds ran well in man coverage, tackled well in space, and really looked like the chess piece the Steelers hoped he was when they drafted him.

Joe Haden had a strong game on Sunday as well, helping hold Julio Jones without a catch until the fourth quarter. Yes, he had some help from Sean Davis and Edmunds over the top at times, but he shadowed Jones throughout the day and really helped take away one side of the field from the Falcons.

Mike Hilton was his usual disruptive self, coming off the edge with well-timed blitzes to force the ball out quickly, and he was strong in space as a tackler. He might be Pittsburgh’s best secondary player, ahead of even Haden. He just changes the collective outlook of this defense when healthy.

Artie Burns had a decent game, but he needs to develop some ball skills. He had a ready-made interception waiting for him on an overthrow by Ryan down the middle of the field. Burns straight dropped it.

Sean Davis was burned on Mohamed Sanu’s 43-yard catch-and-run on an RPO from Ryan on a slant, but overall he came downhill with force against the run, and really seemed to bring a physical presence to the middle of the field, much like he did in Week 1 against Cleveland.

I was also really pleased with Cam Sutton on Sunday as well. When he’s allowed to play man coverage and turn and run with receivers, he appears very comfortable. We saw that on Sunday.

Overall, this unit held Jones and Ridley – two of the NFL’s most productive receivers’ coming into Week 5 – to nine catches for 100 yards and no touchdowns. That’s one heck of a job by a much-maligned unit.

Aside from the early miss on an extra point, Chris Boswell settled in and nailed the next five that he attempted on the day. It looked like he may have slipped on the first one, but he got it figured out from there. There shouldn’t be any concerns moving forward…for now.

Punter Jordan Berry was terrific against the Falcons, dropping two of his three punts inside Atlanta’s 20 yard line, including one at the 1-yard line that pinned the Falcons back deep late in the game.

I’ve been hard on Berry this season, but he was spectacular on Sunday. Maybe the Steelers need to make him fear for his job more often.

Danny Smith sure does know how to draw them up, doesn’t he? Coming into Sunday’s game the Steelers had gotten so close so often to blocking a punt due to scheme. Finally, the Steelers did that on Sunday as Roosevelt Nix got his hand on a punt in the fourth quarter, helping the Steelers pull away for good.