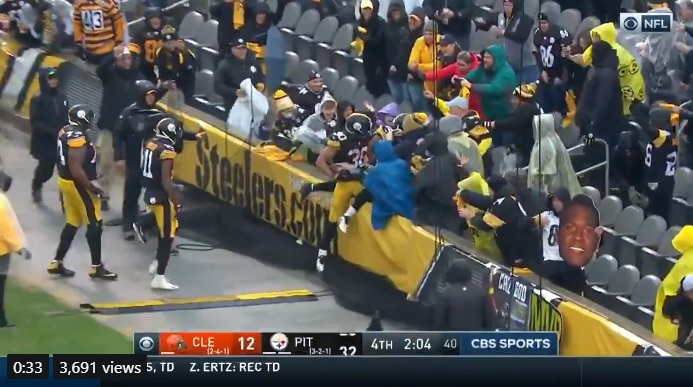 A game that should’ve, could’ve, been won easier. But a win nonetheless. Here are some winners (and losers) from the Pittsburgh Steelers 33-18 win over the Cleveland Browns.

James Conner: It’s becoming routine for Conner to show up on this list. He feels like one of those guys who gets better as the game goes on, even if that’s cliche to say. Conner keeps showing his power to run through defenders and make quick work of fruitless arm tackles.

Former Steelers’ RB Josh Harris noted on Twitter that when defenders begin to go low on you, that means they’ve studied your tape and respect your power.

Connor has gained the respect of opponent DBs. When you see them just diving at a RBs ankles, that means they felt what they have been watching on film all week, and it’s real pic.twitter.com/fZOMUPQFta

He’s still proving to be a capable asset out of the backfield too in the checkdown and screen game. And looks like a starter for years to come.

Offensive Line: Gotta give credit to the men up front. The Steelers’ power dart game, pulling the backside guard or tackle, has been their most effective run scheme all year long. And it was today too. Ben Roethlisberger was sacked just once, early on with the offense in reverse, and protected him the rest of the game. Feiler was quiet, which means he played well.

Jordan Berry: Anytime Berry pins the opposition deep, good things happen. That’s not be my hyperbolic. All four of his punts that forced the opposing offense inside their own five have resulted in splash. Today, a safety from Bud Dupree. He’s really turned his season around.

Now, if only we can tell this team how to field a safety punt (we’ll get to that).

Butler’s Blitzes: One thing Keith Butler has always done well is dial up LB pressures with only a four man rush. The Browns’ o-line couldn’t handle who was coming or dropping, Butler continually sending an ILB and dropping an edge rusher. That left the ILB either one-on-one with the back or the OLB free, the latter more common, and it got consistent pressure throughout. Like to see this defense finish a bit better, there were contain breakdowns that prevented that, but Butler put his guys in position to win.

Mike Hilton/Joe Haden: Hilton and Haden. The two dudes in this secondary with proven, legit ball skills. On display again today. Hilton had a pass breakup, played tight man coverage, and his run defense makes you feel like you’re not losing much when you go nickel. Crucial 3rd and 1 stop early in the game.

Bud Dupree/T.J. Watt: Like I said, want these guys to finish more. But they were in the backfield throughout. Dupree with a safety, Watt with a sack. Gotta tip your hat to them, even if it was far from perfect.

Antonio Brown: It may not have been the most spectacular day, by Brown’s standards at least, but anytime you catch two touchdowns, you’re getting on this list. That first one helped jumpstart an offense that felt dead in the water.

Danny Smith/Special Teams: Yeah…this is bad. I’ve lost count at how many sarcastic “but he can scheme punt block!” tweets I’ve gotten. I deserve it.

We can debate who the blame is on here, players, coaches, whatever. It’s both and it’s unacceptable. These problems have happened too many times already. Can’t occur for a team who wants to win a Super Bowl. Coming off a bye week, where you’d like to think there’s more time to plan and practice some of this super situational football, like a safety return, makes it all the worse.

Penalties: Still too many of them. Steelers came into the game tied for the league lead in penalties, with one fewer game than the teams they were equal to, and end today with eight of them. I guess it’s progress compared to Week One but far from good enough. Need to play cleaner, pre and post snap.

Stevan Ridley: Ridley got put into Mike Tomlin’s doghouse after a second half fumble that could’ve let the Browns back into the game. Jaylen Samuels saw the first carries of his NFL career. Not a good note to go out on if Le’Veon Bell does return before the Ravens’ game.