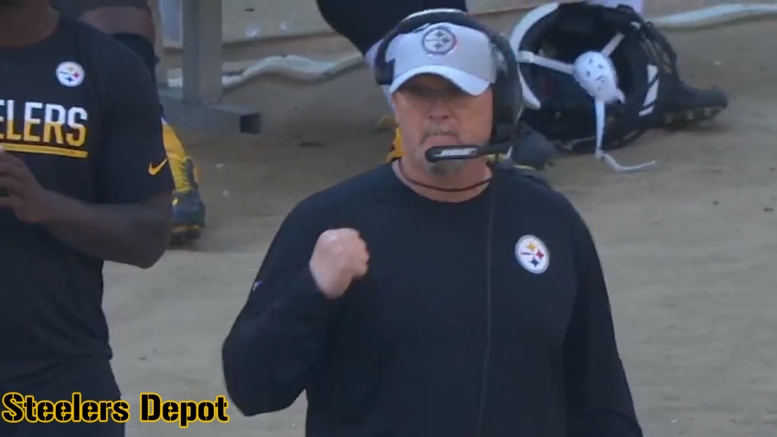 The second half has not been kind at all to the Pittsburgh Steelers this season. Or at least it hadn’t been, until today. the team entered the third quarter nursing a 13-10 lead that they should have been able to expand if not for a red-zone interception, but the final score shows that the game ended in a rout.

The Atlanta Falcons got the ball to start the third quarter, but the defense was able to keep them off the board, forcing them to punt. The offense responded with a 12-play, 90-yard touchdown drive that sucked up just over seven minutes of clock time, ending in a nine-yard reception from Ben Roethlisberger to Antonio Brown.

The Falcons went three and out in response to that score, and then fullback Roosevelt Nix got his hands on the Matt Bosher punt that ensued. The offense got the chance to take over again at the Falcons’ 18-yard line and they wasted little time, scoring in just 58 seconds on a three-play drive that finished with a two-yard James Conner touchdown run behind Nix leading the way.

Atlanta finally came back to put up a touchdown after falling behind 27-10 to make it a 10-point game, but that is as close as they would ever get. The offense and the defense would both put up one more touchdown, Roethlisberger again hooking up with Brown for a 47-yard strike and then a sack fumble by T.J. Watt recovered by L.J. Fort in the end zone.

The Falcons had a total of six drives in the second half, and the Steelers got as many points out of the mas they did. They punted twice, but successfully only once. They did score one touchdown, but another drive ended in a defensive touchdown, and the other two resulted in turnovers on downs following fourth-down incomplete passes or catches short of the sticks.

A week later against the Kansas City Chiefs, they entered the second half in a 21-21 game but were constantly behind the visiting team. They got two offensive touchdowns and a safety, but Kansas City put three touchdowns on the board.

They went into Tampa and won, but they had a 30-10 halftime lead and the game ended 30-27. Last week against the Baltimore Ravens, the game was again tied at halftime 14-14, only to see the Ravens add four second-half field goals while they were blanked.