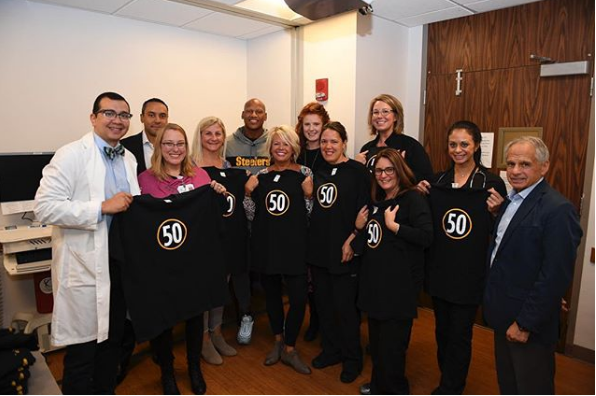 It’s certainly eerie for the Pittsburgh Steelers to return to Cincinnati, the first time they’ve been there since Ryan Shazier’s injury that left him paralyzed. For some Steelers, they’ve spoken of feelings of anger and at in the moment, revenge.

For Shazier? He just feels grateful.

Late Saturday night, he uploaded this photo to his Instagram account, returning to University of Cincinnati Medical Center? to thank the doctors, nurses, and teams who first took care of him following his season-ending tackle.

It’s been a long journey, but this is still a ways to go. But it all started here in Cincinnati. Today was an amazing day I was so thankful to be able to tell everyone thank you. #Shalieve

His caption reads: “it’s been a long journey, but this is still a ways to go. But it all started here in Cincinnati. Today was an amazing day I was so thankful to be able to tell everyone thank you.”

The account replied to him a short time later.

We're so grateful that you came by today, Ryan! It is our pleasure and privilege to serve all of our patients – and nothing makes us happier than to see your success! #Shalieve

Shazier spent his first few days there before being transferred to UPMC where he underwent spinal stabilization surgery before beginning his rehab to regain movement again.

His progress since then has been nothing short of remarkable. He’s been able to walk without the assistance of a cane for months now, debuting that ability during the Friday Night Lights practice back in August. Even if he never plays a down of football again, something I don’t think anyone should rule out (Shazier sure isn’t), it seems like he will be able to live a normal, happy personal life, which is the most important thing.

The support he received was critical. From the doctors who treated him and put him on the right road to recovery, a team that rallied around him, owners who sent their private plane for Shazier’s parents, a fanbase and city who supported him every moment.

As far as football goes, Shazier has served as a mentor, coach, and scout during the offseason and into the regular season. The AP’s Will Graves has a fantastic article detailing the impact Shazier still makes in that locker room, even if it isn’t directly on the field. One definitely worth checking out.