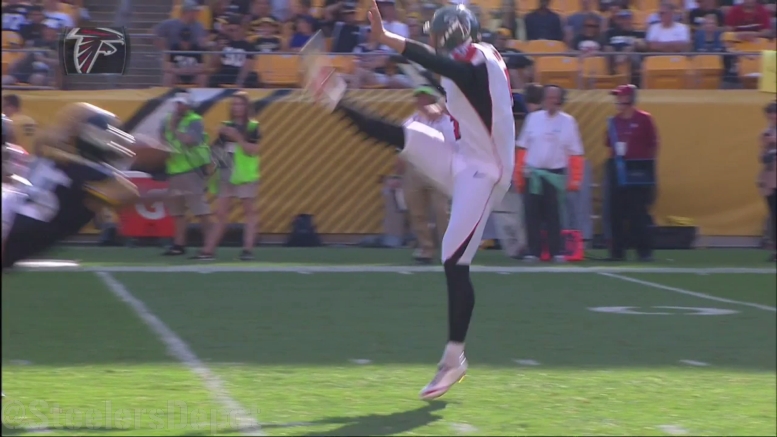 When it comes to playing against Roosevelt Nix on the punt return team, there is only one golden rule: you can’t stop him, you can only hope to contain him. The fourth-year Pittsburgh Steelers fullback always seems to be right on the verge of blocking a punt—and he’s had a few in his career already, including the preseason—but he got himself one today that helped the team put the Atlanta Falcons away for their second victory of the year.

The Steelers had a 13-10 halftime lead after quarterback Ben Roethlisberger through an interception in the red zone with just second remaining. While they were able to come back with the first points—another touchdown—in the second half, it was still just 20-10 when the Falcons punted late in the third quarter.

On fourth and nine from their own 22, Matt Bosher had another punt blocked, the second for him this season and the eighth of his career, going back to 2011. He had gone two seasons without having a punt blocked before having two blocked in the first five games of the 2018 season.

It’s also not the first time that the Steelers were responsible for one of his blocks, also getting him in the preseason last year. Oh, did I mention that was Nix as well?

The ability to block punts was one of the major reasons that he ever made a roster in the first place. Brought in as a linebacker in 2015 as a first-year undrafted free agent, he came in and blocked a punt in the preseason.

This punt block set the Steelers up inside the Falcons’ 20-yard line, an ultimately led to James Conner’s second rushing touchdown of the game, his fifth on the year with 185 yards from scrimmage on the day. And, fittingly, it was scored running behind Nix as his lead blocker.

The fullback didn’t play any meaningful offensive snaps last week. The only snap he played on offense was in the victory formation when Ben Roethlisberger took a knee at the end of the first half. I don’t believe he saw a lot of snaps today, but he did see time—and a holding penalty—in what was a clear effort to get the running game going.

While he may have originally earned his keep as a special teams player—a very good one—he has established himself as much more than that, even going to the Pro Bowl last season as a fullback. He hasn’t gotten a lot of opportunities yet this season to establish himself in that area, and even had a bad game in week three, but those have been few and far between.