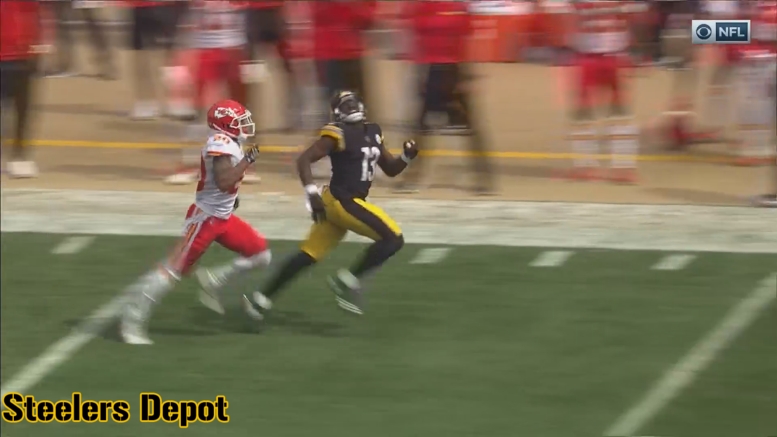 While Pittsburgh Steelers quarterback Ben Roethlisberger has shown so far this season that he’s far from being done, it’s been obvious that he’s not been able to connect as frequently as he’d probably like to with his deep pass attempts, which in the NFL is defined by a throw that travels more than 15 yards in the air past the original line of scrimmage.

If you’re scoring at home, the NFL currently has Roethlisberger’s deep passing completion percentage at 36.4% entering Week 7 and when compared to the other 26 NFL quarterbacks that have attempted at least 25 deep throws through the first six weeks of the regular season, only three of them, Tom Brady, Cam Newton and rookie Josh Allen have lower ones.

Now, it’s probably best to divide Roethlisberger’s deep throws into two categories for closer examination. First, on his deep pass attempts that have flown 16 to 25 yards in the air past the original line of scrimmage, he’s completed 12 of 22 (54.6%) of them for 332 yards and 3 touchdowns without an interception. That’s not a bad completion percentage at all for that distance spread.

However, when you look at the 21 passes Roethlisberger’s thrown more than 25 yards in the air past the original line of scrimmage in the team’s first six games, you’ll find he’s completed just 4 (19.1%) of those for 145 yards with two touchdowns and an interception, which by the way, came in the regular season road opener against the Cleveland Browns when he appeared to not be on the same page with what route wide receiver Antonio Brown was running.

Of those 21 ultra-deep pass attempts by Roethlisbefger in the first six weeks of the regular season, 14 of them were thrown more than 30 yards in the air past the original line of scrimmage and only two of those were completed. One was the long fourth quarter touchdown pass to Brown against the Atlanta Falcons while the other was the long first quarter completion to wide receiver JuJu Smith-Schuster against the Tampa Bay Buccaneers.

Now is also probably a good time to remind everyone that Roethlisberger has thrown ultra deep (longer than 25 yards) to rookie wide receiver James Washington a total of six times and the two have yet to connect. It’s also worth noting that one other of Roethlisberger’s deep pass attempts was a throwaway against the Cincinnati Bengals this past Sunday.

Now that we’ve determined that Roethlisberger’s deep pass problems so far this season have been on footballs thrown more than 25 yards down the field, let’s now examine how accurate he was on the 17 not caught, 15 if not counting the one he threw away and the previously mentioned interception that he wasn’t seemingly on the same page with Brown on.

12 of the 15 other incompleted ultra deep throws were balls thrown down either the right or left sidelines. Of those 12, 5 landed out of bounds. 4 others were slightly underthrown footballs while another one was another miscommunication between Roethlisberger and Brown. The other two included a deep seam overthrow to Brown out of the back of the end zone and a nicely thrown football to Smith-Schuster that was defensed nicely and prevented a touchdown against the Bengals.

While there certainly have been some inaccuracies to blame for Roethlisberger’s poor ultra-deep completion percentage in the first six games, I don’t find myself overly alarmed by it right now and especially since the we saw him connect with Brown down the left sideline for a touchdown a few weeks ago against the Falcons. He’s clearly not yet on the same deep page as the rookie Washington just yet and that’s probably played a small factor in this as well.

We’ll look back in on Roethlisberger’s deep passing numbers in about four or five more games from now to see if he’s improved his completion percentage and especially when it comes to his ultra-deep attempts.