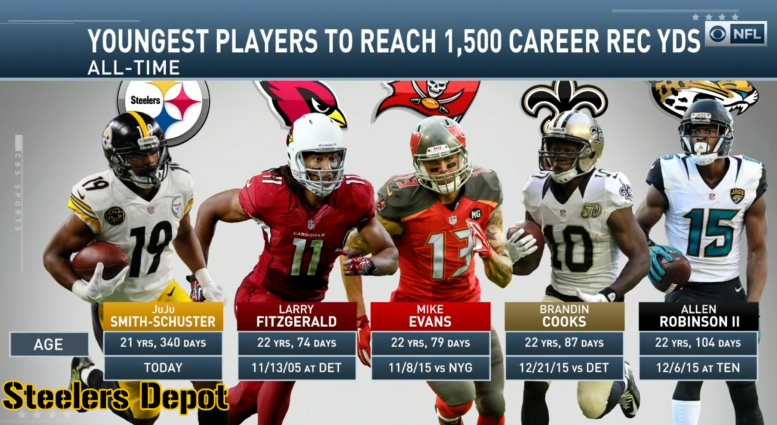 While he didn’t have a huge impact in yesterday’s game, Pittsburgh Steelers second-year wide receiver JuJu Smith-Schuster did leave his mark in the record books. Thanks to his four-reception, 33-yard game against the Cleveland Browns, he passed the 1500-yard receiving mark for his career, in doing so becoming the youngest player in NFL history to hit that mark.

The 21-year-old entered the week with 561 receiving yards on the season, having also just become the fastest player in team history to reach 100 career receptions in just 20 games. For his 20-game total, he had 1478 receiving yards.

Adding the 33 from yesterday on top of that number, Smith-Schuster now has 1511 receiving yards on 104 receptions, along with nine receiving touchdowns, in 21 games played. He is also just shy of 600 receiving yards on the year. Louis Lipps previously reached 1500 yards in 23 games.

JuJu Smith-Schuster has eclipsed 1,500 receiving yards in his 21st regular-season game, setting a team record for the fewest games to the milestone (Louis Lipps, 23) in #SteelersHistory. pic.twitter.com/KRap1ZxF4v

The feat unsurprisingly places the USC product in good company at 21 years, 340 days, Smith-Schuster broke a record that was previously owned by Larry Fitzgerald when he hit 1500 career receiving yards on November 13 in the 2005 season when he was 22 years and 74 days old. He is the first player to reach 1500 receiving yards prior to turning 22.

Since Fitzgerald, three other players also hit 1500 receiving yards early on, and oddly, all of them did so during the 2015 season. At ages ranging from between 22 years, 79 days to 22 years, 104 days, Tampa the Bay Buccaneers’ Mike Evans, the (former) New Orleans Saints’ Brandin Cooks, and the (former) Jacksonville Jaguars’ Allen Robinson all hit 1500 yards during their second seasons.

Perhaps also worth noting is that Smith-Schuster was the first player to do it by the October of his second season. As noted, Fitzgerald did it in November. Evans also did it in November, while the latter two accomplished it in December.

While Smith-Schuster hit 1500 yards just a bit quicker than these other young accomplished wide receivers, they are all on a similar trajectory, averaging about 100 receptions for 1350 yards and 10 touchdowns through their first 21 games.