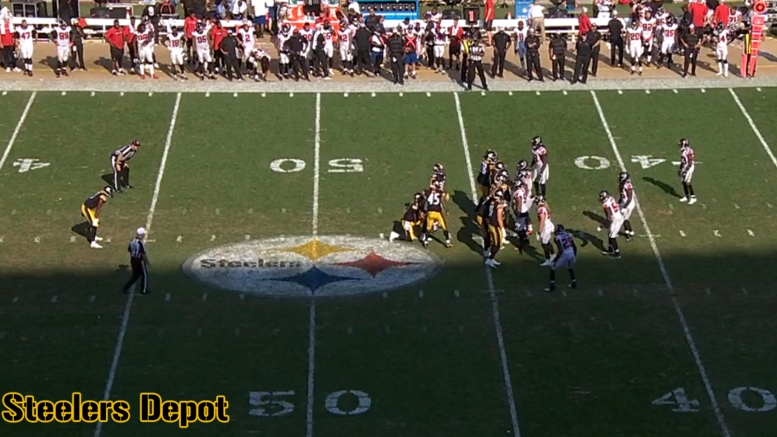 Second-year quarterback Joshua Dobbs officially has one NFL snap under his belt now. It went down in the books as a loss of three yards. And it was a beautiful thing. The Pittsburgh Steelers’ latest backup quarterback to Ben Roethlisberger was called upon with 40 seconds to play in yesterday’s 41-17 victory over the Atlanta Falcons to take a knee to end the game after the defense forced a turnover on downs toward the end of the fourth quarter.

The only times that you ever want to see your team’s number two quarterback play are when there are no stakes to be played. That means either in Week 17 with the team’s playoff seeding secured and no way to improve it, or at the tail end of blowout victories.

The Steelers have faced the former in each of the past two years, but haven’t had too many blowout victories to allow their backups some playing time. And obviously taking one snap in victory formation can hardly amount to significant playing time.

But it did get him on an NFL field in an NFL game for the first time, which I’m sure means something to him. And it means a lot to a team that has not only struggled to put a team away handily, but simply to win games this year.

The Steelers did have two games last season in which former backup Landry Jones was able to get into the game in order to close things out. Both came in the second half of the season during a 40-17 victory over the Tennessee Titans and then a 34-6 win over the Houston Texans. He threw one pass combined.

He never got to see meaningful playing time at the end of a blowout, though. He never completed a pass, and never attempted more than two, during three total opportunities to do so between the 2016 and 2017 seasons. Mike Vick did not attempt any passes at the end of blowout win against the San Francisco 49ers in 2015, either. Nor did Bruce Gradkowski in a 2014 blowout of the Carolina Panthers.

In other words, the Steelers don’t necessarily let their backups fly at the end of blowout wins, even as few and far between as they are, generally only tasked with handing the ball off. Jones got a few attempts to throw a pass, but that is about it.

Roethlisberger is not a player who likes to come out of a game as it is. Dobbs could have come into the game earlier. It was 34-17 with eight minutes left to play when the Steelers got the ball back in the fourth quarter, but it’s understandable why they wouldn’t have wanted to put in the backup just yet with a 17-point lead on a team that has only won one game.

The drive lasted about four minutes, to be fair, and between a defensive touchdown, the Steelers did not touch the ball again until there were 42 seconds remaining.