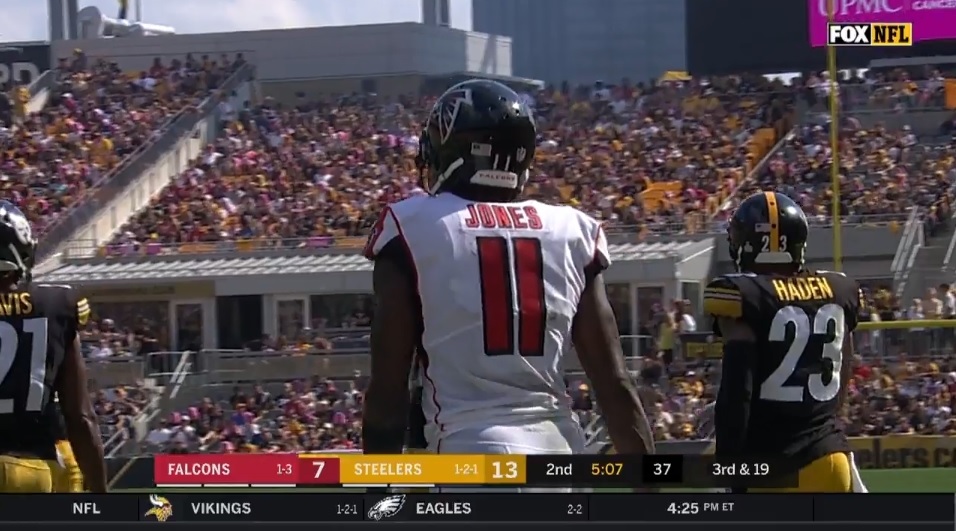 It’s not often Joe Haden is asked to shadow an opponent’s top receiver. Just not how the Pittsburgh Steelers do business these days.

But when they do? Haden comes through in a big way.

Look at the last two games Haden has shadowed the opposing top receiver. Late last year against the Houston Texans and Sunday afternoon versus Atlanta, facing off against DeAndre Hopkins and Julio Jones. The results?

Haden’s performance looks even better than those numbers.

Neither of those players caught a pass in the first half. Hopkins didn’t nab his first catch until there were 38 seconds left in the third quarter. Jones waited even longer, not getting on the box score until early in the fourth. For Hopkins, it took a highlight reel catch for his touchdown while Jones didn’t sniff the end zone, though for him, that’s been the norm all year.

Bottom line? Both of these guys only did their damage in garbage time, the game well in hand, and that’s partially a product of throwing it so much that naturally, of course those guys found a couple passes completed their way.

As Matthew Marczi wrote yesterday, it was a matchup and task Haden takes plenty of pride in. And might have gotten inside of Jones’ head in the process.

“They had a good gameplan for me,” Jones told Joe Rutter of the Tribune Review. “Discouraged me early on.”

Haden essentially turned back the clock, both in play and in use. With the Cleveland Browns, he was routinely asked to shut down the offense’s top receiver so being asked to do so here is nothing new. And in his play, he’s been solid, one of two corners on this team – Mike Hilton is the other – who have legitimate ball skills in this secondary.

It’ll be interesting to see what the Steelers’ approach is this weekend against A.J. Green and the Cincinnati Bengals. He’s done it before with the Browns and got the best of him. The biggest obstacle in doing so is having the comfort level to move everyone else too, though the rest of the secondary held their own against Atlanta Sunday. Even Artie Burns seemed to have his best game of the season, allowing only one catch on four targets for nine yards.