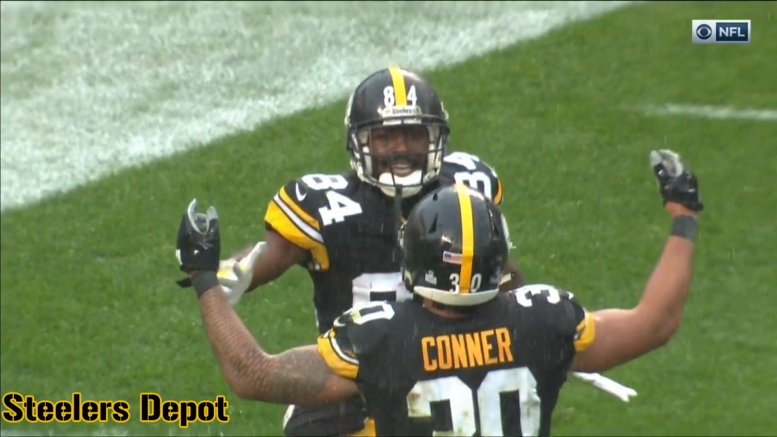 Pittsburgh Steelers running back James Conner exorcised some demons on the field today, making up for the lost fumble and slow finish to his starting debut in the season opener against the Cleveland Browns that heled lead to a tie game. He rushed for 135 yards with two touchdowns and added 57 receiving yards, but became ineffective in the fourth quarter and overtime.

Today, he rushed for 146 yards with another two touchdowns with 66 receiving yards, and much of that came late in the game on a closeout drive. He did fumble the football earlier in the game, but that is long forgotten, and he showed no signs of it weighing on him.

While the opponent is the same, the first game out of the bye week is also simply a good barometer by which to measure Conner’s growth from his first career start to his seventh. He has posted four 100-yard rushing games with two rushing touchdowns in each of them, which is more such games than Le’Veon Bell had had in his entire career.

In perhaps the most significant sign in the Steelers’ belief that he is a complete back, they put him back in the game for one snap after Jaylen Samuels replaced him, the team up 14 points at the time. it was third and three from the Browns’ 22, and they wanted to close out the game.

It’s becoming not just difficult but very nearly impossible for there to still be lingering doubt among the skeptics of Conner, who is one of the hottest players in football right now. He has three consecutive 100-yard rushing games and has scored two touchdowns in each of them.

For the moment, he is now on pace to record 1369 rushing yards 738 receiving yards for a total of 2107 yards from scrimmage, which would be the second-most in team history behind Bell’s 2215 yards in 2014, and just the third 2000-yard season in team history.