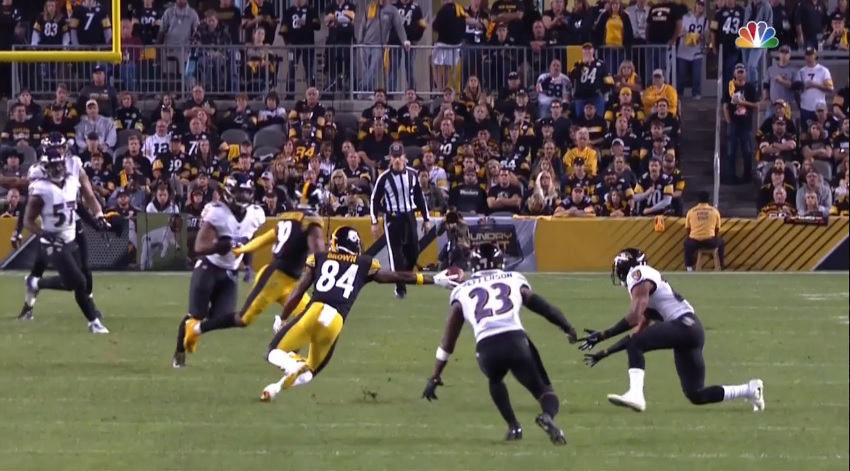 Each and every football game in the National Football League comes down to a handful of plays throughout the four quarters.

On Sunday at Heinz Field, the Steelers 26-14 loss to the Baltimore Ravens on Sunday Night Football again came down to a handful of plays that turned the game on its head.

Like I do every week, I’ll take a look at the 5 biggest plays that helped change the outcome of the game from my perspective. Let’s dive in.

Trailing 17-14 late in the third quarter, the Steelers found themselves facing a 3rd and 12 deep in their own territory. The Steelers dialed up the right route combinations, as Antonio Brown found himself with separation and a wide-open field in front of him on a deep post down the middle of the Ravens defense.

Instead, Ben Roethlisberger flat-out missed him, firing low and behind Brown that the star receiver did a great job of breaking up a potential interception.

Instead, the ball falls harmlessly for an incompletion that saw both Brown and AB show their disgust. The incomplete pass forced a punt to the Ravens, which Baltimore used to put points on the board again with a field goal by Justin Tucker to make it a 20-14 game.

This was just the sixth play of the game offensively for the Ravens, but it really set the tone for the game because the Steelers defense again flubbed up with a miscommunication in coverage, allowing John Brown to get behind Joe Haden and Cam Sutton down the right sideline for the game’s opening score.

Brown was a major deep threat coming into the game, and game film from the first three weeks for the Ravens showed how willing Joe Flacco was to look for Brown deep. That didn’t seem to matter to the Steelers as they let Brown slip behind the defense a couple of times in the loss. The first one set the tone for what would be a poor defensive performance yet again.

Sometimes it’s not the play itself that changes a game, but a call by the officiating crew.

This one ranks right up there with one of the worst calls I’ve seen in the last 10 years, no exaggeration.

James Conner threw a great block taking out three Raven defenders on a 17-yard catch-and-run by Antonio Brown down the left sideline. Instead, the officiating crew called Conner for an illegal crack-back block, wiping out Brown’s run, taking the Steelers out of great field position at the Ravens’ 21-yard line.

What could have been a touchdown drive ended up with the Steelers settling for a field goal from Chris Boswell that made it a 14-3 game. If that bogus penalty isn’t called, who knows what happens moving forward.

Play 2 — 3rd & 4 at PIT 31 (9:53 – 1st) (Shotgun) B.Roethlisberger pass short left to V.McDonald to PIT 31 for no gain (T.Jefferson). FUMBLES (T.Jefferson), RECOVERED by BLT-T.Jefferson at PIT 31. T.Jefferson for 31 yards, TOUCHDOWN. The Replay Official reviewed the runner was not down by contact ruling, and the play was REVERSED.

Three plays into Pittsburgh’s first possession of the game, disaster struck for the Steelers.

Ben Roethlisberger hits Vance McDonald in the flats to the left of the offense, hoping for McDonald to make a play in space. Instead, Baltimore’s Tony Jefferson gets his hand on the football and rips the ball away for the fumble and takeaway for the Ravens.

Four plays later, Baltimore is in the end zone again just under four minutes into the game, giving the Ravens a 14-0 lead on the road.

Two plays after a 71-yard catch-and-run by John Brown threatened to completely bust open this game, the Steelers defense stood tall, as Coty Sensabaugh and Sean Davis came up with a big stop at the goal line on Alex Collins, knocking the ball out in the process, allowing Terrell Edmunds to recover.

If Collins punches that one in, it’s 21-0 early in the second quarter. Instead, the Steelers got a stop and marched down the field for a field goal, making it a 14-3 game, marking a 10-point swing for the Ravens.