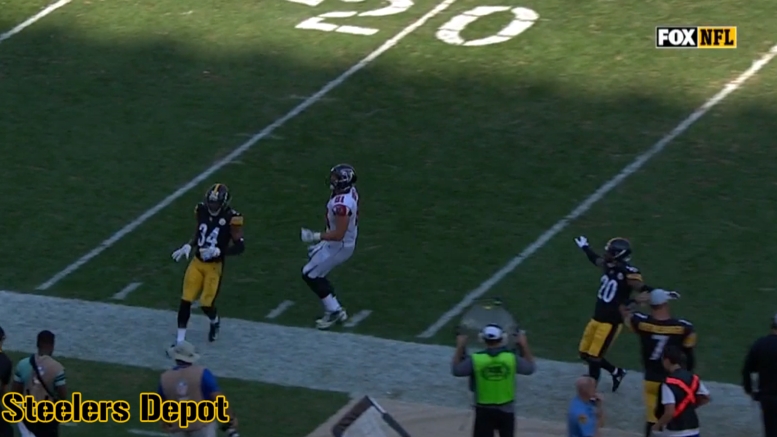 Cameron Sutton has been seeing the field in some form or fashion since the season opener for the Pittsburgh Steelers, but Sunday was his first full-time as the dimeback, or dimebacker. With injuries to Morgan Burnett and Nat Berhe, he has become the next in line for that sub-package, quasi-linebacker position.

But it’s not a role that he played full-time in the game. In fact, for the majority of Sunday’s win, when the Steelers did use the dime package, he typically lined up in coverage either outside or in the slot. But he did line up near the line of scrimmage when they closed out the game in that look.

As you might guess, it was used always on third downs while the score was close. Its first usage came just five minutes into the game on third and six. On this occasion, he actually did line up in that dimebacker role, dropping into zone coverage. He didn’t give up the reception, but was credited with making the tackle.

Later, still in the first quarter, he rushed the passer on another third and six. The defense peppered the B Gap with L.J. Fort coming too. Fort got there first, and Matt Ryan hit the dirt like vintage Peyton Manning. Hey, if I’m paying him $30 million, I probably want him to do that too.

But as promised, the majority of his snaps in the first three quarters actually saw him lined up in man, as on this third-and-five in the second quarter. While he was not a part of the action on this play, he did a nice job of sticking close to his man down the field.

In the third quarter, once again lined up as a moneybacker, Sutton blitzed again. Unfortunately this looks like most of his blitzes. Only this time, not rushing from the perimeter, he didn’t have to worry about timing it poorly. Good thing Mike Hilton is back.

In the middle of the fourth quarter, the Steelers broke out the dime on second and long after taking a big lead. Ryan looked the way of tight end Austin Hooper down the field with Sutton in coverage. While the pass was not on target, he ran with him well once again.

Finally, in the game’s closing moments, in the moneybacker role, he registered another tackle as Hooper made a five-yard reception over the middle to convert on fourth and two. As a reminder, the Steelers were leading 41-17.