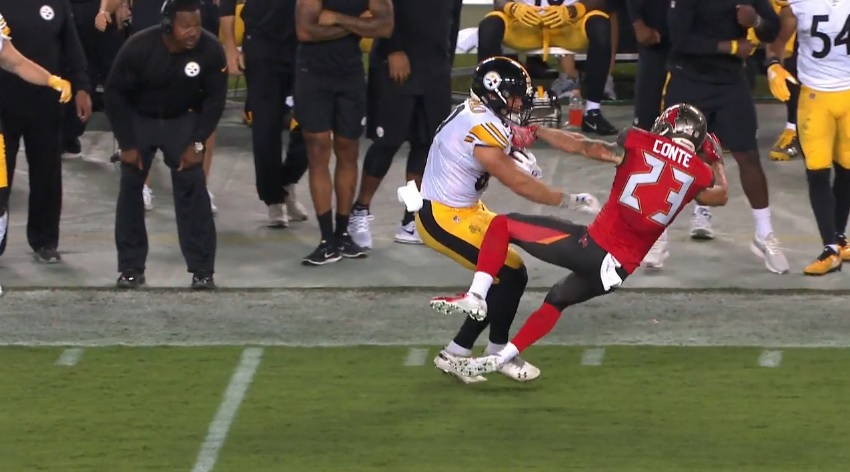 Vance McDonald’s stiff arm of Chris Conte is going to be a play you’ll see 100 times during the season. You can count on it showing up at year-end montages. And the play took over the Internet, even giving McDonald a good laugh out of it.

Dear Internet, you are so creative. Thank you for the many laughs this evening..

But at the same time as the videos, and the memes, and the jokes, McDonald is empathetic to the other side. Conte, the man he stiff-armed, reportedly came into the game playing on a torn PCL in his knee and landed on injured reserve after the game.

As someone who has dealt and played through injury himself, McDonald said he understood what Conte was going through.

“It’s frustrating to be on that list,” McDonald told the Trib’s Chris Adamski of Conte landing on IR “I’ve had it many times in my career, and I obviously hate hearing that.”

He went on to muse about how things played out from Conte’s point of view.

“I actually had time this morning thinking of it in the training room while I was getting ready for the day,” he said. “I was thinking, ‘Man, he’s got to walk across the field and to be on the other side of something like that is obviously not the place you want to be.”

Despite playing only ten snaps, Conte had a rough game. Early, he was cracked and knocked down by JuJu Smith-Schuster. McDonald hit him with a less forceful stiff arm on a crossing route and then, of course, tossed him aside on his 75 yard score. Given his injury, it’s easier to understand why he struggled.

Tampa Bay also appeared to blow a coverage on the play, leaving Conte all alone with McDonald with tons of grass to defend. A tough situation to be in, all things considered. So credit to McDonald for taking the high road and putting himself in the defender’s shoes.