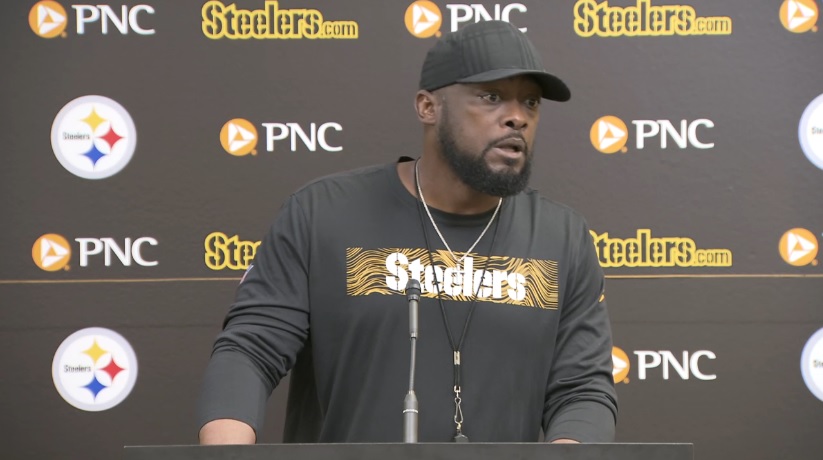 The Pittsburgh Steelers made the difficult decision on Saturday to move on from veteran backup quarterback Landry Jones in lieu of keeping second-year quarterback Joshua Dobbs. During Tuesday press conference, his first since the team made their final roster cuts, Steelers head coach Mike Tomlin was asked to talk about how difficult of a decision it was for the team to move on from Jones.

“Yeah, it was a very difficult decision and a lot of our decisions were difficult ones and I just think that speaks to the process that we had a good 90 [man roster],” Tomlin said. “You know, really it wasn’t about what Landry did or didn’t do, it was about what Josh did. Josh was presented with very tangible challenges, he didn’t shrink in the face of it. As a matter of fact, he rose up in the face of it and provided good and consistent play for us.

Tomlin the went on to talk about some of the playing traits that Dobbs has exhibited since he was selected in the fourth-round of the 2017 NFL Draft out of Tennessee and how his overall development as a quarterback played into the decision to keep him over Jones.

“We’ve always acknowledged that his mobility is an asset to him,” Tomlin said of Dobbs. “I think we all got comfortable with his prudent use of it, or his prudent displays of use of it, over the course of the preseason. It’s helpful to him, it’s helpful to us. We just got really comfortable with his growth and development. We expect a lot from second-year players, regardless of position, in terms of growth and development. We spent a lot of time talking about the growth and development of James Conner and appropriately so and he’s put that on display through this process. You could say the same about Josh Dobbs and I think that’s why he’s here.”

Jones, who like Dobbs entered the league as a fourth-round draft pick, didn’t play very much at all during the recent concluded preseason. Instead, the Steelers chose to let Dobbs and rookie quarterback Mason Rudolph, the team’s first of two third-round draft picks this year, play extensively during the preseason.

Because Jones wasn’t allowed to play a lot during the preseason, Tomlin was asked during his Tuesday press conference if that decision revolved mostly around them already knowing enough about the Oklahoma product, who has been Ben Roethlisberger’s backup for the last few seasons.

“Guys, I’ve been very transparent about this process in terms of how we distribute reps and I’ve even been poignant about it at times,” Tomlin said. “The guys that we know a lot about we see less of because it’s our job to learn about people that we are evaluating so that we can best make decisions.

“I’ve mentioned that in regards to Darrius Heyward-Bey in terms of how we distribute wide receiver reps. I’ve mentioned it in regards to [Jordan] Dangerfield in terms of how we distributed safety reps, getting an opportunity to look at Marcus Allen and Nat [Berhe] and others and the quarterback is no different. We’ve got a decision to make based on the limited number of reps. It’s our job to acquire information about all parties involved. We did that and then we made the decision accordingly.”

In the Steelers preseason finale against the Carolina Panthers, Dobbs had his best game to date as he completed 8 of his 12 total pass attempts for 151 yards and a touchdown. He also ran for another 18 yards and a touchdown in that contest that he started. On Tuesday, Tomlin was asked if Dobbs’ performance in that game against the Panthers was what clinched him a roster spot or if his steady rise since OTA practices played a big part in that decision as well.

“Both,” said Tomlin. “You know, I was very straightforward when I talked about what the Carolina game meant and people’s ability to lean in and deliver above the line performance in spite of all the anxiety or pressure associated with that performance. But it’s also a part of a larger body of work, not only for him, for all of them. And he’s just an example of that.”