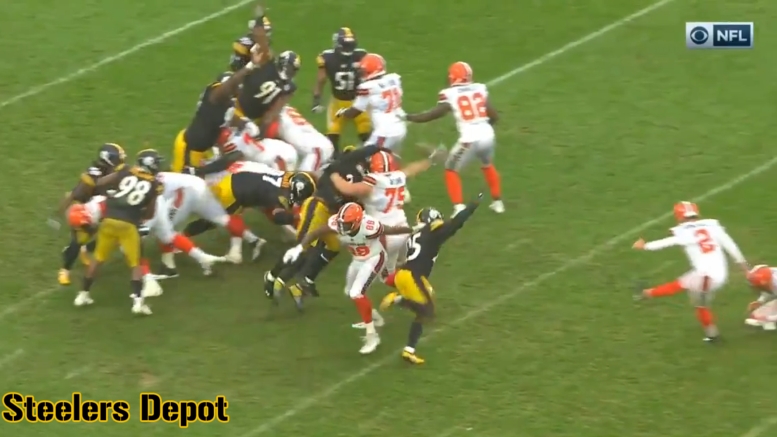 The Pittsburgh Steelers may not have won or lost this won, but there were certainly winners and losers on the field. second-year outside linebacker T.J. Watt, making his debut start on the left side after missing all of the preseason and almost all of training camp, was a clear winner.

In the 16th start of his career, the former first-round draft pick already gained more than half of his sack total from his rookie season, bringing down Cleveland Browns quarterback Tyrod Taylor a whopping four times, which according to Alex Kozora’s research is the most in a game by a Steelers defender since Joey Porter in 2001.

It was part of a high-impact game in which he also recorded 11 total tackles, including multiple tackles for a loss. As if that were not enough, he gained pressure up the middle on the Browns’ would-be game-winning field goal in the final minute of overtime. The official play-by-play credits him with the block, which is the second of his career after getting one last season as well. He essentially saved the team from a loss.

Watt made his debut as a starter on opening day a year ago, and he was able to notch two sacks and an interception in that one. This one was even better, showing how much of an impact player he is capable of being on defense, providing pressure in the pass rush, being stout against the run, and consistently showing a high motor.

While that all might be hard to swallow in a performance in which they gave up 21 points to the Browns—though one scoring drive started literally at the one-yard line—and in which the Browns netted 177 rushing yards, Watt can still be credited with putting forth a strong individual effort.

We will have to go through the game over the course of the week to take a deeper look at this effort, but in this initial-reaction post, it’s fair to say that he is getting his second season in the league off to a roaring start.

The Steelers are desperate for a new impact player on the defensive side of the ball with Ryan Shazier’s injury perhaps sidelining him from the playing field permanently, and Watt might be that player.

That’s not to oversell the numbers that he put up in the game. It’s not as though he beat a tackle for all of his sacks. He dominated a tight end on one of them, for example. But he is a dynamic player who can contribute at a high level in all three phases: rush, coverage, and run defense.

This is made all the more remarkable by the fact that he was not healthy, missing all four preseason games, in which he normally would have played. To get out of the gates so hot without needing to work his way back into form is a great sign.