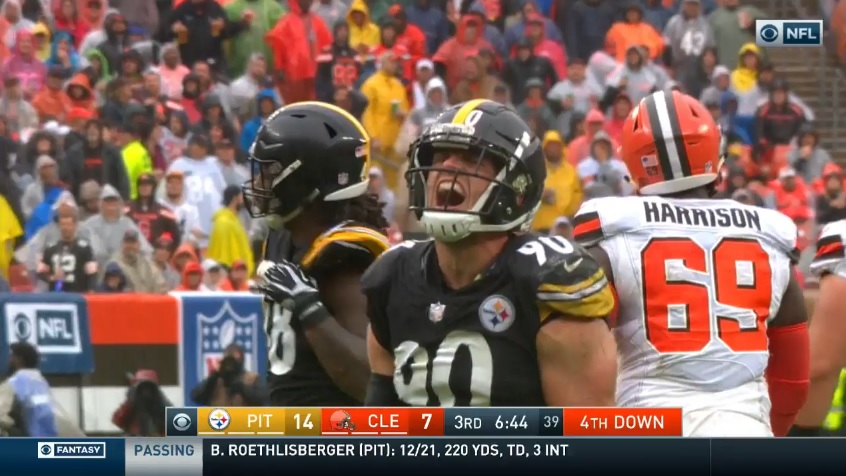 No, T.J. Watt’s whopping four sacks is not a Pittsburgh Steelers record. He fell just a half-sack shy of that mark, set by Chad Brown in 1996. But that performance did still set one franchise record.

Watt is the fastest Steeler to record 10+ sacks in team history, hitting that mark in just 16 games. He now has 11 in his career.

The previous record was held by Keith Willis who needed 17 of them to get there.

To put that in perspective, here’s how long it took for select other Steelers.

Two short caveats to that stat. One, sacks have only been official since 1982, so I don’t know how long it took anyone on the Steel Curtain to achieve this feat. And technically, Kevin Greene did it in 15 games, but I’m focused on players who began their career in black and gold.

Watt racked up four sacks Sunday afternoon against the Cleveland Browns, the best player on the field playing the best game of his young career. His run defense was excellent and he blocked the game-winning kick Cleveland attempted in the dying seconds of overtime. He was named AFC Defensive Player of the Week for his efforts.

Already, Watt has more sacks than Vince Williams. Or Casey Hampton. And he’s only one behind Troy Polamalu. Sure, those guys weren’t pass rushers, but they played in a lot more games too.

Given the need at outside linebacker when Watt was drafted, he’s had an opportunity most Steelers’ rookies don’t. He’s part of the new age of thinking where those guys get to play, not sit and learn on the bench. But he’s making the most of that opportunity and already proving to be a home run pick by Kevin Colbert and company.