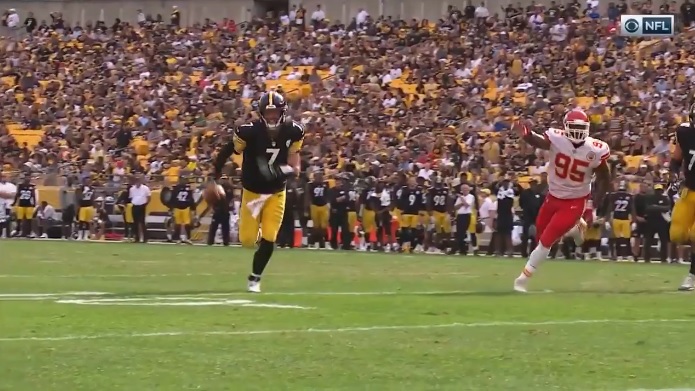 Your Steelers vs Chiefs winners and losers.

Ben Roethlisberger – It wasn’t pretty early but this was a game put all on #7’s shoulders. Not to mention a sore elbow. His 35 attempts at halftime were the most he’s ever thrown and he ended the day with 60, second most in his lengthy career. He brought the team back and deserved to win this game. Too bad the defense didn’t help him. At all.

Jesse James – I’ve really grown to be a big fan of Jesse James this season. No, he’s not an All-Star, never will be, but his consistency and reliability is remarkable, especially compared to all the instability seen at the position since Heath Miller’s retirement. James was a big play threat, showing that chemistry with Ben Roethlisberger after practicing with him every single day since 2015, and made tough, combative catches over the middle. Lot of respect for him. His 138 yards were more than Miller ever caught in a game.

JuJu Smith-Schuster – Smith-Schuster was the other of Roethlisberger’s favorite targets, finding him on the run over the middle time and time again. Great YAC ability and toughness. Finished the day with 13 grabs for 121 yards and a score.

Alejandro Villanueva – It isn’t easy to evaluate the offensive line the first time through. And maybe I’m looking at too small of a sample size. But Villanueva did a nice job in pass protection, including on back-to-back plays in the first half, one that resulted in a James touchdown.

T.J. Watt – Very hard to find a bright spot with the way this defense performed. As a pass rusher, he didn’t do anything special, but I liked his run defense. Helped create the safety in the 4th quarter. Jon Bostic played well too, though he was put in some difficult matchups on Travis Kelce. Watt once had to cover Sammy Watkins which, uh, isn’t great.

Defense – I mean, I don’t even know what to say here. It was bad. All of it. I get that in pockets, the defense was put in tough spots and short fields to work with. But based on what you saw: missed tackles, blown coverages, limited pressure, it’s objectively terrible. Top to bottom. Feel free to comment on specific players, like Artie Burns, Bud Dupree (who lined up offsides, TWICE), even Mike Hilton seemed off, but it’s all terrible.

Special Teams – Again, don’t know where to begin. You know it’s bad when the first two names here make up 2/3 of the ball. Chris Boswell might have the Yips. Jordan Berry, though it’s important to note much of those short punts were intentional, still wasn’t good enough. The punt coverage sucked from the start, letting De’Anthony Thomas run wild on his first attempt, no one even close to him.

And they were called for illegal formation twice, the latter negating a great runback by Antonio Brown. Lost 25 yards because of it. That’s on Danny Smith, no doubt about it. I’m objective enough to say he was bad.

Keith Butler – Really, you can put all the coaching here. But Butler’s unit is the one gashed. Terrible matchups, Watt on Watkins, Bostic on Kelce, and the defense got ripped down the seams all day long. It’s fair to wonder if he’ll make it through the season, let alone survive after it. As much as the Steelers value continuity, I don’t like his chances.

Ramon Foster – Obviously, he’s had to play catch up coming back from his knee injury. But the first two weeks haven’t been kind to him. Shaky performance against the Browns and arguably worse today. Chris Jones got to him early and Foster was routinely walked into the pocket several times.