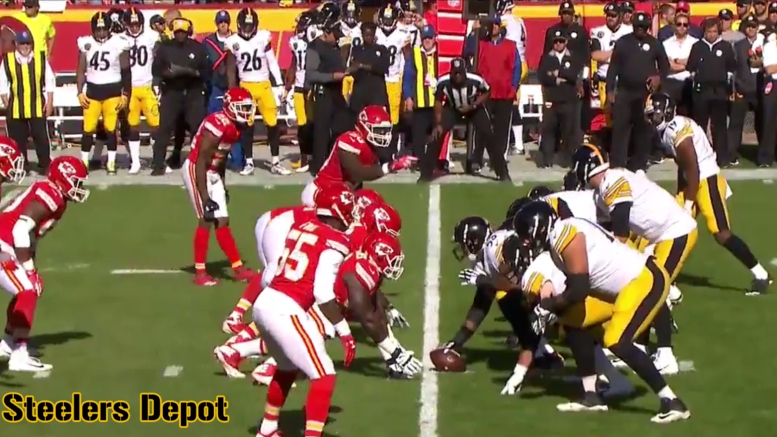 The Chiefs have too many YAC threats. Travis Kelce. Kareem Hunt. And definitely Tyreek Hill. The Chiefs are going to move the ball, their offense is too good, but even if the Steelers manage to keep the ball in front of them, they have to rally and wrap up. One missed tackle and look out, could be a long gain. To Keith Butler’s credit, he’s done a nice job of that in recent matchups.

One hidden issue last week was the downside to running more man coverage than the Steelers have before. Tyrod Taylor has able to break contain and with backs to the football, reel off big chunks of yardage and convert on third down.

Patrick Mahomes isn’t quite that type of scrambler, he’s much more of a threat with his arm, but I’m curious if Butler will alter his script in Week Two. And hopefully decides against rushing three.

3. The offense can run against base and nickel personnel. Like I wrote in our scouting reports, the Chiefs have sorted out their ILB situation better than in recent years. On paper, they can play the run more effectively, though they still have to prove it on the field after allowing 5.6 YPC vs the Chargers last week. But I want to see the Steelers show similar success as the past, made a little harder without Le’Veon Bell and the low odds David DeCastro plays.

Again, one of the largest issues with the Steelers defense last week. And like I wrote above, Mahomes is much more capable hurting you with his arm and weapons around him. Can’t let him break contain and force the defense to cover for 5-7 seconds. That’ll burn you sooner than later.

2. Linebackers fail to read their keys.

The defense has done a nice job not against KC but several teams who love window dressing (Cleveland, Tennessee come to mind) in the recent past. But one issue with Vince Williams and Jon Bostic, even last week, was being vulnerable to some of the false keys and “noise” Cleveland created. Some of that is expected, those are their keys and that’s what most players would do, but it’s a good way to get linebackers out of position and moving slow. With the speed on the Chiefs offense and ability to reach the perimeter, they can gash the Steelers defense more than other teams.

Pretty obvious one that yes, you can apply to really any team. It was an obvious issue last week, though six turnovers will certainly do that to you. Steelers don’t need to give this Chiefs’ offense a shorter field. Jordan Berry must play better too, clearly. The rain can be used as an explanation, though not an excuse, but that only works for so long.