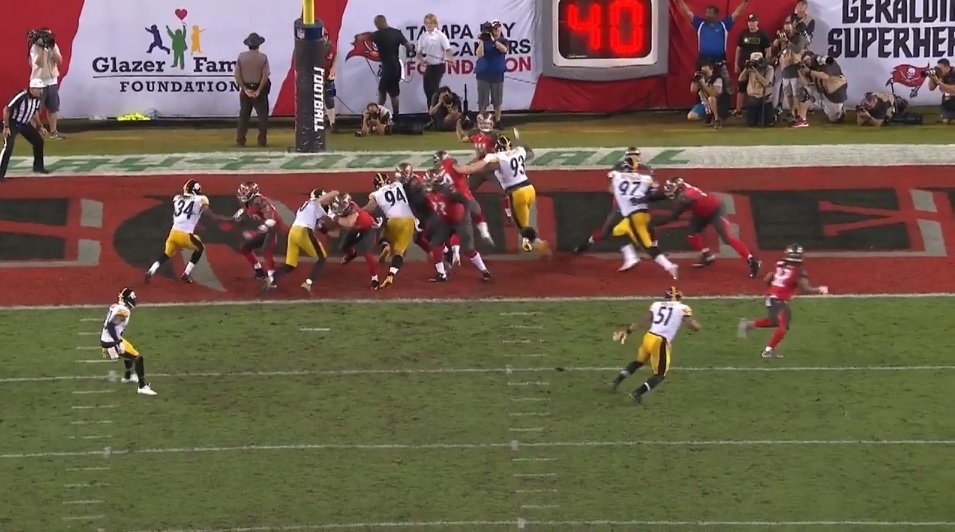 For those of us who have suffered from various forms of purple nightmares since the Ravens drafted one Ray Lewis years ago, the rivalry is ripe with open wounds.

Sure. The Steelers have had the upper hand the last few years, but losing to the Ravens causes nearly as much post-traumatic depression as getting eliminated from the playoffs.

That’s because the Ravens are just the Cleveland Browns in wolf’s clothing.

Even though former owner Art Modell took the once Ohio-based storied franchise to Baltimore in 1996 in the dark shadows of night, they will always still be the dreaded Browns.

So…now we have the Bad News Browns…and the Purple Browns.

The challenge this year is that the Bad News Browns actually tied us in the game opener!

And the Purple Browns look resurgent with a 2-1 start to their season with two AFC wins already in their bank, although their one loss was a divisional setback to the Cincinnati Bengals.

What’s at stake for the Steelers? Well…their whole season is certainly not on the brink. But the first quarter of play certainly is. What sounds more hopeful, a 1-2-1 record with a loss and a tie to divisional foes, or 2-1-1 including a home victory against the Ravens?

So how will it come out? You got to Spin it to win it.

Yeah. About That Win.

Feel good about the Steelers 30-27 victory over the Tampa Bay Buccaneers? Well…at least it was much better than losing.

Yet…the team scored 30 points in the first half…and then laid an offensive goose egg in the second half. Yes, they won. But did it look like a clutch performance to you?

Even a casual observer can tell the team is reeling from the distractions and costs of the Le’Veon Bell debacle.

The offense is looking just fine without Bell, but what about the other side of the team? Do you think that defense could have used that 50 million dollars that were being waived at Bell in desperation?

You could say it’s easy to armchair quarterback the decision in hindsight, but the truth is there was plenty of foresight opportunities for the Steelers. They simply ignored all of the red flags since the beginning of Bell’s career. This sad result shouldn’t be a surprise to anyone, and certainly not to the Steelers front office.

Maybe the team can patch some things together to make the defense bearable as the offense continues to rise and carry this team. But it’s hard not to get the sinking feeling already the Steelers are a superstar or two shy on defense from being a genuine Super Bowl contender.

Yeah…those Bell dollars and trade bait could have come in handy. That’s a major mistake that will be hard to overcome in 2018.

How did our kicking team turn into…this? Has anyone forgotten to tell Chris Boswell he is contractually obligated to make field goals…and cough, cough…extra points? The kiss of death for kickers is when a head coach needs to go on record saying, “I trust him.” That usually occurs shortly before the coach calls the general manager and says, “How’s that search coming along?”

The Boz has been a great one for the Steelers and a fan favorite for the past few years and he certainly earned his rich, fat contract this offseason. But, the place for kickers to find themselves is in incense-filled caves at the top of distant alpine peaks…not on an NFL football field. Unfortunately for those of us who really like the guy, he’s just one missed game winning attempt away from hitting waivers. That is the life of a field goal kicker.

Putting On The Switz

We’ll skip talking about punting this season, lest we get too macabre on the Spin. So instead let’s shift to discussing a bright, shiny, new object. How about that Ryan Switzer? What a refreshing change it is to have an exciting returner on both kickoffs and punt returns. Perhaps the greatest benefit is having a guy that is good enough to not want you to risk having All Pro Antonio Brown out there. Yet…that’s not all with Switzer. There’s more! He is just beginning to get Ben Roethlisberger’s eye on offense and adds a dynamic twist to the playbook. Switzer is definitely auditioning to be on General Manager Kevin Colbert’s greatest acquisition hits list.

The intrepid Steelers Depot writer Alex Kozora posted this observation about the defensive line in general and Dan McCullers in particular on his Twitter account this week:

Those who have suffered through (bless you) my articles the past years know how huge of a fan I am of Big Dan. I’ve even been accused, only half-jokingly, by top Steelers Depot brass of being a shadow agent for the big fella.

It’s true. He’s my favorite Steeler to watch. I always love when he’s in the game.

I suppose my strange appreciation of McCullers is grounded in the suffering we had several years ago when our defensive line went in a serious tailspin when Steelers great Casey Hampton retired.

For those of you who don’t have too many scarred memories to remember, there was a period there when opposing offensive lines shoved our d-line back like they were filled with helium. I would watch and wonder how a 350 pound man could be tossed back five yards so effortlessly.

So…when the Steelers drafted McCullers in the sixth round, and everyone was predicting he would be cut before he made it to rookie camp, I instead was fascinated every time he lumbered out onto the field.

There are simply two choices with Big Dan for opposing offensive coordinators. You are going either going to double or triple team him, or you are going to have your center pushed into the front chassis of your quarterback.

I never understood why that wasn’t considered to be a major asset by the coaches, most fans and the disparaging media mob that predicted he would be dumped from the team roster over and over again.

Oh yeah. It was because he is a nice guy. Very un-Steeler like apparently.

In a time when players are in the news for all of the wrong reasons, isn’t it refreshing to have a Gentle Giant of a man who’s actually a nice guy?

Who cares that if after crushing a quarterback into human pulp on the field that he might feel inclined to reach down, offer a hand and say, “Sir, I didn’t hurt you, did I?”

It was Mean Joe Greene who famously criticized Big Dan for essentially being too soft. Now all of us Steelers fans love Mean Joe, and revel in the legendary stories like the time he rattled his helmet through the locker room when he was disappointed with his teammates.

We like having the toughest guy on the field. That’s Steelers football.

But, you can also be sure some of his teammates thought of Joe as more of a bully…and yes, at times a jerk. That’s fine. He’s the great Mean Joe Greene.

No…there is nothing wrong with having a Gentle Giant on the team. That’s what makes Big Dan such a compelling character. Please…please…stop with insisting that we need to get him “angry” for him to be able to compete at this level.

And stop trying to claim something “suddenly changed” this season in McCullers and that new defensive line coach Karl Dunbar somehow figured out the secret to putting a burr in Big Dan’s saddle.

How about we just start appreciating Dan McCullers for what he is. That is, a special weapon. No…not a complete player that is going to make us forget about Reggie White…or Mean Joe Greene.

The reality is his game controller doesn’t work very well shifting left or right. He won’t be able to chase down too many athletic quarterbacks.

But, if you need someone to push the offensive line backwards, he is a unique talent, and a joy to watch. He is the ultimate D9 Dozer Tractor on a team that could often use that power in the middle of the field.

Former defensive line coach John Mitchell never got this. He was wrong.

So were most of you. McCullers was the same player filled with potential five years ago as you’re seeing flash today.

The only difference now is he is getting the opportunity to express himself. In his perfectly powerful…and gentle way.

So, what about the team coming in for a visit? Yes, those Baltimore Ravens. They will be intent on beating the Steelers as their loss to the Bengals was costly for them. If they go down two games in the division they’ll have a hard time digging out.

And as previously stated, this game has huge importance for the Steelers as well. Obviously.

Will the Steelers win? You’ll know in the first five minutes of the game. It will all come down to whether Pittsburgh can impose their will in the trenches with their returning to health offensive line. If they can make holes for James Conner and give Big Ben time, the Steelers will prevail.

If Conner hits a brick wall, and if Roethlisberger gets flushed out early and often, then look out. It will be a long, humiliating night that may come down to a last minute field goal attempt. Yes. There is that.

Win? Then the Steelers can clean the slate on yet another sluggish Tomlin-era start.

Lose? Then the conversation changes suddenly from, “Are the Steelers a Super Bowl contender?” to “Will they manage to squeeze into the playoffs?”