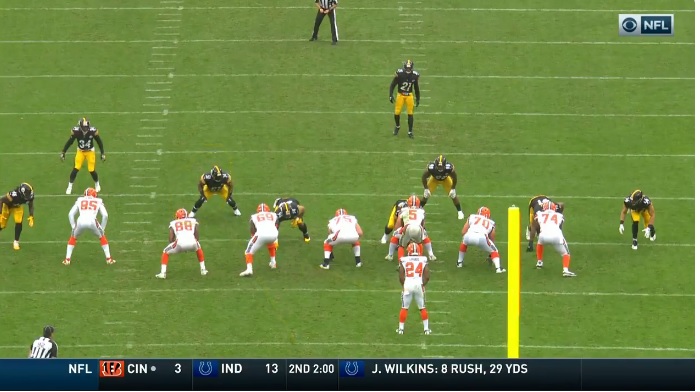 Going to be pretty tough for me to top the Pittsburgh Steelers TYING the Cleveland Browns. But I’ll give it my best shot. Stats of the weird.

– First, you know we gotta start with the score. This is the third tie the Steelers have been involved in since the 1970, The others? 2002 vs Atlanta, the one where Plaxico Burress caught the ball at the one yard line. And 1974 against the Denver Broncos, a 35-35 draw in Week 2.

It’s the Steelers first tie EVER against the Browns.

– Sticking with the score, it’s only the 2nd time since the merger there’s been a tie anywhere in the league opening weekend. You have to go back to 1971, when the Broncos and Miami Dolphins ended things 10-10.

– A stat certainly lost in all the mess but Antonio Brown finished today with 93 yards receiving, giving him 10,003 in his career. He becomes the 46th player in NFL history to accomplish such a feat and only the 2nd Steeler (Hines Ward). He needs 58 to pass up 45th place Shannon Sharpe.

– The Steelers lost the turnover battle -5 today. Heading into today, their record with a TO margin so bad was 1-36. The only win they’ve ever had in such a game was a 17-12 win over Tampa Bay back in 1983. Could’ve made it two today…

– James Conner entered today without an NFL reception. He ended it with the most catches he’s had in a game, college or pro, finishing with five of them.

Watt’s four sacks double what Jarvis Jones did in any single season. Jones had six in his NFL career.

– In their seven meetings since 2015, the Steelers have sacked the Browns 45 times. Extrapolate that over a full season and Pittsburgh would’ve finished the season with 102 of them. They’ve registered at least four QB takedowns in every game.

– Tyrod Taylor went 15/40 today, completing just 37.5% of his passes. That’s the worst completion percentage by any opposing QB the Steelers have faced since Mark Sanchez (10/27) in 2012.

The last QB to not lose the game with a QB percentage that terrible? David Carr in 2002, the infamous game where the Texans did nothing (Carr completed 3 of 10 passes) and still won 24-6.

– In the Mike Tomlin era, only two punt returners (minimum 5 returns) have averaged 11 yards per punt in a game. Eli Rogers last season and Ryan Switzer today. Nice debut for him.

– Six turnovers by the Steelers today are their most since a 2012 loss to the…Cleveland Browns. They haven’t had that many giveaways and not lost since 1997, a 24-22 win over the Colts.

– Pittsburgh’s 12 penalties today are the most in a Week One opener since…last year to Cleveland. Messy start the last two years. Made last year’s game close, partly why today ended in a tie.

– Finally, the 35:15 minutes the Steelers held onto the ball is the most since 2009, an overtime victory against Tennessee. Had the ball for over 36 minutes that day.