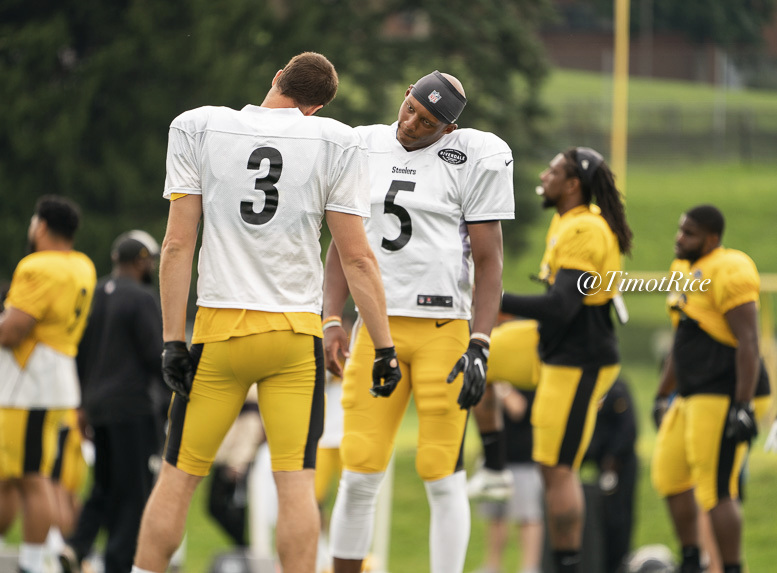 Several weeks ago, Pittsburgh Steelers quarterback Ben Roethlisberger spoke very admirably about his now former backup, Landry Jones, during a media interview. In short, Roethlisberger said that Jones had become a teammate that he trusted when it came to him being his eyes before, during and after games.

However, now that Jones has been released, Roethlisberger was reminded about those previous comments he had made about trusting Jones during his Tuesday interview on 93.7 The Fan and asked if he was surprised by the team’s decision to release to release the veteran backup quarterback. In addition to being asked about Jones’ release, Roethlisberger was also asked to comment on how he now feels about having two inexperienced quarterbacks in Joshua Dobbs and Mason Rudolph now backing him up.

“Yeah, definitely,” Roethlisberger said. “I talked to Landry on Saturday and you know, we’ve been together now for I think six years and you’re right, he was so valuable to me. When I came off the field and having those eyes, and I trusted what he told me and that’s a lot. It’s guys like Charlie Batch, a Byron Leftwich, Bruce Gradkowski, guys like that. You’re talking guys like that, that you trust.

“I mean, to put Landry in that category with guys that when I ask a question, I know it’s not, ‘Hey, let me go find out you an answer.’ He knows the answer and he’s coming to you with a good one. So, it definitely was kind of shocking, but I guess I understand why they did it in terms of business-wise. You know, Landry, a free agent after this year, the other guys are a little cheaper and you can keep them, they’re under contract for at least three more years. So, and I think Josh and Mason have done some really good things as young guys.”

After Jones was released on Saturday when knew by Monday afternoon that Dobbs, who was selected by the Steelers in the fourth-round of the 2017 NFL Draft, would be Roethlisberger’s backup to start the 2018 regular season. Because of that, Roethlisberger said Tuesday during his radio interview that he’s already talked to Dobbs about what he’ll now expect out him as his backup moving forward.

“I talked to Josh yesterday and I told him, I said, ‘Listen, you need to now go prove to everybody that you deserve to be here,'” Roethlisberger said. “And I’m not talking about on the field, because he’s proven that, right? He’s proven what he can do on the field. We saw it on Thursday night and we’ve seen it in practice, but what he needs to do is prove that he’s as valuable as Landry was off the field, right?

“So, in terms of film study, when I have a question, having a good answer for me. When I ask him when I come off the field after a play, ‘Hey, what did you see here?’ That he can give me an answer and I trust that he gives me that answer. So, that’s where he’s really going to have to make sure that he steps up and he was all for it. He’s like, ‘Ben I’ll give you everything I can.’ And I trust that he will, because Josh is a very hard worker and he’s dedicated to football and to his craft and he’s very smart. And so, we’ll see how that kind of transpires as we move throughout the season.”

As a potential future rocket scientist after his football career comes to an end down the road, Dobbs is obviously a very smart player and it will now be interesting to see how long it takes for him to earn the trust of Roethlisberger when it comes to him being a similar set of eyes that Jones was. However, it’s good to know that Roethlisberger has already talked to his new backup about what he’ll expect out of him ahead of the 2018 regular season getting underway.