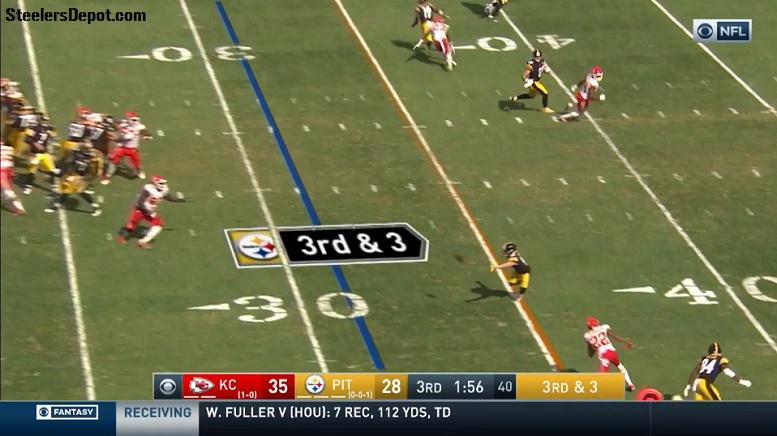 How many of you remember the failed 3rd down and 3 pass from Pittsburgh Steelers quarterback Ben Roethlisberger to wide receiver Ryan Switzer with 1:57 left in the third quarter and the home team trailing the Kansas City Chiefs 35-28? While the failed third down conversion certainly isn’t what lost the game for the Steelers, it was a failed opportunity to keep pace with Kansas City offense, which ultimately scored again on their next possession.

It’s always interesting to hear a quarterback break down plays after the fact and even more so when they talk in-depth about one that wasn’t successful. Roethlisberger did just that during his Tuesday morning interview on 93.7 The Fan when he treated us to a break down of the aforementioned failed connection with Switzer late in the third quarter of Sunday’s loss to the Chiefs.

“This is going to be kind of crazy to explain, but when the play call came in, it wasn’t the right play call on that particular time,” Roethlisberger began explaining. “So, we’ve got a quick little delay there on trying to get the right play call, but once we got it, we had like 10, 12 seconds [left on the play clock]. They showed us a defensive look that Switz was uncovered, like no one was covering him. So, I’m like, okay, the defensive end on that side of the ball has to drop and cover him. So, what I did was is I flipped the whole line over to pick up the blitz from the other side thinking that that guy’s gonna drop. And when that happens, no one’s blocking that defensive end because I am anticipating him dropping and covering the receiver.”

Let’s stop right here for a moment so I can tell you something about this play before the football is snapped. Roethlisberger is indeed correct about the play clock running down as the offense didn’t break their huddle until 18-seconds were left on it. Additionally, right before the ball is snapped and with 4 seconds left on the play clock, Roethlisberger gave instructions to his offensive line to shift protection to the left.

Now back to Roethlisberger’s break down of the play.

“And so, I should have been better, probably, especially since Switz is new being here, I need to point him [the Chiefs defensive end] out and say, ‘Hey, listen, we’re not blocking him. If he rushes, then you just need to pop off the ball and I’ll throw it to you quickly.’ I didn’t get a chance to do that, because I’m like, there’s no way that guy’s not coming, plus the play clock was running down.

“So the guy ended up rushing, so I think they blew a coverage a little bit. Well, Switz ran his route that he supposed to run, a quick-like five yard breaking out route. And I don’t have a lot of time because no one was blocking that guy and so I kinda threw it outside where he was going to go.”

Below is a look at the coach’s tape of that play from both the all-22 and end zone view. As you can see, while Switzer isn’t on the same page as Roethlisberger is as far as being “hot” on the play, the Steelers quarterback throws it to where he thinks his wide receiver will be. In fact, the route that Switzer runs seems to be more like a quick curl or comeback would be as he essentially just flashes his numbers after making his break and doesn’t continue to the outside. This makes it look like Switzer ran a “hot” route, but maybe 3 yards further up the field than he should have. Roethlisberger, however, has a good explanation for why Switzer ran the route he did.

“And now to add more to it, earlier in the game when he runs that route, I told him, if it’s a cover-2 look where that corner’s just sitting out there, don’t break out too fast because I don’t want you to break out into a corner and get hit,” Roethlisberger continued to explain. “So, he saw all those things happen and it didn’t break out quite far enough and I threw it, I had to throw it quick enough because I had to throw it early because the guy was blitzing. So, that’s a really long explanation, but it just was kind of something crazy that happened in game, unfortunately. Because if I can get to him and he pops off the ball, there’s no one around him for 15 yards.”

Just so you can see what Roethlisberger is talking about, I believe he was referencing his 14-yard completion to Switzer on 2nd and 6 from the Steelers 19-yard-line with 11:29 remaining in the second quarter. Below is a gif of that play from both angles and as you can see, it’s a cover-2 look as two safeties are deep. While the Chiefs didn’t have two safeties deep on the failed third down conversion to Switzer, it was a half cover-2 look to that side of the field and that’s likely what Switzer read as well.

While the outcome of this particular play was indeed unfortunate, do remember that Switzer is still very new to the team. In other words, he should be getting more and more on the same page with Roethlisberger over the course of the next several weeks.