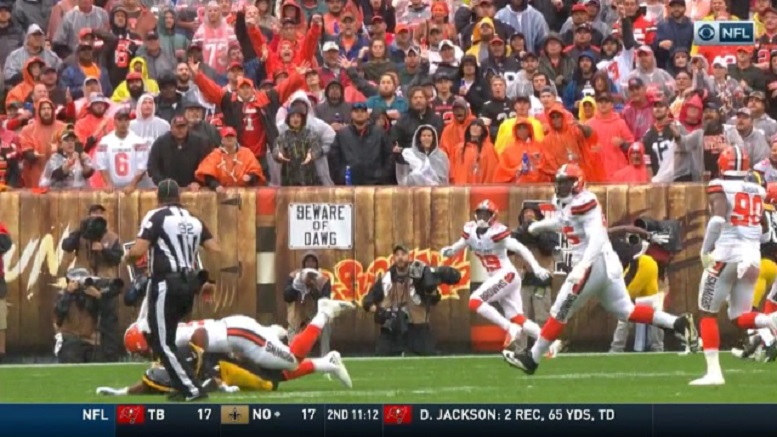 Sunday’s Week 1 game between the Pittsburgh Steelers and Cleveland Browns certainly wasn’t officiated very well. In fact, on Monday the NFL’s head of officiating, Al Riveron, reportedly identified one key penalty that went against the Browns on Sunday that shouldn’t have been called.

According to Tom Pelissero of the NFL Network, Riveron, said Monday that officials erred when they penalized Browns defensive end Myles Garrett for roughing Steelers quarterback Ben Roethlisberger after a third down incompleted pass on a 3rd and 8 from the Cleveland 8-yard-line with 11:28 left in the second quarter.

“The rule specifically says ‘most, if not all, of your body weight,'” Riveron told Pelissero on Monday. “So we want that player to make an effort. And the last three or four weeks, we have pulled extensive video to show the clubs exactly what we’re talking about, and we probably last week showed 5-to-1 or 6-to-1 of legal hits, or legal contact, as opposed to illegal contact. Because the question we get all the time is, well, what do you want our players to do?

“Well, they have to not put the weight on the quarterback. And this one (on Garrett) yesterday showed, even though there is some body weight on Ben, this is not what we would consider contact that rises to the level of a foul.”

The penalty on Garrett obviously gave the Steelers offense an automatic first down at the Browns 4-yard-line and running back James Conner scored a rushing touchdown on the very next play. The extra point from kicker Chris Boswell followed and Pittsburgh had themselves a 7-0 lead.

Had Garrett not been hit with a roughing the passer penalty on that play, the Steelers would have probably sent Boswell out to kick a field goal in lieu of going for it on 4th and goal.

Riveron reportedly also told Pelissero on Monday that four other flags thrown for players landing on quarterbacks in Week 1 were correctly called as penalties under a longstanding rule that prohibits a player from landing on the quarterback with most or all his body weight, which is apparently an area of emphasis for officials this year.

Additionally, entering the two Monday night games, 14 roughing the passer penalties have been called in the already completed Week 1 games. That’s reportedly twice as many as in all of Week 1 last year and more than double the average of 6.8 per full slate of games over the past three seasons, according to NFL Research. Of those 14, 12 were correct, Riveron told Pelissero, including four of five violations of the body-weight rule.