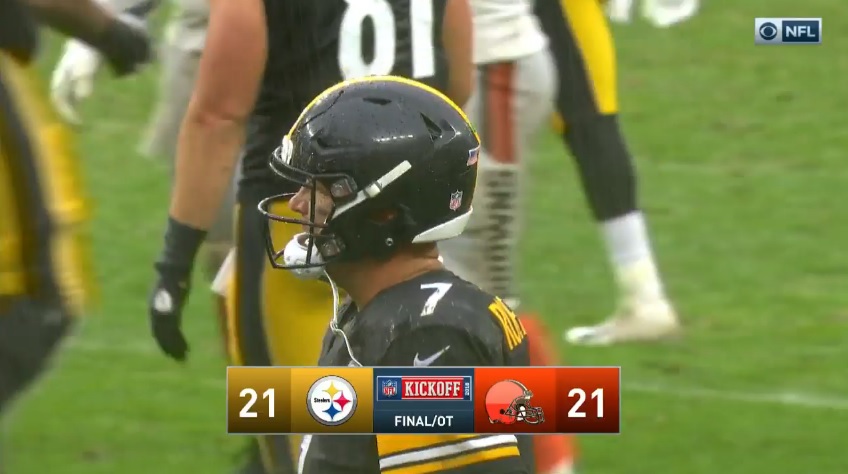 I woke up around 6AM Sunday morning feeling extremely excited. Many people in Steelers Nation must have felt the same because my twitter feed was filling up with comments from others saying they woke up excited – or didn’t sleep at all.

The regular season is finally here with the games that count. I arrived at my regular Pittsburgh Steelers hangout in Derwood, Maryland before 11:30. The Outta the Way Café already had a few folks wearing Black & Gold scattered around several tables. It was standing room only an hour later. A couple of folks stood next to me through the whole game.

There were some murmurs after the announcers named the inactive list. Dan McCullers was playing in front of LT Walton. The prevailing opinion was the big man got the helmet because of the weather. It may be a running game and he could plug up the middle. I’m not sure he played much but before kickoff it gave us something to talk about.

The offense was not on track the first three drives. Two punts and Ben Roethlisberger inexplicably throwing into triple coverage. The interception cost the Steelers at least three points. James Conner was a bright spot. He punctuated the 4th drive with the only score of the first half. Maurkice Pouncey and Ramon Foster were jumping in joy. Pittsburgh was driving to end the half with a score, but Ben’s pass bounced off the hands of Jesse James allowing a Brownie to intercept it. Bud Dupree stepped up for a strip sack to stifle a Brown’s drive.

The defense played well in the first half. The Cleveland Browns had to punt in five of their six possessions and wisely let the clock run out after Dupree’s play. What was worrisome was Pittsburgh should have put three scores on the board but instead only led 7-0. The Black & Gold was letting Team Brown stay in the game.

Cleveland punched Pittsburgh’s defense in the mouth to open the second half. The Browns only sustained drive of the game was aided by a veteran suckering a rookie. Jarvis Landry slapped Artie Burns in the helmet – which is a penalty if the referee saw it – and Burns reacted and threw Landry to the ground then took his helmet off. Landry played Burns like a rookie; you must keep your cool. Like hockey; the penalty is regularly called on the player who retaliates since the first infraction is often missed. Burns is no longer a rookie and should know better.

Regardless, Cleveland’s offense played smashmouth football for a drive running by committee with Tyrod Taylor scrambling in for a 19-yard touchdown run. Speaking of rushing, James Conner had a fine day gaining 135 of the Steelers 159 yards on the ground. Sadly, not noticed is that the Browns committee of three running backs and a quarterback outgained them with 177 rushing yards. Yoi.

The next Pittsburgh score reminded me of the 7-shots drill Pittsburgh practices at Latrobe. This time it was three shots. Referees negated the first score by a phantom hold call on Maurkice Pouncey. Then the referees negate a second score by calling Marcus Gilbert for hands to the face – missed earlier against Landry. Ben then connected with Antonio Brown for the third touchdown but the only one that counted to break the tie.

The referees put their whistles in their pockets for the next Pittsburgh drive. James Conner scored his third touchdown (only two counted) with some strong running. He also had some nice catches. His five receptions for 57 yards averaged over 10 yards a catch to add to his total yardage for the game.

Cleveland threatened to score but Joe Haden made a big-time play knocking the ball away from Josh Gordon in the end zone. Terrell Edmunds followed it up with a nice break-up of a Taylor pass intended for David Njoku. The Browns ended up punting.

Pittsburgh driving again but were facing a 3rd and 1. This is where Pittsburgh would run a toss sweep or throw long down the field. Ben goes up behind center and does a quarterback sneak to extend the drive! Randy Fichtner you are the toast of the town for the moment. There was almost as much celebration as Antonio Brown’s walk off touchdown against the Baltimore Ravens two Christmases ago. Okay, I exaggerate a little but not by much.

Unfortunately, the Steelers cannot get into field goal range and settle for a punt. Cleveland gets nowhere, and they punt pinning the Steelers deep. Jordan Berry punts yet again and the ball bounces off Nick Chubb and Sean Davis recovers the ball. Yet, the referees don’t call it. The replay showed the ball’s trajectory change as it caroms off Chubb’s helmet. The café erupts in cheers as Mike Tomlin throws the challenge flag. The crowd then gags in disbelief as the referees allow the call to stand. Roger Goodell’s striped flying monkeys strike again.

It is around this time; I recall a recurring nightmare of the Pittsburgh Steelers leading the Oakland Raiders by 14 points with less than five minutes to go in the game. The Raiders quarterback was Ken ‘Snake’ Stabler and they scored 17 unanswered points against the mighty Steel Curtain to win 31-28. Someone reminds me that Tyrod Taylor is not Snake Stabler. Yet, there is more than five minutes left and the 2018 Steelers defense is not the Steel Curtain.

The referees miss a peel back block that laid Bud Dupree out, but the Browns can’t convert a 4th down. As Chuck Noll would say, “you have to play better than the refs, ref.” A long Pittsburgh drive with a score could put the game away. Then, Myles Garrett stepped up big and stripped the ball from James Conner. Jabrill Peppers nearly scored on the fumble return. The Browns two 2017 first round draft picks combined for a huge turnover.

Ben mishandled a snap and Garrett forces a second fumble. Pittsburgh forced a punt, but my nagging fears continued. Pittsburgh is looking inept in the 4th quarter and the Browns fans are back in the game after they had started heading for the exits.

Cameron Sutton was playing in place of Joe Haden who left with a hamstring injury. Predictably this is where the Browns started targeting their passes. Tyrod Taylor victimized Sutton twice; the second time a touchdown pass to Josh Gordon to tie the game. The Browns had a chance to win in regulation and tried to take advantage of Sutton a third time, but he intercepted a pass intended for Gordon to force overtime.

Pittsburgh did what was needed to win the game in overtime … at least most of the time. The defense forced Cleveland to punt twice and the offense gained enough yardage to put Chris Boswell in position to kick a 42-yard field goal. Unfortunately, Boswell, who just signed a four-year contract extension for $16.8 million plus a $6 million signing bonus, missed.

Marcus Gilbert was beaten by rookie Genard Avery who strip sacked Ben. Cleveland lined up to kick the winning field goal. But, T.J. Watt who played well all game burst in to black the kick and preserve the tie. With both the Cincinnati Bengals and Baltimore Ravens winning; the Pittsburgh Steelers share the AFC North basement with the much-improved Cleveland Browns.

A longtime Cleveland fan texted me with, “at least we didn’t lose.” For them it is a victory of sorts. For me, it feels like a loss. Bad officiating aside, Pittsburgh cannot expect to win many games by turning the ball over six times. Cleveland played hard and finished strong in the 4th quarter; while Pittsburgh wavered. Not a clever way to start the season at all.

The Steelers Depot 1st half Live Update and Discussion Thread performed below the standard with only 911 comments. As several respondents pointed out, the Steelers weren’t giving them enough to talk about. Fair given the 7-0 halftime score. Our fearless leader Dave Bryan had the best rated comment with his opening greeting, “Happy Week 1. Roll call. Who is here?” John Noh found good in the first half, noting “Very encouraging blocking by Connor!!!!” he also found bad, adding “Are the refs paid by the flag now???”  Early in the game before Roethlisberger’s interceptions and fumbles, Mister Wirez stated, “Skinny Ben > Fat Ben.”

The 2nd half Live Update and Discussion Thread exploded for 1570 comments. Mister Wirez led the way with “First of All there should be NO Ties.” The Beaver Falls Hosiery Company (me) seconded that sentiment with, “A tie is a Browns win and a Steelers loss.” Rob explained that “Ben threw for 4 interceptions against the Browns. Don’t blame Bell. Don’t blame Tomlin. This is 100% on him. Period.” While the Generic Steelers Fan marveled, “QB sneak and this thread EXPLODES!” 2,481 comments some not proper for all audiences during a very frustrating game. Thank you, Matthew Marczi, for keeping us updated and managing the thread.

I’m giving this game another 36 hours of rumination then moving on. The Kansas City Chiefs are coming to Pittsburgh this Sunday and I am going. Mike Tomlin has less than a week to right this ship called the Pittsburgh Steelers.

In the 2018 Memorial Day Weekend: Steelers Friday Night Five Questions, I committed to play songs that Steelers Depot respondents had suggested might be the new Steelers anthem if Renegade by Styx was ever replaced. Here is entry 19 of 45 from Jeremy: Ratchet by Bloc Party.