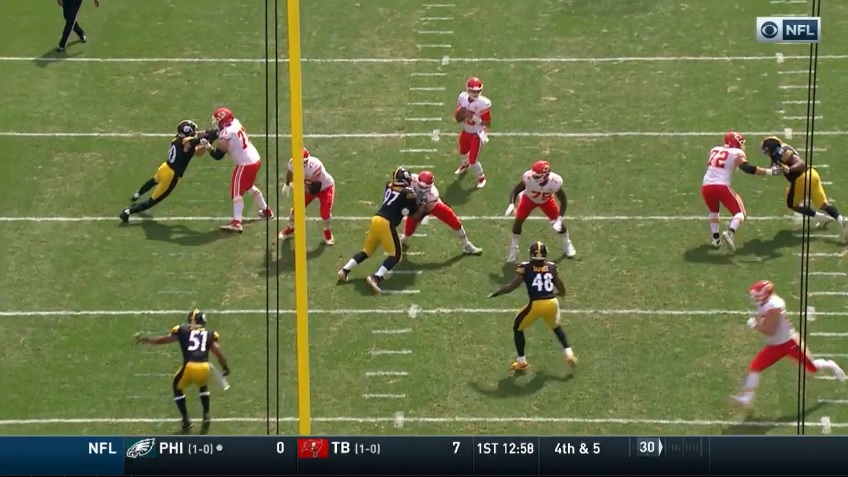 The Pittsburgh Steelers played as if it was their 5th preseason game with the first team getting an extended look. At least, my scribbled notes early in the first quarter say it. This game reminded me of the last year’s playoff game against the Jacksonville Jaguars, an event I’d rather not recollect.

Everyone’s going to say no defense = no win. But like the Jaguars playoff game the offense’s slow start put the team in the hole. This game Berry’s poor punts added to the hole. @Steelersdepot

The Steelers fans were booing the Black & Gold within 3 minutes 20 seconds of the opening kickoff. Specifically, they were booing the offense which had just completed their 2nd three and out to open the game. The third drive showed some promise but ended with Chris Boswell missing a 49-yard field goal attempt. The Kansas City Chiefs responded to Pittsburgh’s offensive sluggishness with three straight touchdowns.

Ben Roethlisberger overthrew James Washington who was behind his defender on the very first play. That would not be the last time Ben missed a Steelers receiver who had an advantage on the Chiefs secondary. There was no running game to speak of. When you spot the other team 21 points there is little time for it. Ben threw 60 passes with only 13 runs. Yes, the Steelers scored 37 points but always in a desperate Heinz effort. They were trying to catch up.

There were some highlights. James Washington scored his first career touchdown. Jesse James caught five passes resulting in a career high 138 receiving yards. JuJu Smith-Schuster led with 13 receptions adding 121 yards. Antonio Brown nine catches. James Conner made a heroic effort to score from the 1-yard line and caught five balls. He also had converted a two-point attempt with a reception. Pittsburgh had no turnovers and the offensive line kept Ben clean, he was only sacked once. However, until this unit can open games with speed and effectiveness, I will not give them a passing grade.

This unit was putrid from the first to the last play. I initially blamed Jordan Berry for the first punt return but the coverage unit did not help. He kicked it way from Tyreek Hill and didn’t quite get the ball out of bounds, but even after fumbling the ball De’Anthony Thomas was able to return the punt 48 yards. A penalty on the final Kansas City punt negated any opportunity to throw even a Hail Mary pass.

Boswell missed a point after touchdown attempt in addition to the failed field goal. The Steelers best starting position in their first nine drives was their own 25-yard line. Ryan Switzer’s four kick returns averaged 16.8 yards and he had one punt return for 6 yards. He is a shifty runner. To me, it shows a problem with the return blocking. Right now, the best strategy is allowing touchbacks.

Until the 4th quarter. The Chiefs worst starting position was their 25-yard line. Boswell’s kickoffs were deep enough to prevent any returns. Berry did have a punt that skittered out at the one and I believe a Steeler was in position to down the ball if it had gone toward the end zone. That led to the safety which did get Steelers fan roaring in the 4th quarter. The popular opinion is that the Steelers should cut Berry, but he is far from the special team’s unit worst problem. He averaged over 46 yards a punt and aside from the first, he only had one other punt returned and that was for 6 yards. He was directing his punts away from the extremely dangerous Chiefs return men.

Antonio Brown was back with Switzer to return the kick after the safety. A penalty erased his first good return, he returned the second 20 yards.

From my seat in the stadium, I could not name a single defender who play exceptionally well. Dan McCullers sacked Patrick Mahomes. Cam Heyward forced a fumble. The defense scored a safety. Unfortunately, the defensive splash plays were few and they looked confused at times. More than once, Kansas City lined up to snap the ball and Steelers were racing onto or off the field with late substitutions.

Travis Kelcie and Tyreek Hill abused the Steelers defense. Steeler’s defenses stymied these two in earlier games but not this time. Their joint efforts resulted in 12 completions for 199 yards and 3 touchdowns. The Steelers did try to shut them down, but those efforts just let Sammy Watkins shine. Watkins added another 6 catches for 100 yards plus a 31-yard run.

In this game, the Steelers did not appear to blitz too much. The problem is that neither Cam Heyward nor Stephon Tuitt achieved much penetration. One improvement is that there were few plays when receivers were wide open, but linebackers were often trailing, and the Chief’s receivers outmatched the Steelers secondary.

Mahomes’ quick passes were on target and when he was out of the pocket it appeared by design. A defender had to hedge between protecting a run or covering his receiver and the Chiefs played keep away. Stay with the receiver, Mahomes runs. Lean toward Mahomes and he lofts it over the defender to his grateful teammate.

First, the Steelers are very unlikely to make any changes in the middle of the season. Mike Tomlin is the head coach and will remain so the entire season. Randy Fichtner is new at offensive coordinator and he will remain. I was surprised but then impressed when he ran the third or 4th series without James Conner. The switch up in scheme did result in the offense gaining some ground on the Chief’s defense.

Danny Smith must do something because four of five special team phases are dysfunctional. The kick return unit can’t get beyond the 25-yard line. The punting unit allowed a big return leading to the opening Kansas City score. The punt return unit players penalized which prevented the offense from taking the field one last time. Boswell is missing field goals and PAT’s. The only reason the kickoff unit gets a pass is that Pittsburgh chose to kick deep allowing Kansas City to start at the 25-yard line instead of trying to pin them, so they were untested. Danny Smith is here for the rest of the season.

Keith Butler’s buttocks may be feeling warm when he sits down. Steeler Matt texted, “Last two home games, the Steelers scored 79 points & lost both of them.” The communications issues that Butler himself identified at the start of last season continue. After the game, I heard a longtime Steelers radio host blame it on the crowd noise. He said the defense would have an easier time at away games since it would be quieter. Excuse me? Steelers fans have made a lot of noise with the defense on the field since I started to regularly watch games in 1972. Figure it out and fix it. Keith Butler is here for the rest of the season.

Mike Tomlin and his coaching staff must address the lapses. I am no fan of NFL referees, but the 12 penalties called on Pittsburgh were indeed penalties to my eyes. Players blocking in the back on special teams or offense. Encroachment on defense. Late substitutions on defense. The defensive play calling, and the special team’s blocking schemes need drastic improvement. The other NFL teams are playing regular season games and Pittsburgh appears to be in preseason mode. Players appear befuddled during interviews. Snap out of it.

As mentioned earlier, Steelers fans were booing early in the game. Their patience has worn thin. On the other hand, two minutes before the end of the game, the stadium was as loud as I’ve ever heard it. The fans will roar if the players give them something to cheer about. However, the fans will boo if the team continues to underperform.

As I told folks leaving after the final whistle, it’s a long season. A long season is good if the Steelers start winning some games. There is time to for the players in Black & Gold to prove that this is a Super Bowl caliber team. But if the current trend continues it could be a long season.

I’ve hesitated from looking at the Steelers Depot Live Blog & Comment Thread but will do so now:

The “best” of the 1,224 comments in the 1st Half thread  Canadiana asked, “Anyone else watch that segment on James Conner during Sunday countdown? Didn’t think I could like the guy any more. I was wrong.” Michael James captured the early mood of fans with, “Hahahahahahaha, this team is so horrible. Coaching is just embarrassing (yep, if you have those glaring communication issues year after year, it’s on the communication).”

1,174 comments in the 2nd Half Thread. Hope Harveys lamented “Man, those 4 points Boz left on the field really hurt.” #7 got excited or perhaps sarcastic following a touchdown with “Boswell made it! Boswell made it!” However, Sammacdon got a lot of agreement by saying “So last three performances by D include giving up 500 points to Bortles, a fourth quarter collapse against the Browns, and giving up six touchdowns and a near perfect passer rating to a guy in his second start. All with a defense full of first round picks. Serious question, will I be accused of being a dumb yinzer if I at least ask if the D.C. Is on the hot seat?”

In the 2018 Memorial Day Weekend: Steelers Friday Night Five Questions, I committed to play songs that Steelers Depot respondents had suggested might be the new Steelers anthem if Renegade by Styx was ever replaced. Here is entry 21 of 45 from Jeremy: One Way or Another by Blondie.