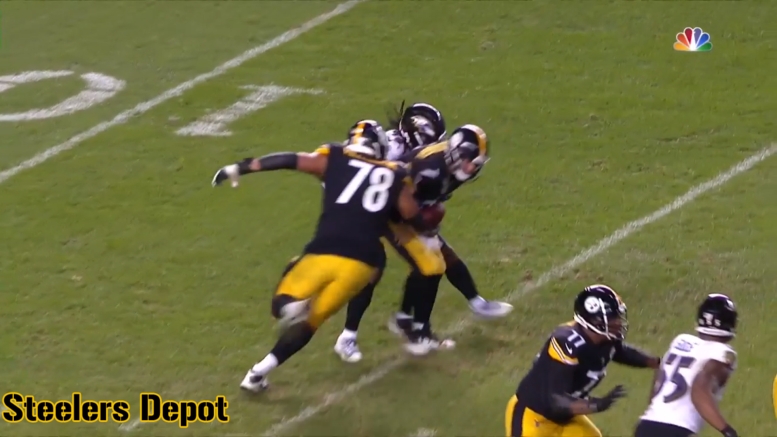 And it shouldn’t but much surprise that the team was unable to get those 14 points to stand. For one thing, they were already trailing 14-3, so getting to 14 points on tied the game. But Pittsburgh’s inability to get things going on offense after halftime is quickly becoming a major concern.

Part of the reason for the struggle has been, admittedly, the defense’s inability to get the opposing offense on the field. both the Tampa Bay Buccaneers and now the Baltimore Ravens tonight were able to put together some long, clock-killing drives in the second half, keeping Ben Roethlisberger and company off the field.

That’s not to say that there wasn’t plenty of ineptitude to go around. And Roethlisberger was as responsible for it as anybody, his accuracy and decision-making showing real questionable characteristics pretty often. He had a lot of passes touched by defenders, including an interception that came already when it was close to being too late for a comeback.

Roethlisberger barely had 50 yards passing in the second half after having over 220 in the first. In six second-half drives, the Steelers failed to register a single first down, resulting in two punts, an interception, and a turnover on downs on those occasions. Obviously, the other two drives also resulted in punts.

In fact, he only completed one of his final nine passes, and that was for a nine-yard gain. He went seven for 18 overall in the half, the biggest completion going for 15 yards on a checkdown to running back James Conner. And one of those completions went for a loss of five yards.

He also lost the ball twice on pump fakes. When that happens, I guess you just know that it’s not your night. Even when it looked like it could be in the first half. I don’t know what Mike Tomlin said to the team in the locker room the past two weeks, but perhaps he should work on a new routine, because he is depressing the troops.

And the fans. It’s getting harder and harder to watch even for me, and I consider myself to be as even-tempered as a Steelers fan gets.