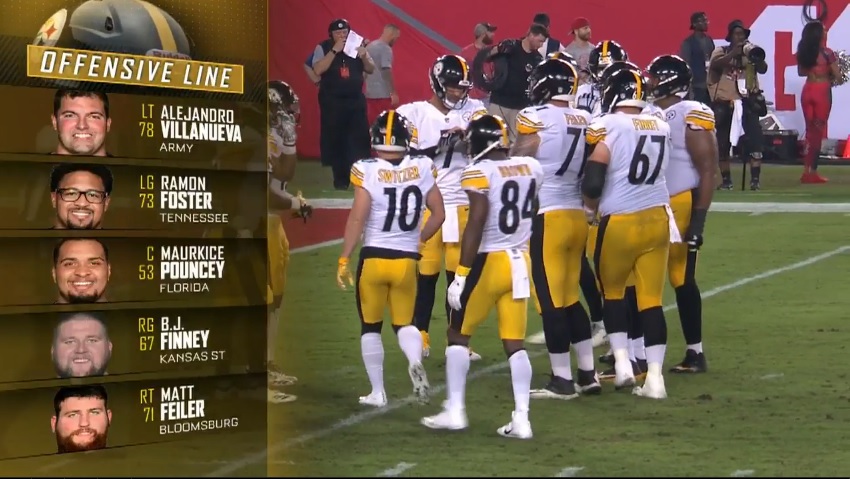 It’s been a long time since Matt Feiler started a game at tackle. 2013, to be precise. And though last night may not have always been perfect, Mike Tomlin is pleased with the end result.

“I thought Matt did an awesome job,” Tomlin said when asked to evaluate Feiler’s play. “Thank you for mentioning that. I”d be remiss if I didn’t. Not surprised by it. We don’t take our contributions from our starters in waiting for granted. We expect those guys to perform well but at the same time, we appreciate it.”

Feiler’s journey has been quite the ride. Undrafted from Division Two Bloomsburg on the other side of Pennsylvania, the Steelers scooped him up from the Houston Texans in 2015. Like so many UDFAs who have gone from obscure to starter, joining Ramon Foster, Chris Hubbard, B.J. Finney, and Alejandro Villanueva, Feiler climbed the ladder from practice squad to the 53.

Despite the team drafting Chukwuma Okorafor, Pittsburgh chose Feiler to replace Marcus Gilbert, a sure-fire vote of confidence. The situation was made all the more complicated by David DeCastro missing too, putting Finney at right guard, but Tomlin said he expected an above-the-line performance from both. Based on his comments, he got it last night.

“Guys like B.J. Finney over the last several years have had an opportunity to prove he’s capable in those ways. Matt hadn’t had a lot because we’ve had guys like Chris Hubbard. So for him to get an opportunity, I think that’s his probably his second start, and play the way he played and be part of a winning performance is big for him and big for us.”

It was just the second start of Feiler’s NFL career, following the Week 17 nod he got at guard in the regular season finale against Cleveland last year. He’s become the new Swiss Army knife, having played every spot along the o-line sans left tackle during training camp and the preseason.

Despite depth being tested repeatedly this offseason, Mike Munchak and the Steelers are proving this offensive line can still win with the new faces who embody “next man up.”