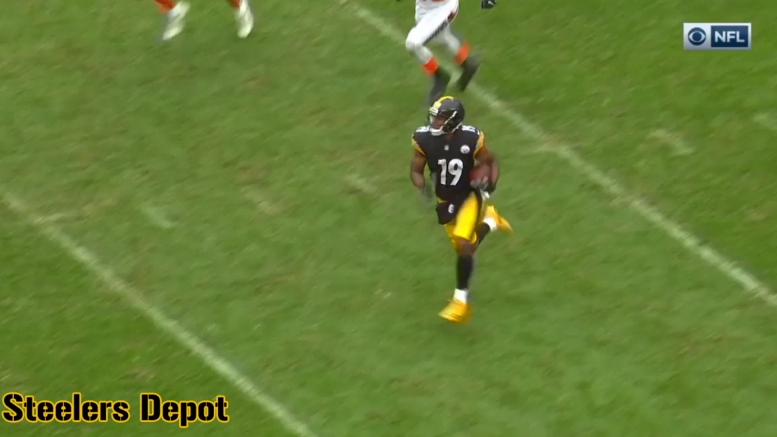 No wide receiver in the NFL has been more impressive out of the slot so far during this young season than has Pittsburgh Steelers second-year player JuJu Smith-Schuster, who according to Pro Football Focus led the league in yardage from out of the slot entering Sunday’s games—and it wasn’t that close.

Through the Steelers’ first two games, Smith-Schuster accumulated 207 yards when lined up in the slot on 12 receptions off of 19 targets, which also included his two-yard touchdown last week. That is two thirds of his 18 receptions in the year, and over 86 percent of his 240 total receiving yards.

While the stats websites are still updating to include the results of yesterday’s games, the next-best player through the first two games of the season this year had been Randall Cobb of the Green Bay Packers, who recorded 163 yards on 12 receptions with one touchdown while lined up out of the slot. He only caught four passes for 23 yards yesterday in total, let alone out of the slot.

The second-place player overall in yardage out of the slot was Jarvis Landry with 180 receiving yards, on 14 receptions. But the Cleveland Browns have already played three games that have factored into the site’s numbers, so he’s actually averaging only 60 yards out of the slot per game, while Smith-Schuster is averaging over 100.

Through the first two weeks of the season—including two players who participated in Thursday’s game—only 10 players had recorded at least 100 receiving yards out of the slot. That does extent to 12 players in total if you include all skill positions, as two tight ends—O.J. Howard and Jared Cook—have also hit that mark.

Last season, Smith-Schuster still ranked 13th in the league among all positions in receiving yards from the slot, gaining 527 yards on 27 receptions, with five touchdowns. It was 11th among wide receivers. That is impressive given that he only played in 14 games, and was only targeted in 13.

The only player above him who played in fewer games was the New York Giants’ Sterling Shepard, who was nearly exclusively used out of the slot, while Smith-Schuster saw extensive time outside last year. The latter in fact had nearly 200 more total receiving yards. Larry Fitzgerald led the league with 779 yards out of the slot.

There has not been a player that recorded at least 1000 yards out of the slot since 2015 when Doug Baldwin did it for the Seattle Seahawks. Cobb also did it the year before, and Wes Welker in 2012. Both Welker and Victor Cruz were able to put up over 1100 yards in 2011.

But overall, it’s been just as common as not for a year to go by with no player achieving that feat. It’s incredibly early, but Smith-Schuster has a chance to put up some crazy numbers out of the slot the likes of which have not been seen at least in the PFF era, and perhaps ever.