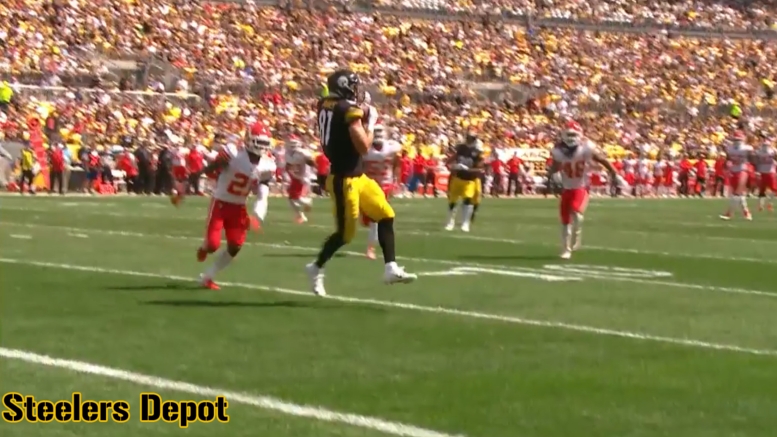 I think it’s safe to say that Jesse James had a game on Sunday for the Pittsburgh Steelers that he had never had before. And the honest truth that it is one that he quite likely may never have again. The fourth-year tight end caught five passes for 138 yards and a touchdown, with four of those receptions going for at least 20 yards.

What is significant about that? Well, throughout his entire career, he had only had five receptions of 20 yards or more, and that included one from the first week of the season. So he matched in one game the number of explosive plays that he had in the prior three seasons combined.

While those explosive plays were not of the typical down-the-seam receptions that Travis Kelce was making for the Steelers’ opponents on the same day, they were still impressive in their own way, rather a byproduct of his football intelligence, his ability to improvise and adapt, to be o the same page as his quarterback.

“The tight end position for our Team of the Week would have to come from the highest-scoring game of the week”, the entry reads of the Steelers tight end. “James made a huge impact as a receiver, leading all tight ends with an average of 4.93 yards per route run”.

The site gave him a grade of 91.1 for the game, including a strong grade in pass protection, though they graded him below average in run-blocking, but the team did not run the ball very often anyway. He had a very good run-blocking grade in the season opener, for what it’s worth.

James is in a contract year and is still finding his long-term role. The Steelers have attempted to find an alternative starter for three seasons now, and that includes this season with Vance McDonald, who missed almost all of training camp and the season opener with an injury.

McDonald did get back on the field for Sunday’s game, and he caught a few passes, but also drew a couple of penalties. His return did eat away from James’ total workload, but the latter should still see a decent number of snaps, even when the former gets fully back up to speed, perhaps with an uptick in two-tight end sets.